The Benefits of a Highly Attuned Bullshit Filter

One of the best things about getting older is that you’ve had a lot of practice at sniffing out deception from sales clerks, public service reps and other people you encounter throughout your day.  It can turn you into a really suspicious SOB, that’s for sure.  But it comes in handy.

Take, for example, a couple of weeks ago when I was heading home from work via the Baltimore Metro subway.

When I got down to the underground platform at the Shot Tower stop, I heard them making an announcement.  Not that I could actually hear what they were saying.  Even after I took my earphones out, it sounded like Charlie Brown’s teacher: “Whonk whonk whonk…”

Everyone else must have understood, though, because they all started heading back up to ground level.  I joined them but when I stopped at the little glassed-in room where the attendant is, she was hollering to the crowd, “The subway is closed.  Please go to the nearest bus stop up on the street.  They know what is going on and will take you where you need to go.  And I am NOT taking any questions.”

OK, there’s so much to dissect there, but first off, you’re “not taking any questions???”  What kind of civil servant are you?  There’s mass confusion here and you’re actively promoting it by withholding information!  So that got me all jammed up right off the bat.

Still, I waited until the crowd thinned out a bit and she started talking with more people.  Ever the rebel, I dared to ask a question, “Did you say the whole subway line is shut down, or just this station?”

She said the whole subway was shut down.

That got my BS detector pinging.  I figured, there are only two things that will shut down the entire system.  One is a massive, area-wide power failure (which we obviously weren’t having).  The other would be a bomb threat.

While a bomb threat was certainly possible, I thought it was highly unlikely.  Why would anyone care about our piddley one-route subway line, when you’ve got a much more expansive and widely used subway system right down the road in Washington?  Or one that was much more heavily traveled in New York City?

Nah, something was off here.  Most likely, someone fell or jumped onto the tracks and ate a subway car.  It wouldn’t be the first time.

The other thing that I was skeptical about was that crap about just going to the nearest bus stop and waiting for a bus, who would know what’s going on and where to take everyone.  Huge, steaming pile of BS, right there.

Each bus has its own route and there are dozens of them running throughout the day.  What are the odds that the closest particular bus is going to run in the direction I need to go?  Minimal, if you ask me.  I was NOT going to go get on some random bus.  Lord knows in what kind of urban hellscape I might end up?

So I came up out of the subway and began to consider my options.  One of them was to walk about a block and then jump on the east/west Charm City Circulator line to take me over to the light rail.  (The Circulator is a free commuter bus service for downtown Baltimore.  The light rail is a 2-car on-road rail line, powered by overhead electrical lines.  It runs straight north/south through Baltimore and the surrounding areas.)

So as I was waiting for the Circulator, it dawned on me, “Dummy, this is no good.  So what if you get to the light rail?  Your car is still at the subway parking lot!  You’d still be stranded.”  (The subway and light rail only intersect near Lexington Market, in downtown Baltimore.  My home neighborhood is another 10-12 miles north.)

I stepped away from the Circulator stop and decided to go back to the subway.  I figured I might be able to pull out some more information.  The MTA website was no help.  Service had been shut down for 20 minutes and they still showed “On Time” status for the subway.  Useless.

When I got back to the subway, there were two guards at the top of the escalator, preventing people from entering the station.  There were several clusters of people standing around, peering at their cell phones.  I went up closer to the guards and overheard them tell another passenger that the problem was at the next station over, Charles Center, where they thought someone got hit by a train.

Aha!  Just as I thought.  This is highly relevant because I know for a fact that whenever there’s any kind of incident at a subway stop, they just close off that stop and continue service on either side.  They either provide a bus to bridge the gap or fly straight through without stopping at the station in question.

My original plan was back in play.  As I was reasoning it out, I was joined by another commuter, a woman with a nice “Island” accent.  She asked what was going on, I told her what I’d heard, and what I was considering next.

I told her I was going to jump on the Circulator Orange Route, take it the 11 blocks west, then walk a few blocks north to Lexington Market station and catch the subway on the other side of the station closure.  She wasn’t familiar with the Circulator routes, so I invited her along.  It’s much more fun to have a travel buddy. 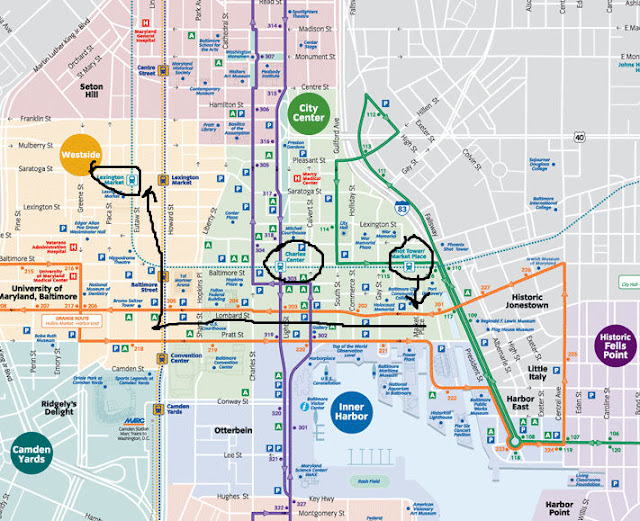 So that’s what we did and it worked like a charm.  Once we got to Lexington Market, we heard several more versions of what happened back at Charles Center.  It’s funny how word travels on the street.

When these things happen, the MTA never tells you anything, like they’re afraid of getting sued, or of bad publicity.  I think it would help their cause if they could demonstrate that they were truthful and cooperative, rather than dishonest and evasive.

The Lexington Market station was crowded with others who were scrambling to find their ways home.  We saw two trains heading back in the direction from whence we came before one finally came along from the right direction.  Of course, it was packed, but by that time, I was happy to jam onboard under any conditions.

All along, I knew I could use this occasion to try Uber for the first time, but I kind of kept that in my back pocket.  I’d rather demo Uber when I’m not in a state of duress, but I knew I could always use it if nothing else panned out.  But as it was, I went from “Holy shit, I’m stranded downtown with no way home,” to getting on the train at another station an hour later.

I’ll take it.  I know many people who have had it worse when faced with an unexpected subway closure.  But it would have been so much worse for me if I hadn’t disregarded almost everything I was told by subway “officials.”

At work the next day, I talked to some people who DID get on the bus and they said those bus drivers didn’t know squat about what was going on.  They didn’t even know how to get where they were supposed to go… the passengers had to direct them.  It was a total clusterfuck.

There was practically no coverage of the incident in the local media.  The only thing we found was a short blurb from a minor news page, giving only the minimum of information; someone jumped onto the tracks, was hit, but survived.

The important part, of course, was that I was inconvenienced during my daily commute... LOL.

No, really, the reason I’m telling this tale is to highlight the importance of a healthy skepticism.  Public officials lie to us, misdirect, or obfuscate constantly, so it behooves us to develop a stringent BS filter.  If someone tells you something that seems too good to be true, especially given the general incompetence of those they’re talking about, it should be sifted through the filter and disregarded.

Or else the next thing you know, you could be trapped on a crowded bus heading for parts unknown.  It’s enough to make you want to jump on the tracks yourself.
Posted by bluzdude at 6:13 PM