Hey Bluz, what do you think about…

…the boycott of North Carolina?  National politics gets an awful lot of attention but the real news is happening at the local level.  Once you have one-party rule between a governor and state representative bodies, just about anything can get put into law.

That’s what happened with this mess in North Carolina, where the legislature borrowed language from a conservative website (specializing in creating legal language for use in bills), rammed it through the legislature in a single day and had the governor sign it the next day.

This wildfire process was executed because the city of Charlotte dared to pass their own “equal protections” law, which included discrimination shields for sexual orientation and gender identification.  The state law contained a whole slew of rollbacks, including the infamous “bathroom of your biological origin” edict.  It also banned municipalities from instituting their own protections, banned people for suing the state over the issue, and just for shits and giggles, prevented any municipality from raising its minimum wage.

Because the country has progressed so far in accepting the existence of gays and transgenders, (especially among the young, money-spending generations), businesses have stepped up to the plate to take direct actions in sanctioning the state.

PayPal and Deutsche Bank abandoned plans to build facilities there.  CEOs of more than 80 corporations signed a letter condemning the law and hinted at taking further action.  Several music acts have cancelled shows, including Bruce Springsteen, and Ringo Starr.

In response, the governor issued an “executive order,” which he claimed addressed the concerns of those opposed to the law.  Unfortunately, the executive order doesn’t really do anything to change the conditions on the ground or in the bathrooms.

I really don’t get this whole bathroom thing. Why are conservatives so obsessed over who’s in the bathroom?  They claim it’s all about safety, but that’s about as valid as their claim that their Voter ID laws are all about stopping voter fraud. 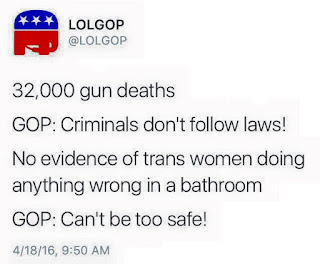 It seems to me they’re running in a blind panic over the prospect that there are people out there who they don’t understand in the least, and who might have to pee.  Like with the “voter fraud” issue, they’re putting out draconian laws designed to prevent a problem that’s not really a problem.

Show me one headline about some guy dressed like a girl, camping out in the bathroom with the intent to harm or perv on the other bathroom users.  You can’t.  It’s a solution in search of a problem, which just happens (coincidentally!) to go hand in hand with a Bible Belt government trying merge church and state... and making sure gays don't get too big for their britches.

You think a trans guy dressed as a woman is going to feel safe in the men's room?  I'm sure that's part of the plan too... GOP Trans Therapy!  By getting their asses kicked in men's rooms, someone just might knock some sense into them.

Maybe cooler heads will prevail in North Carolina when enough economic pressure is brought to bear, but I doubt it.  You can’t pressure ideologues.

Just look at Kansas.  Their entire state is falling apart due directly to unchallenged Republican leadership instituting Republican tax and budget policies.  Within a year of said changes, they have a huge deficit and no money for education or infrastructure.  But have they reversed course?  Absolutely not.  Have you ever heard a Republican admit a mistake?  You think there’s any possible way they’ll admit that top-side, trickle-down economics works for anyone but the top side?

I just wonder what’s going to happen in Mississippi.  They passed a law similar to North Carolina’s, but as far as I can see, there’s nowhere near the same corporate disincentive effort going on.  I suspect it’s because there aren’t that many businesses looking to move into Mississippi in the first place.

…Axl Rose joining AC/DC to finish off their current tour?  I was really hoping it wouldn’t come to this.  I mean, Axl Rose is a great lead singer… for Guns & Roses.  I heard a clip on the radio this morning, of Angus Young joining G&R on stage at Coachella over the weekend, to play “Whole Lotta Rosie.”  Axl sounded great.  But he’s a head case.

AC/DC is known for soldiering on under any circumstances.  They show up, they play their asses off, rock your world, and move on to the next town.  They’re professionals.

Guns & Roses history has been littered with inconsistency and unreliability, mostly due to their temperamental lead singer.  If you have tickets to a G&R show, you never know when (or if) it’s going to start.  You’re lucky if it’s only an hour or so late.

I was kind of hoping they’d find some guy in an AC/DC tribute band and give him the gig.  Maybe they could have gotten two… one to do the Bon Scott songs and one to do Brian Johnson's.

…the Fart Barrier?  Last month, I saw this article online, which trumpeted the headline: “Here’s When it’s OK to Start Openly Farting in a Relationship.”

I was probably overly optimistic that it would prove in any way useful, but I couldn’t pass up that kind of click-bait.  Turned out to be a small survey (only 129 responses), which showed a whole myriad of opinions.

Two descriptions are missing: Red 7% wedge at the top- “I will never, ever fart in front of a significant Other.” Purple 8.5% wedge- “Other.”

My answer would probably be to wait to see how my significant other handles it.  I’ve had a variety of scenarios in the past.  One would fart any time she felt the need, to the point where we’d be sitting on the couch and I’d have to say, “Hon, would you please point that thing the other way?  I can feel the lesions forming on my lungs.”

Another basically denied she even had a digestive system of any kind, so any acknowledgement to the contrary was met with a withering stare.  As far as she was concerned, her asshole was there merely for ornamental purposes.  (And no, I don’t mean ME!)

Anyway, I don’t have anything much to say on the subject… I just can’t believe that someone actually put forth the effort into a fart survey.  I think it probably started as a bar argument and blasted out from there.

…the Light City show you saw getting set up when you were showing Kernut around the Harbor?  Right, as we were walking around the Harbor back in late March, we saw the set-up in progress for a big light show extravaganza.  So when the exhibition opened that week, Sitcom Kelly and I had a happy hour and then took a walk down through the exhibits to see what we could see.

The verdict?  Some things were really cool, others were kind of ‘meh.’  I think the bottom line was that there should have been more things to see.  Or maybe we just didn’t go far enough, because it was crowded and kind of cold out.  But here are a couple of the cool things we saw: 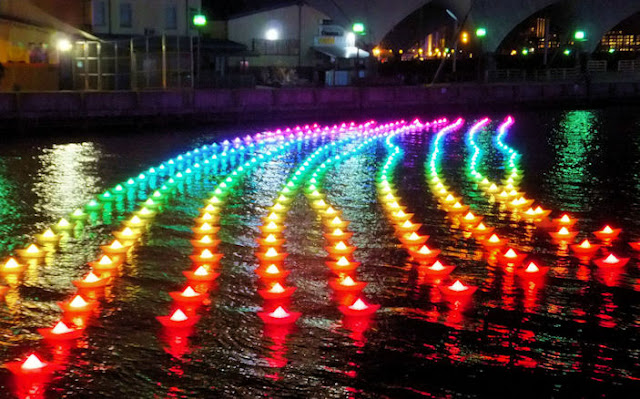 This was my favorite.

We saw these being set up on Saturday and they were all white in the daylight.  At night, they changed colors throughout. 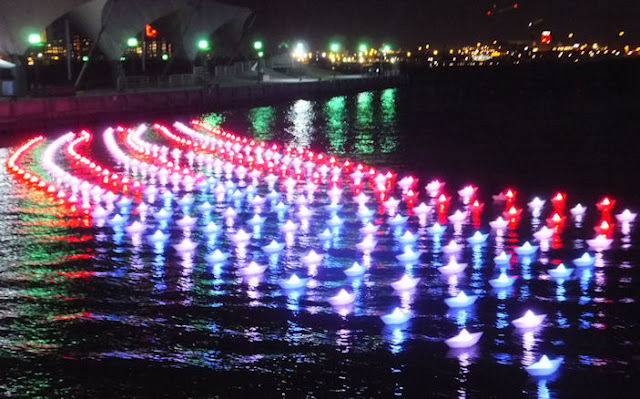 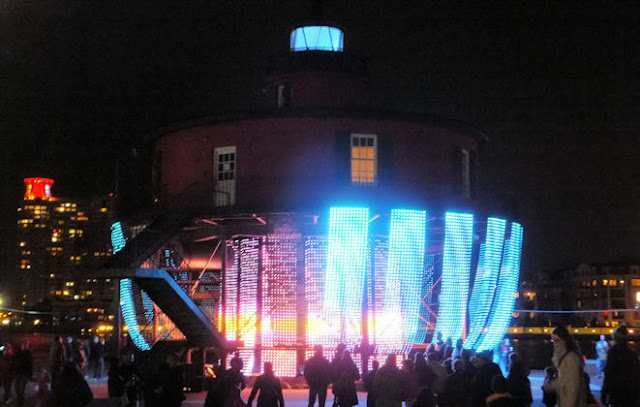 This was the 7-Foot Knoll Lighthouse that Kernut was so keen to see, with sheets of lights hung from it, which functioned like a scoreboard light display. 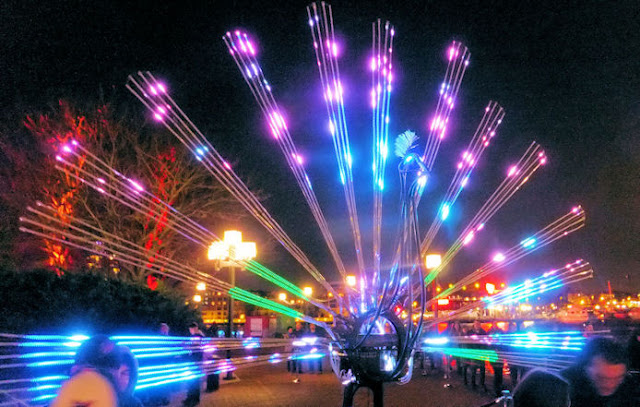 This was Sitcom Kelly’s favorite exhibit.

…the Penguins’ Stanley Cup run?  I’ll spare you the dedicated jersey mojo post this year because there was a game changer. 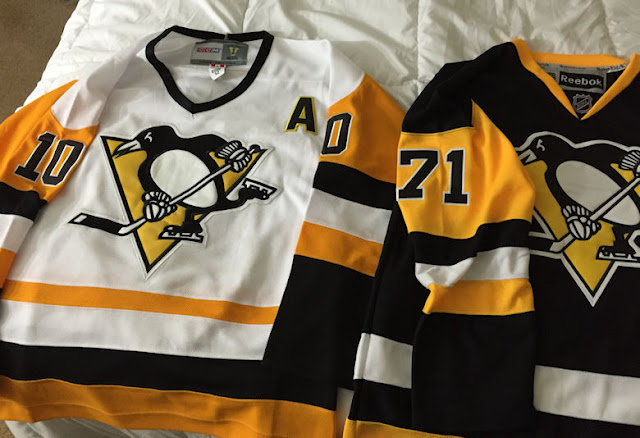 Ever since I got these two jerseys in March, the Penguins went 13-2 when I was wearing them.  The black Malkin was 6-1 and the white Ron Francis was 7-1, with the loss coming in the last game, played with 6 starters missing.  I’m obviously going to work these two jerseys throughout the playoffs, assuming they survive the Rangers series (which is tied 1-1)

But it was a strange season, mojo-wise.  My main “away” jersey, a white Sidney Crosby, was 0-8.  The only reason I kept going back to it was because my only other current white jersey belongs to a player who’s gone.

I also spent 20 games wearing no jersey at all.  Granted, most of those were late-starting, west coast games, but there was a number of games where I just didn’t feel like getting up to change, or I wasn’t at home.  Or I was watching something more compelling on network TV.  Turned out the Pens went 10-10 when I wasn’t wearing a jersey.  Dressing neutrally ensured a neutral result.  Huh.