Hurry Up and Wait

Everyone knows that Comcast has a terrible reputation for customer service; we’ve all seen the horror stories recounted online.  Nevertheless, I decided to get (deeper) into bed with them and naturally, there’s a story.

It all started with my crappy Verizon internet service.  Starting last October, upload and download speed slowed to a crawl.  In fact, it was slower than my old pre-2004 dial-up service.  It would literally take several minutes for a simple Facebook screen to load.  When measured, I was getting about 1 MB or less per minute.

Because I hadn’t changed any settings, I believe they were trying to give me the squeeze.  See, I’ve had the same uncapped internet service since 2004, for $30 per month.  They weren’t making much on me, that’s for sure.  I’ve heard from internet message boards that they’ve been known to throttle service to prod the consumer to call them, where they then are sold a more expensive data package, usually with data caps.

So I figured, rather than fight with Verizon over this, I’d use it as a cost-saving opportunity and let Comcast sell me a cable/internet/phone Triple Play package.  I’d been paying Comcast $155/month for cable and Verizon about $100/month for phone and internet, so if they could come across with something for under $255/month, I’d be in Fat City.

(Yes, I know that’s already a lot for cable, but they get you for everything… HD service, DVR service, HBO, sports package for NFL and NHL channels plus Big Ten Network.  Plus the laundry list of fees and taxes; it adds up.)

So, Friday, April 1st, (I should have known), I called to pull the trigger.  Sales rep quoted me a price of $177.92 for internet/phone/cable, including HBO and Starz.  Said it would go up by $10 after a year.  I didn’t even care about Starz, but what the hell?  I’d be saving about $80 per month.  Unfortunately, they didn’t have any installation openings until the following Friday.  But no worries… I’d just work from home that day.

They would contact Verizon to port over my phone number, but first I had to call them to unfreeze it.  In years prior, I had my phone service “slammed,” wherein a third party changes my phone service to their own, on my behalf… without my permission.  So I had Verizon freeze my account so I’d have to call personally to approve any changes.

The next evening, someone from Comcast called me to see if I’d removed the freeze yet.  I hadn’t.  I told them I would on Monday.

There was another message on my machine when I came home from work on Monday, asking if I’d made the call.  So I made the call and then called Comcast back, at the number I was provided for this purpose, to tell them my account was unfrozen.

The next Friday came and I didn’t hear a peep from anyone during my appointed “window,” from 10:00 to 12:00.  About 1:00, I called in and learned they had cancelled the installation… without bothering to tell me.  They couldn’t even tell me why it was cancelled.  But they said they could get a guy out the next day, on Saturday.  The rep was very nice about it all.

The installer came out at the specified time and got me all hooked up.  He had to do run some cable because it comes into my apartment at the opposite side of the main room from the computer.  The cable would have to cross my sliding glass doors and my front door, so he stapled it up over the doorways, running it up along the ceiling rather than down by the baseboards.  (I made sure they brought white cable.)  I wish he would have tucked it in a little better, though. 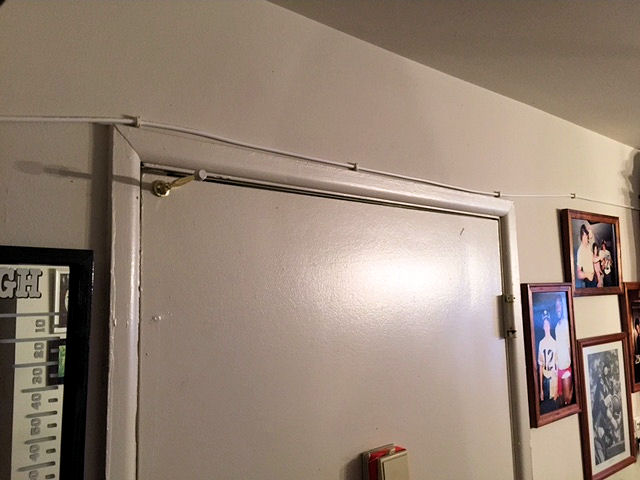 Everything worked when he left.  TV was up, I had a new remote, internet service was crisp and fast, and my phone worked, albeit with a temporary phone number until they could port over my original phone number.

Unfortunately, this arrangement remained long after my number original number should have been active.  I then spent the next two weeks calling Comcast to ask them to fix it.  All the while they were very nice and quite polite.  And each time, I was given a date 2-3 days in the future when everything would work as advertised.

Finally, three weeks after installation, my phones were in working order.  Well, except for the one in the bedroom.  They never mentioned that the wall jacks would no longer work.  Had to figure that one out on my own.

In order to keep a phone in the bedroom, I’d have to get a new phone set.  I didn’t mind that because one of my wireless handsets was getting wonky and I really didn’t like that landline phone.  It had belonged to Temporary Girlfriend and much like her, it was clunky, inefficient and didn’t work out as advertised.

I found the problem right away.  They were billing me for two full bundles; one with Starz and one with HBO.  Plus, they had me down for a pro-rated amount that almost matched what I was already paying just for the cable.

So, I had to call Comcast again, this time from work.  I talked with a very nice rep, who agreed that I had been double billed and incorrectly assessed my pro-rated amount.  She gave me a new figure, which I asked to have emailed to me.  I’m certain that when I pay this new amount, my next bill will contain an “overdue” portion, with late fees.  I wanted proof of my new amount.

She also wondered why my original pricing was only for 1 year.  She said they didn’t even HAVE a Triple Play package that featured both HBO and Starz.  I said I really didn’t care about the Starz; that was what the first rep volunteered.  She also said it would go up by $60 after a year and not $10.  Both reps told me that when the time comes, to call back and arrange a new package to avoid the upcharge.

She ended up comping me not only Starz but Showtime as well.  (I still have to check and see if I’m actually getting it.)  All told, I should be looking at a monthly bill of around $190, which will be a $60/month savings if her quote is actually true.

See, I have to wonder about that because when I finally did get that email, it said my bill was $10 higher than the rep quoted me.  And even after I paid the bill, my new Comcast app still shows a bill for $427.

When I got home from work that night, I went to watch something I’d DVRd over vacation and what do I find?  DVR service was not working.

So I had to call fucking Comcast AGAIN.  I think that’s how I’m going to enter their number into my new phone directory: Fucking Comcast.

By now I know all the recorded prompts…

“We have an address associated with this phone number, is it…”

UFC 130 is this Saturday. Do you want information on…”

I talked to another very helpful representative and it seemed when they updated my package, they hadn’t included DVR service.  So there was the extra $10.  He got me back in the game, though.  For now.

I know Comcast is cognizant of their reputation for lousy customer service so they try to be extra polite.  But that’s not their problem.  From my experience, it’s not the attitude of their reps but a total inability to follow through on what they say they’re going to do.  Besides all the issues I just told you about, I was promised an email describing my situation during each conversation I had with them.  The only email I ever got, ever, was that last one with my adjusted bill.

And each time they promised an email, they’d ask for an address and I’d give them my new Comcast address, which they’d just set up.  Every time.  Where did this information go, a black hole?  The last guy even started out by saying, “I see we don’t have an email address for you.”

I wanted to pimp-slap him right through the phone line.

Anyway, I assumed knew what I was getting into with these guys, but I obviously underestimated that amount of follow up I’d need to get this thing going correctly.  In the end, you just have to be more stubborn than they are.  I don’t think I’m going to change anything again until I’m retired.  Then I’ll have nothing better to do than fight with the cable company.

Epilogue
Last Saturday, I thought I had one more atrocity to report… When I was about half-done charging up my new cordless phones, I saw the readout said “No line,” and when I checked, I didn’t have a dial tone.  Thinking I’d done something wrong, I looked at the instructions and I saw a line that said, “If you subscribe to telephone service from a cable company or a VoIP service provider, contact your cable/VoIP service provider for more information.”

But then I noticed that my internet was down and the cable was out too.  I figured they either bombed out my whole account or there was an area-wide service issue.  After calling in, I heard a recording saying it was the latter.  Whew.

That’s when they recommended getting their phone app, so I could track the expected repair time.  It was pretty nifty, I’ll give them that.  And it also has your current charges, so that’s how I know how much they think my next bill will be. 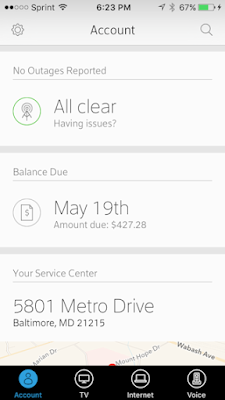 But has anyone else ever been relieved to hear there was a complete cable/internet/phone outage in their area?  Service ended up coming back after another couple of hours.  No harm done.

And thankfully, no more calls to Comcast.  At least until I get that Balance Due notice for that $427…

Email ThisBlogThis!Share to TwitterShare to FacebookShare to Pinterest
Labels: Baltimore Bluz, Bluz LIfe, Morons on Parade, Things That Piss Me Off, TV Bluz