Last week the CDC issued a 17-page report on how to “reopen” the country, which the Trump Administration immediately shit-canned, saying it “hadn’t been vetted yet.”

What they really mean is that they hadn’t stripped out the parts they didn’t like or that made them look bad. The Republican leadership only wants one thing: for the peons to get back to work so CEOs don’t have to sacrifice another quarter to COVID-19.

In a rational world, the CDC would be the ones doing the vetting, not the politicians. The CDC has the health of the nation in mind. The politicians just want the money to start flowing upwards again.

I think the knee-jerk resistance to wearing masks from the Red States is that the primary benefit is for other people and not the wearer. They're kind of like turn signals, that way. Using a turn signal doesn’t do the driver any good, it’s all for the people around him. Hence, the turn signal is an often neglected piece of equipment.

People who think COVID-19 is a hoax or just another ordinary bug don’t care about spreading it to anyone else. And the mask is an irritating and a hassle, so why bother? Empathy is a foreign concept and you know what they think about anything labeled as “foreign.”

It’s entertaining to watch The Rona creeping steadily into Trump’s inner circle. I saw over the weekend that Pence’s spokesperson and an Ivanka aide both tested positive for COVID-19. This prompted Trump to blabber something even dumber than usual:

“Katie, she tested very good for a long period of time, then all of a sudden today she tested positive.”  The positive test showed “why the whole concept of tests isn’t necessarily great… The tests are perfect, but something can happen between a test where it’s good and then something happens and all of the sudden… ”

Maybe someone should explain to the stable genius that the tests aren’t a preventative. If she didn’t take the test, she’d still have the virus. But because she DID get tested so frequently, like the rest of the Administration, they can reduce the number of people she exposes to the virus, so MORE of his enablers don’t get sick.

If he really thinks testing is such a bad idea, I’m all for having his administration stop internal testing. Just let their rugged individualism duke it out with the coronavirus.

I’m particularly surprised the Katie (Mrs. Steven) Miller caught the virus. I figured that being married to him, she must already be dead inside.

Red State governors are learning quickly from their bronzed idol, Trump, and his comrade in arms, Putin. Now they’re all about information control. Florida is reclassifying COVID deaths as other things.

Missouri has only tested 1000 people. No testing, no reporting of high numbers. That doesn’t address the problem, but it makes it look better.

Georgia’s reported figures add up to a 25% hospitalization rate, which means either they have a record-shattering super-bug on their hands or they’re under-reporting COVID cases.

Arizona is using HIPAA to avoid disclosing COVID-19 numbers from nursing homes and jails. (And if there is coronavirus in Arizona, doesn’t that eliminate hot temperatures and direct sunlight as a preventative?)

And when news outlets report on this disinformation? Well they’re just drumming up fake news, aren’t they? We’ve been getting primed for that response for years now. Only now their dishonesty is killing us. (Which they don’t care about, not as long as the cash registers start ringing again.)

We’re on our own out here. I don’t think we’ll ever see an effective Coronavirus Relief Bill passed. The previous ones were nothing but cash grabs for the rich and Band-Aids for the rest of us. The $1200 gimmick covered one month. What happens after that? (We go back to work, say Republicans, virus be damned. And don’t even think about suing for lack of virus protection, they’re already making sure that can’t happen.)

The Small Business bailout money was sucked up by much larger corporations than it was meant for, probably because they let the banks dole it out. Banks always give the first cuts to their best clients… the rich ones.

They seem to pick and choose which hospitals are going to get any help… usually ones in Red States or who have administrators who went to school with someone in the Administration.

The only rational solution I’ve heard about is doing what the other civilized countries are doing: sending regular disbursements of cash to all citizens. I don’t know if it’s bi-weekly or monthly but their people are getting regular checks, which they can then spend on food, goods, and bills. Everyone gets paid.

I heard Democrats were pushing a $2000 per month benefit. This would be a huge help to most Americans, however, the Republicans will never let that happen. Giving out money (to the masses) goes against everything they believe in. They’re much more comfortable with giving money to the richest, under the illusion it will filter down to the rest of us. (And if it doesn’t, well, they don’t really care. They made an effort right?)

They will holler about the precedent and about incenting people not to work and everything else they can throw at the wall, because way down deep, they don’t give a fig if the lower and middle-class sink or swim, as long as the stock market is up. Every dollar sent to the non-rich is a dollar they could have had first.

What they don’t understand is that regardless of whether they throw open the doors to business, they can’t make people start shopping like the old days again. Not until they feel safe. There are no clever speeches or turns of phrase that’s going to get my ass into a crowded store or restaurant or stadium again, until we have a vaccine and a treatment for this mess.

This is one of the most informative articles I’ve read in ages. I picked it up from a friend on Facebook. It’s about how the coronavirus gets transmitted, in detailed terms, highlighting what behaviors and actions are relatively safe, and which are not. (Key point, it’s all about the amount of time spent with someone who’s contaminated and your proximity.) Everyone in America needs to read this post. Seriously.

And then there’s this Twitter thread blog post that demonstrates why you don’t want to go anywhere near this disease. When it’s serious, the effects are devastating. Original tweets are from a woman whose father is an ICU doc.

And speaking of Facebook, let’s end with a little debunkery. 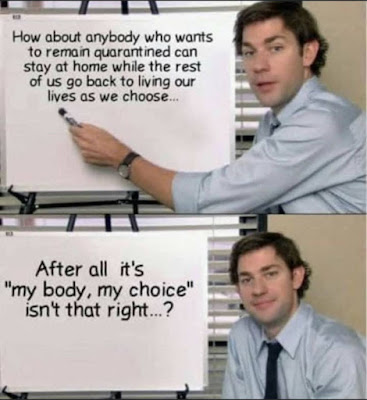 The problem with this analogy, with a gratuitous helping of trying to throw liberal words in our own faces) is that when others go “back to living our lives as we see fit,” they’re putting anyone they encounter at risk. You know, it’s the turn signal problem again. “I get to do what I want and if you get hurt, inconvenienced, or killed? Not my problem.” “My Body” in these circumstances is potentially harming hundreds or thousands of others (because the infected then beget further infections.

In the latter case, “My Body” is limited to the woman seeking an abortion a bean-sized lump of cells. No collateral damage. 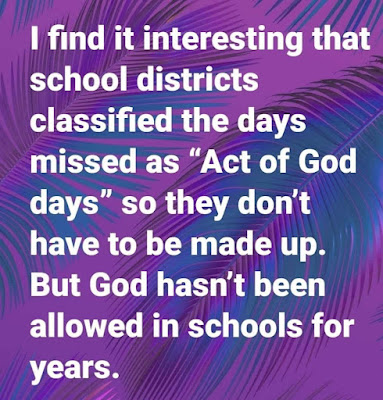 This is simply inaccurate. God is certainly “allowed in schools,” kids can pray whenever they want or dare. “He” just can’t be forced on students by the state, school administration, or anyone else. But that never stopped the religious from playing the victim and whining about how they’re not allowed to shoehorn their religion into other peoples’ lives. Many of whom prefer to maintain an educated point of view, rather than one based on ancient superstitions, happy thoughts, magic, and an invisible man who loves you but damns you to eternal torment if you do not please Him.

***
It was with great sadness I read of the passing of Little Richard, who along with Chuck Berry, practically invented rock n’ roll. Everyone knows the songs, but the one I always think of is not one of the obvious.

Back in the 70s, when ownership of BTO’s Greatest Hits was practically mandatory, there was a track on that album called, “Take It Like a Man.” It’s a basic rock song but with some jamming piano throughout. As a young boy, I always pored over album cover minutiae, and with this one, I saw that they credited Little Richard with piano on that track. In fact, towards the end, they go out with an extended piano solo, with the singer exclaiming, “Play it, Richard!”

As a boy, I figured, if he’s good enough for BTO, he must be all right.

Rest in peace, Richard. You earned it. Everyone you hear bangin’ the keys in recording studios, arenas, smoky bars, dives, and family rooms owes you a debt of gratitude for leading the way.