Apparently Double Standards are the Only Standards They Have

“You mean people pay politicians in order to have access to them?  Holy fuck, when did this start?

I’d say right around the time the first presidential campaign fund was announced.

I can’t believe this Clinton Foundation “scandal” is a real thing.  I’ll be the first to admit that it looks pretty shady, but that’s just because it’s pulling the veil off of the entire facade.  Money has always equated with access in politics and thanks to the Republican-appointed Supreme Court justices and the Citizens United decision, the amount of money is limitless.

The Koch brothers own the US Senate lock, stock, and barrel, and Senate Majority Leader McConnell will do whatever they want him to do… like deny a hearing to a Supreme Court nominee, indefinitely.  And now they want to complain about the Clinton Foundation?  An actual, certifiable charity, whose business deeds and dealings are a matter of public record?

What, exactly, has Donald Trump ever done for anyone who doesn’t have the last name of “Trump?”  Nada, that’s what.  For all the charity he touts, there is precious little evidence to back it up.  In fact, even in his most public charitable forum, The Celebrity Apprentice, whenever he told a contestant  that he's giving “X” thousand bucks out of his own pocket to their charity, it was NBC’s production company that actually sent the check.

When he put on that big charity show to benefit US veterans, he never provided a single dime until he was hounded into doing so by the press, after they started asking questions about where the money went.  (You know, because that’s what journalists do.)

Unfortunately for reasonable people, Fox “News” viewers lap this Clinton stuff up without even a second thought.  Or a second’s thought.  But that’s what they’re used to getting from Fox… one big, hairy, double standard after another.  No wonder they don’t notice; it’s the go-to ploy.  The GOP accuses Democrats of doing everything that they, themselves do, without as much as a whiff of embarrassment.

Like presidential vacation time.  Have you heard it again this week?  They bring it up every time President Obama goes on vacation, despite the (verifiable) fact that he’s taken far less vacation time than his Republican predecessors. 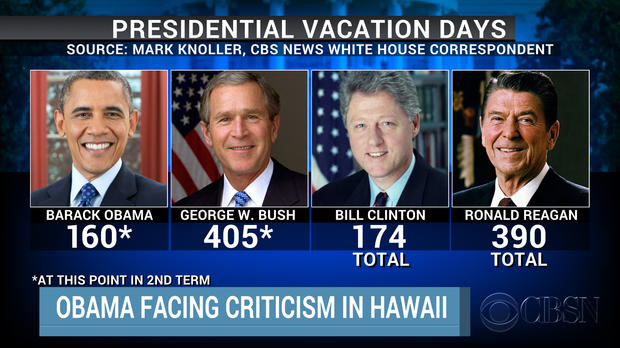 This is from December 2014.  I apologize for not finding a more recent graphic.

As this article describes, there always seems to be something that comes up when Obama is on vacation, for which they accuse him of shirking his responsibilities.  But the thing is, it’s a complicated world.  There is ALWAYS a crisis happening somewhere.  If any president waited for a time when there’s nothing going on, he’d have to work four (or eight) years straight.

Same with speaking fees.  Every successful politician cleans up after serving, via speaking fees to friendly organizations.  I’m not saying that’s a good thing, but it is what it is.  But they make a big deal out of Hillary’s speaking fees because… well, because they can and no one notices that she’s the only one being held to that standard.

Republicans love to talk about big-money Democratic donor George Soros, oblivious to the fact that the GOP has dozens, if not hundreds of Soroses.  The reason I’m not nervous about Soros is even though he’s donating to a group that will probably raise his taxes and cost him money, he does so anyway to benefit the greater good of the country.

The rest of these rich ratfucks are simply trying to protect their nut, and to hell with anyone else. 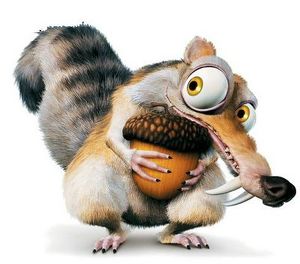 How about gerrymandering?  Here in Maryland, the local Republicans have filed suit to have the extremely Democrat-favorable congressional boundaries redrawn, because gerrymandering is… bad?  I guess?  When it’s done by Democrats, anyway.

Maryland is one of the few badly gerrymandered states that benefit Democrats.  There are hundreds of contorted Republican districts across the country, but you won’t hear the GOP complain about those.  Only the Democratic ones, because it’s only a travesty when a Democrat does it.

If you ask me, they can completely redraw the Maryland districts into nice even little squares… JUST AS SOON as they do it everywhere else.  But Republicans hate it when they get beat at their own game.

Remember how long Trump clung to all that Birther bullshit?  He charged and accused and intimated, and even when faced with irrefutable evidence, far more than any other candidate has ever been asked to provide, he still refused to admit he was wrong.  And forget about having the decency to apologize.

Now he’s demanding all records from the Clinton Foundation be turned over while refusing to provide his tax records.  (And lying about why he won’t.)  He’s demanding Hillary open up her medical records, while he provides nothing but a sham doctor’s note that’s already been discredited.  She’s already provided the standard level of a presidential candidate’s medical disclosure, which he has not come close to meeting.  But she’s the one hiding something, right?

The big talking point now is about how Hillary is dishonest and untrustworthy.  Seriously.

Their candidate was racking up between 75-95% “lie” determinations on Politifact, compared to what, 25% for Clinton?  Over and over again, research is showing that Donald Trump wouldn’t know the truth if he built a shitty casino on top of it.  And they’re crying “Liar.” 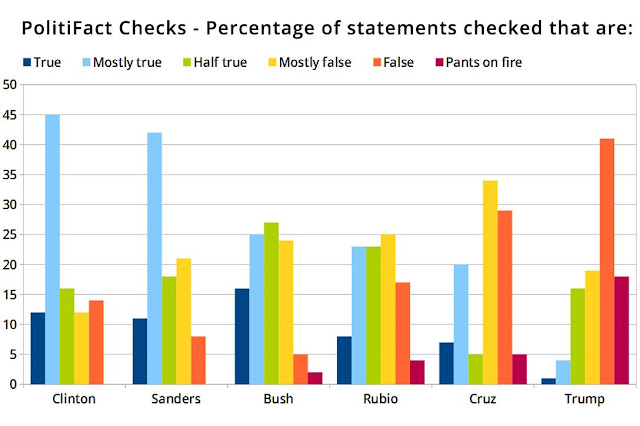 See, they’re not trying to be decent human beings, they’re trying to win elections.  And their research shows that if you repeat a lie often enough, it becomes indistinguishable from the truth to those that want to believe it.  That’s the reason Trump repeats “Crooked Hillary” every single time he refers to her.  To him, it’s just branding.  He knows most people are swayed by emotion and not facts.

The temptation would be to lie right back about him.  Of course, that’s unnecessary.  All the Dems have to do is tell the truth.

When the subject is Donald Trump, the truth is indeed stranger than fiction and far more disturbing.
Posted by bluzdude at 8:05 PM