I don’t have enough to say on any one of these topics, today, so let’s just do a drive-by and see where we end up…

***
I’m having a hard time believing that Trump and his surrogates are trying to make an election issue out of Bill Clinton’s marital infidelity.  I mean the candidate, himself, is on his third wife after having cheated on his first two.  Giuliani and Gingrich?  Both of them are on their third wives as well, with Gingrich being a big enough piece of shit that he had papers served to his wife while she was laid up in the hospital, fighting cancer.

And since when do you hold the wife responsible, by default, for the sins of the husband?  It’s Loony Toons out there.  Believe me, if she’d dumped him, instead of sticking around, they’d be criticizing her for that too.

Just goes to show there is no lengths the GOP won’t go to call the kettle black.

***
I am singularly unimpressed by all the “patriots” who are still fuming about athletes kneeling down during the National Anthem.

I’ll tell you what; standing during the Anthem doesn’t make you a patriot.  And neither do putting ribbon magnets on your car or posting Up With Police/Up With Military memes every half an hour.  That's the easy stuff, which requires nothing of consequence from you.

Want to show patriotism?  Support the First Amendment.  Welcome immigrants to this country, which is a nation founded by people whose ancestors weren’t born here.  Stand up to people trying to subvert the First Amendment by substituting the Bible (or any other “holy” book) for the Constitution.

THEN I will be impressed by your patriotism.

***
I’m glad the edges are starting to get chipped away surrounding Trump’s tax returns.  So now we know, thanks to the New York Times, that Trump likely hasn’t paid a dime in taxes because of an almost billion-dollar loss he accrued in the mid-90s.

Conservatives are already washing over this issue because there was, in fact, no laws broken and he was following a legal tax strategy.

That's true, but it's not really the point.  He’s made such a big issue of how good a businessman he is and how wealthy he’s become.  How does that square with losing so much in one year that you never earned enough to turn that red ink to black?  Is that his solution for the country too?  Just default on your debts and pretend you’re solvent again?

At this point, with this “known” out there, we can determine one of two things.  If he promptly releases his taxes, then this was the big enchilada.  But if he doesn’t, that means there’s something else in there that’s so repugnant, he’d rather take this PR beating, (which he can stonewall, deny, evade and transfer blame) than let his tax return confirm our worst doubts about him. 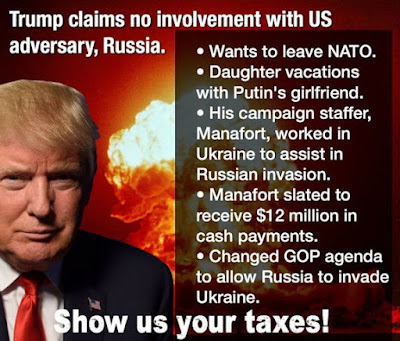 I think Hillary got him pretty good about it during the debate.  She pulled the Fox “News” gambit, in which all she did was ask questions and said “maybe this, or maybe that…” (which are meant to lead us to the obvious conclusions, while giving the ability to say, “I don’t know, I was only asking…”)

***
Speaking of the debate, can someone tell my why the GOP is so afraid of fact checking?  Never mind answering, I’ll tell you why.  It’s because their entire campaign (especially this year) is based on complete bullshit.  They want to be able to make up anything they wish and spin it as true, regardless of the dark, smelly cavern from which they pulled it.

A competent fact-checking moderator would keep both participants in check, but that’s what they’re worried about.  They’re trying to brand Hillary as the liar when their own candidate would embarrass Pinocchio.  If lies were tallied, the public would keep score, wouldn’t they?  And then their house of cards might come tumbling down.

Oh, who am I kidding?  They’d just call it proof of a biased media and claim it was fixed.  And their supporters would believe every word of it.

***
The biggest problem with having a headache is that there are no outward symptoms.  Best you can do to garner sympathy is make a few distressed expressions and whimper.

***
Have you seen how Congress has now over-ridden their first Obama veto, and now have buyer’s remorse?  Even funnier, they’re trying to blame it on Obama.  (Obviously, because that’s their default reaction to anything that happens in Washington (or the rest of the country, or the world).

The bill was the infamous 911 bill, that allows victims to sue the Saudi government for damages.  The President vetoed the bill because of the damage it could cause to Americans abroad, in general, and servicemen abroad, in particular.

But Congress, from both parties, in their desperation not to appear to kowtow to Muslims, Arabs, or filthy foreigners during an election year, over-rode the veto.  Now Mitch McConnell just blamed Obama for not explaining the bill (which Congress produced) and his objections more clearly. (I presume in order to understand the issue, Obama would have to use 4th-grade vocabulary, like Trump does.) 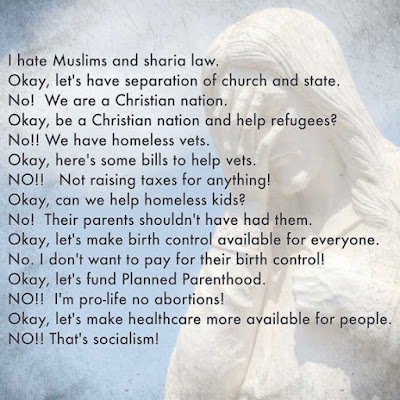 So remember the next time a Senator or Congressman makes a statement about how those protesting athletes should be more patriotic; they voted to allow legal harm to come to our current soldiers and public servants abroad, rather than damage their chances for re-election.  Because they’re so very patriotic…

***
And speaking of that 4th-grade vocabulary, a lot of people assume that Trump speaks that way because that’s the limit of his education.  I believe they’re incorrect.

Trump has a perfectly serviceable vocabulary; he just knows better than to use it on those whose support he’s trying to gain.  He’s dumbing down his speeches so that his under-educated followers will understand.  He’s aware that there are more uneducated than educated, and they are more easily swayed by simple solutions to big problems, described in simple language.  (It’s no accident that college-educated citizens are overwhelmingly against Trump and those with a high school education or less, support him.*)

*The exception being all the rich, corporate fucks who are just trying to keep their massive advantages, like the ability to write off billion-dollar losses. 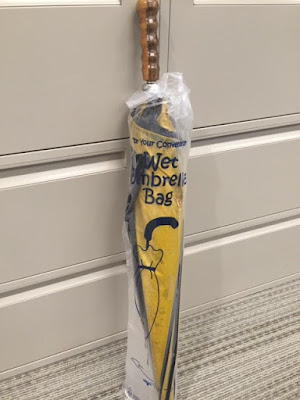 I put this on Facebook last week and the best comment said, “If it leaks, do you end up with a bunch of little drink umbrellas?”
Posted by bluzdude at 3:46 PM