Last weekend was the highlight of our football season so far, with our family’s trip to South Florida for the Steelers/Dolphins game.  We used to take these destination football/family reunion trips all the time, but we haven’t done it since 2010.

My mom and dad drove out from the panhandle, my sister and her husband came in from Cincinnati, and I flew down with my brother and his family.  We booked rooms at the Ft Lauderdale Hilton Resort and man, was that ever nice.  My brother and family had adjoining rooms with the parents which functioned like a huge suite.  That was where we hung out in between eating events.

I had a King Studio room on the 23rd floor and just loved it. 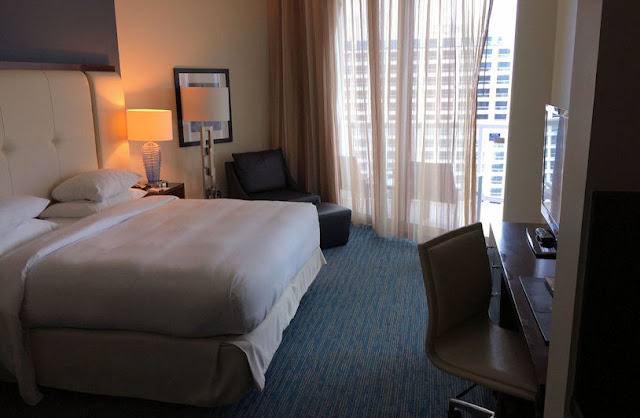 The balcony wrapped around the corner.

I mean, look at this view from my balcony! 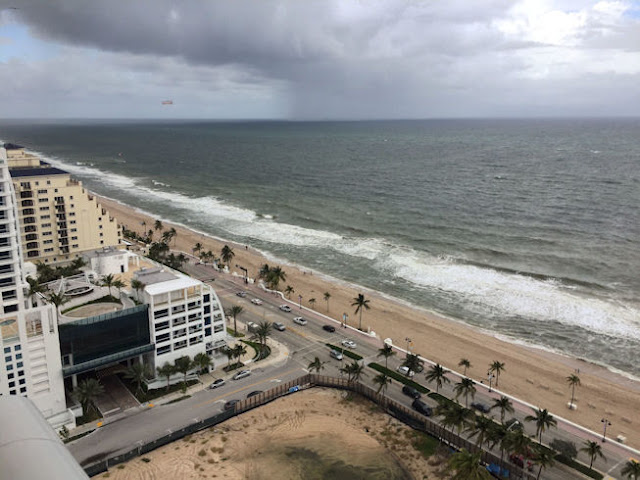 The place was oddly outfitted, though. 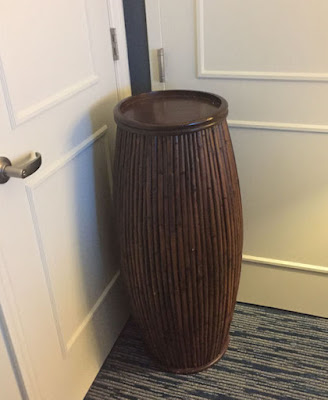 I suppose this is here in case I have a sudden urge to perform a bongo solo.

Once we got ourselves situated and carried up to the room the crates of booze that Dad brought, we had time to mix a few drinks, watch some college football and shoot the breeze.

For dinner, we went downstairs to one of those fancy schmancy “small plates and sushi” restaurants.  Might have been a mistake on our part.  We’re more of a Steakhouse/Italian/Chinese/Sandwich the Size of your Head kind of group.

I did see one interesting menu item… 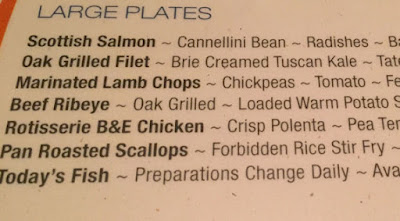 I wanted to try it but I’m pretty sure the waiter would refuse to serve it to me.  I mean, I could see the whole conversation:

Bluz: I’d like the scallops with the Forbidden Stir Fry Rice.

Waiter: [furtively] It is forbidden.

Bluz: Then why is it on the menu?

Waiter: Ask not a question for which you are not prepared for the answer.

Bluz: Yinz got a big fish sammich n’at? And maybe a Klondike?

We ended up mixing and matching enough small plates that everyone got their fill.  Afterward, we returned to home base for more drinks and an evening of Ohio State football.  Buckeyes beat Wisconsin in overtime, which put a nice cap on the night. 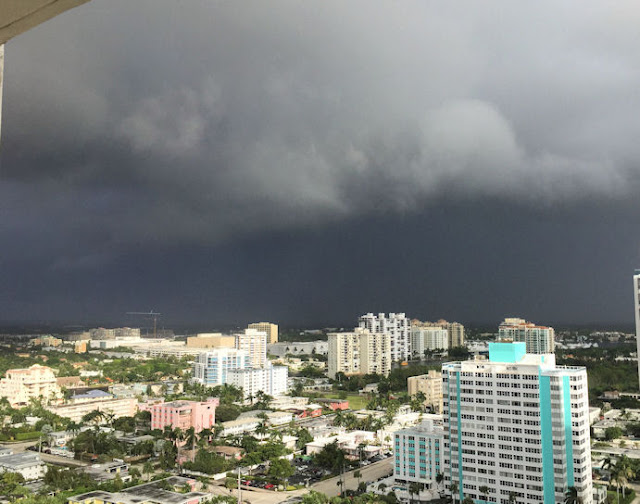 There’s a big one brewing…

I hoped it was going to be more of a coastal storm than anything further inland, where the stadium was.

After the breakfast buffet, which didn’t make a bid deal about the size of the plates, we loaded up the car for the tailgate party.  My brother-in-law, the Dolphins fan, and I carried the beer cooler and headed for the elevator.  As we were going down the hall, he said something like, “Isn’t this a shining example of what happens when two opposing teams come together in the spirit of cooperation?”

Then we got to the elevator lobby. 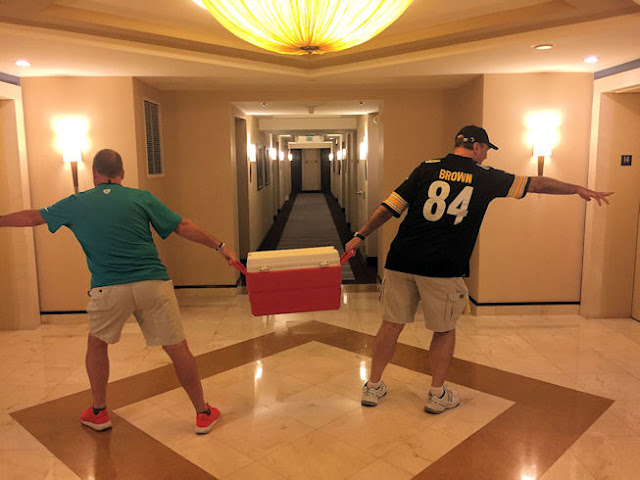 And here we have today’s metaphor for the current political atmosphere.

After eventually summoning an elevator, we took off for what is now named Hard Rock Stadium. 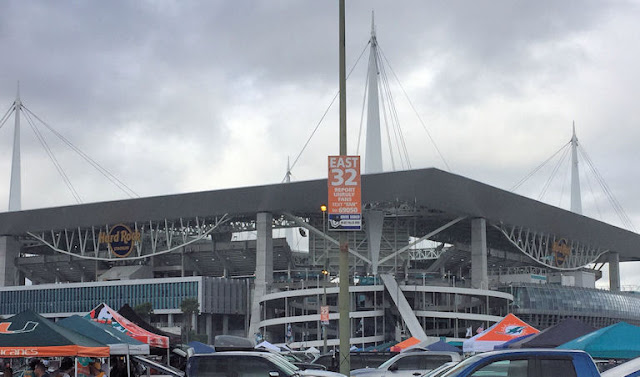 I swear, this is my fourth Dolphins game in Miami and every time there’s been a new name on the facade.

Anticipating that the Dolphins would wear their white jerseys (to better cope with playing in the hot sun) I geared up with my black Antonio Brown jersey and classic Terrible Towel. 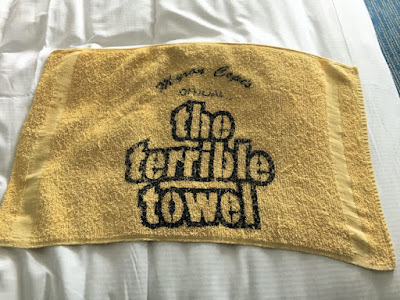 My vintage 1996 Battle Towel.  This one has been with me to every Steelers game since the day I bought it in the Pittsburgh airport.

All things pointed to there being a huge Pittsburgh contingent at the game and we weren’t disappointed. 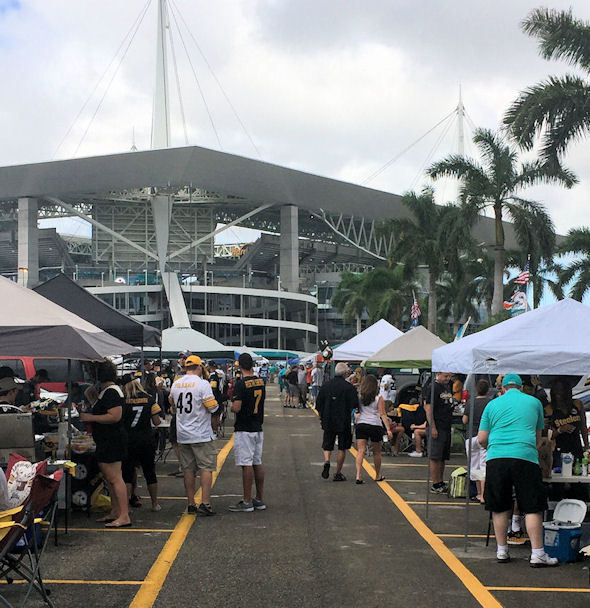 If you didn’t know better, and there weren’t palm trees, you’d think this was a Steelers home game.

But because it was South Florida, it had to rain roughly every 20 minutes. 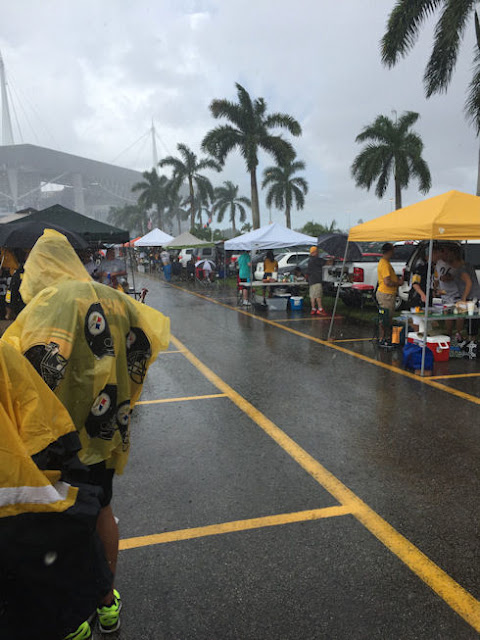 You see all those little portable gazebos?  Those mark the experienced South Florida tailgater.  We had one right beside us; a small group of Dolphins fans.  Luckily, they took pity on us and let us duck under their shelter.

I told them, “If this had been Baltimore, they would have made us stand out in the rain and laughed at our wet black and gold asses.”

Once we went in, we took our seats in the club level in the end zone. 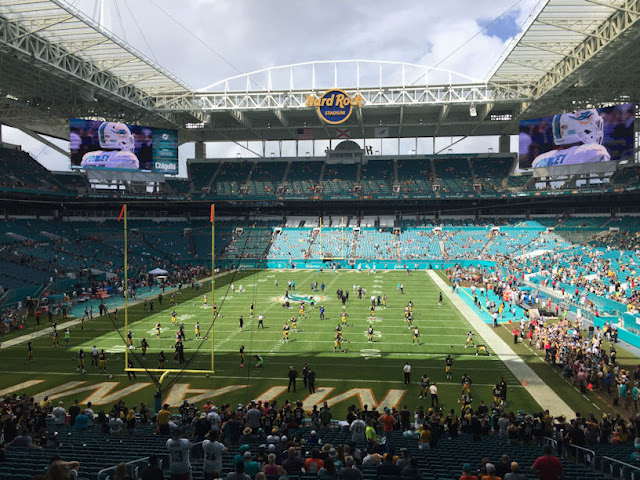 They ought to rethink their logo design, or else everyone will think it’s called “rd Ro” Stadium.

They just put the roof extensions on this season, for which we were grateful.  It kept us nice and cool in the shade.  And it also would have kept us dry, if it had rained again.

Inside the facility was nice too.  In fact, the bartender was so nice, she let my brother buy beers for himself and his two boys. 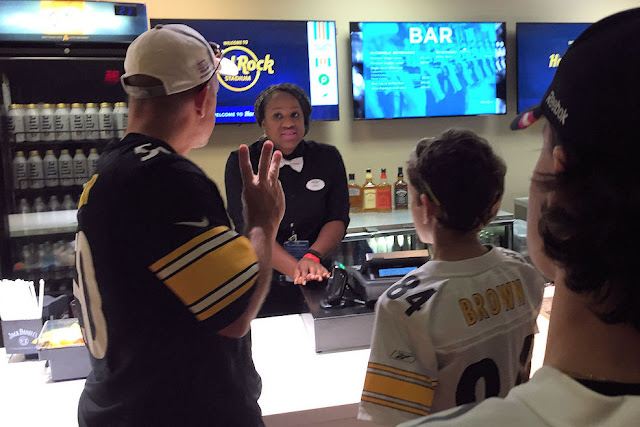 Disclaimer: No underage boys were given beer in the stadium.  It just totally looks that way.

Then onto the game.

The game sucked.  The Steelers got their asses handed to them, but good, despite the valiant efforts of me and my Battle Towel.  It was too bad because the place was crackling with Pittsburgh energy.  When the Steelers scored early, the towels were everywhere and they almost tore the new roof off the place with the roar.

But after that, there was nothing left to roar about.  My brother-in-law got so wound up with excitement, he bought this ridiculous hat. 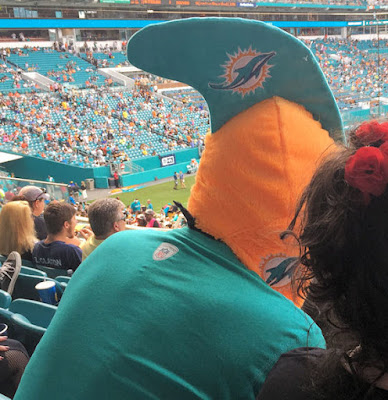 And I got so discombobulated that when we left, I walked off without my camera, which I’d left in the cup holder (for easy access).  All the pictures you see today were shot with my iPhone.  It’s a shame, not only that I have to buy a new camera now, but you’re being deprived of all the incredible action shots I had lovingly composed and framed.  I might have gotten the Nobel Prize for Amateur Sports and Food Photography.

But all told, it was an incredible weekend and we all had a ball.  I highly recommend this particular Hilton, if you’re ever in the area.

Just bring your own plates. 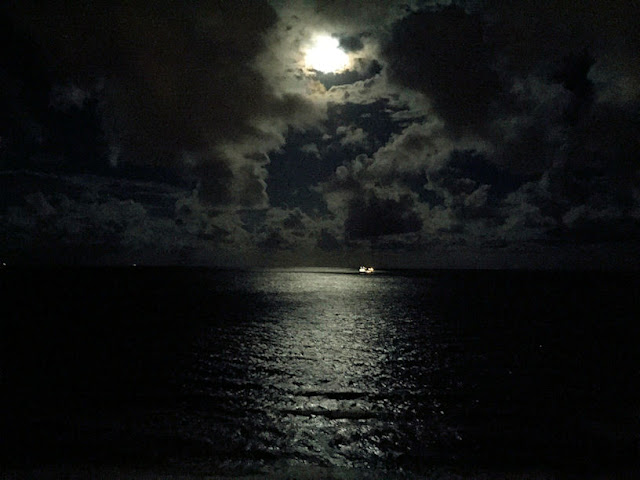 To quote the Denny’s breakfast menu, this is “The Moon over My Hammy.