It’s ironic that the mid-Atlantic is being buffeted by high winds today; the winds of change are definitely emanating from the nation’s capital.

Our new leaders are barely even pretending they intend to serve the country.

Congress has made it plain that they don’t listen to us, they listen to the rich people who pay for their campaigns, and the rich people want the ACA gone so that they get a break on their taxes.  The fact that they ignore the popular support for the ACA and try to hide the ramifications is all the proof you need.

If they cared what the American people thought, they would look at national polling and obey the will of the people.  That didn’t happen, did it?

Of course, they will say, “The American people voted for Trump, who campaigned on eliminating Obamacare.”  And they’re right, to a point.  He did get elected.

But look at the people coming out of the woodwork now, who voted for Trump but don’t want their health care taken away.  Some of these brain surgeons didn’t realize that the ACA WAS Obamacare.  They just believed it when Fox “News” told them Obamacare was bad, because, you know… Obama.  Republicans are nothing if not highly skilled at getting people to vote against their own best interests.

I was heartened to see the vastness of the Women’s protests on Sunday.  Unreal crowds all over the country and the presence in DC dwarfed the showing for the inauguration.

The protests are nice and all; inspiring even, but they won’t mean anything unless people mobilize to take back the House and Senate in 2018.  I think the protests are kind of a feel-good thing and the participants get to feel like they contributed.  At best, I think they demonstrated that they have numbers to be ignored at one’s own peril.

But in order to make any kind of tangible change, those numbers are going to have to manifest themselves through the voting booth.

That’s going to be a long shot both ways.

The House is so effectively gerrymandered; it would take widespread philosophical conversions from Democrat to Republican to convert current GOP districts.

In the Senate, there are far more Democratic seats up for grabs than there are Republican ones so there would have to be a Democratic landslide to change the balance of power there.

I think the best case scenario is for a bunch of those marchers decide to run for congress.  We need competent candidates to represent a liberal or humanist agenda.  Then go out there and convince people, across the district or state, that their ideas are right and their opponents ideas and actions are wrong.  Hang them with their own words and deeds.  In two years, a lot of these congressmen might be ripe for the picking, depending on how far down the toilet the middle class has swirled.

Meanwhile, the Trump Administration, just to avoid getting off on the right foot straight out of the gate, is already lying to us.  Obvious, blatant lies, like the inflated figures regarding attendance at the inauguration.  And they’re blaming the media, (as always) for factually reporting these falsehoods. 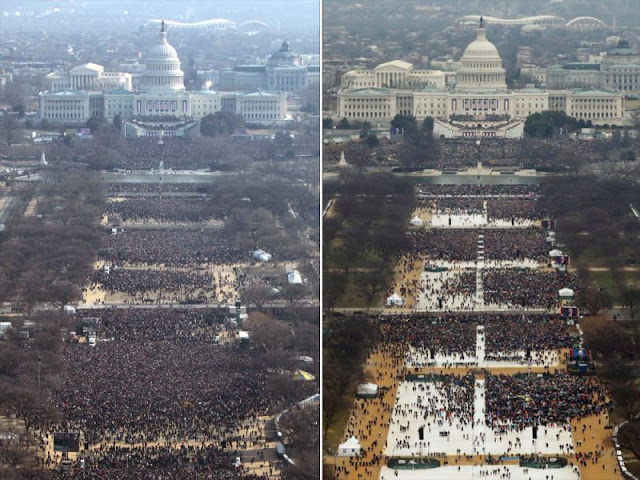 “Seriously!  The shot on the right actually has more people!  Come on, I mean it!” (Source)

Press Secretary Spicer’s point in a nutshell: “Who are you going to believe, me or your lyin’ eyes?”

Have you ever heard President Obama talk about the attendance figures for his inauguration(s), or ANY appearance, for that matter?  Ever hear him talk about ratings?  Any other president?

Of course not.  A president should be above these petty concerns.  But not this one.

This kind of stuff is not normally important, but Trump’s incessant crowing about his popularity and focus on ratings makes it newsworthy.  Obviously, size really does matter to him.

And now his favorite spokesweasel, Kellyanne Conway, defiled the English language, as well as common sense, by claiming the President is entitled to “alternate facts.” 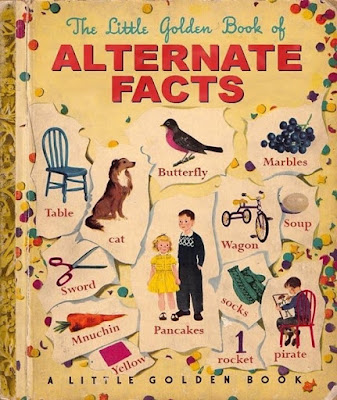 “Alternate facts” are not facts at all; they’re just lies Republicans desperately wish were true.

So look at it.  Look how easy it is for them to lie to us.  They just toss this stuff out there; things that are easily proven false with no more than a cursory review, and expect us to believe them.  And then they blame the media as if it’s their fault for providing actual “non-alternate” facts to prove them wrong.

Did you ever notice that the first thing a despot does upon seizing power is control or neuter the press?  It’s no accident that it’s already started here.  And just like with the rest of the GOP bullshit, they know if they keep repeating it, their sheep will come to believe it.

As I’ve repeated here often, it is the press’s job, their very reason for existence, to ask hard questions to those in power and seek the truth.  (The real truth, not some alternate truth.)  They’re going to have their work cut out for them because with the Republicans in control of both houses of Congress and the executive branch, they’re already putting up walls to keep us from seeing what they’re up to.

In just the last week:

·        They voted to eliminate the Department of Congressional Ethics, so no one will ever be held accountable for their misdeeds.  (Yes, it was reversed, but only after considerable protest.  But why do you think they thought it was a good idea in the first place?)
·        They also threatened the Chair of the Ethics Committee, telling him how he’d better pipe down if he knew what was good for him.  “Ix-nay on the Ethics-ay.”
·        They arranged high profile nomination questioning simultaneously, so to divide the opposition, and enforce strict time limits on questioning, to provide an atmosphere where the nominees could say as little as possible and get out the door without having to actually take a stand or say what they plan to do.
·        They are already tearing out the basic protections afforded by the ACA, without so much as a plan, for how to replace it.  At least, nothing they’ll publicize.

So yes, protests are good… they’re fine… but they don’t change anything without political action.  The only way to achieve what the people are protesting for is to replace the people with whom they disagree on policy.  Because these guys in office now?  They don’t give a rat’s ass what you want.  They answer only to those who put them in office; the wealthy upper-crusters who bankrolled their campaigns, and in effect, bought them lock, stock, and barrel.