That’s what I call my annual vacation during the week after Christmas: Dessert Week.

All year long I go to work like a good boy and take very little time off, compared to the amount I’m given.  By the end of the year, I start burning off vacations days by taking off Fridays or Mondays.  Then that last week off is like having a nice sweet dessert after a long slog through the year.  (Especially 2016, which was pretty much of a shit sandwich.*)

* Other than the Penguins winning the Stanley Cup!

So I’ve been off since 12/23 and it’s been great.  In theory, laying around for a week sounds fun, but I still feel like I have to accomplish something, which then allows me to slack off for the rest of the day.  So here’s what I did all week:

Friday, 12/23
Went to go see the movie “Passengers.”  (OK, sometimes all I accomplish is getting out of the house to see a movie… and make a liquor store run.)  Despite the bad reviews, I liked the movie. Nothing wrong with going to see two of the best looking young actors in Hollywood (Chris Pratt and Jennifer Lawrence) put on a sci-fi/action love story.  I think the bad reviews are based on the reviewers wanting the movie to be something else.

I also started reading the new Bruce Springsteen autobiography, which I got for my birthday.  (Thanks, Mom!)  Good stuff!

Saturday, 12/24
Went to Jilly’s, my local sports bar, to watch the pre-Christmas slate of NFL games.  What do you want from me; it’s the weekend.

Sunday, 12/25 Christmas Day
Went to my brother’s house for Christmas dinner, gift exchange, and the Steelers/Ratbirds game.  (Not necessarily in that order.)

Monday, 12/26
I recently gave my bedroom TV to a friend who needed one, (and I wanted to upgrade), so my big project for the day was to replace it.  I found a deal on a Samsung 40” smart TV at BJ’s Wholesale and figured I’d best take advantage while my membership still stands.  (I didn’t use it much this year so I’ll probably let it lapse.) 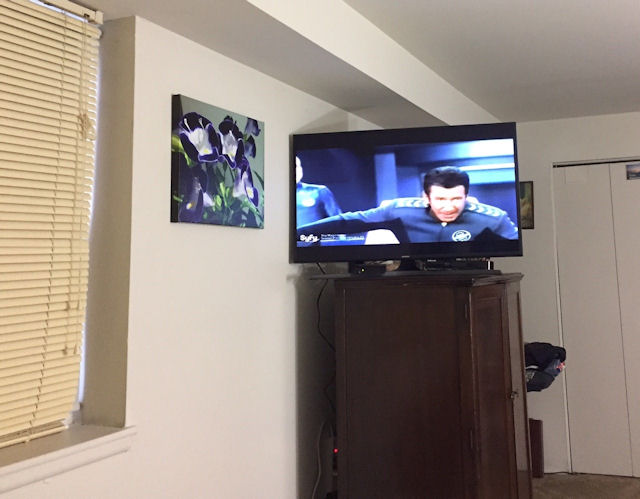 New TV in place.  And I can still see it from the can, via my specially mounted mirror.

I also got some lunch and went grocery shopping at the nearby Wegman’s, the existence of which is the primary reason I’ll let my BJ’s membership elapse.  After bring home my haul, I went out to happy hour at Jilly’s, mostly to be seen with my new Steelers shirt and huge victory grin.  (I prefer to gloat without really gloating.  I know the Steelers beat the Ratbirds, and they know it, so I don’t really need to say anything.  Usually, they just see me looking happy and go, “God dammit…”)

Tuesday, 12/27
This was my only total “veg” day.  Didn’t get dressed, didn’t even shower.  But I did bang out the previous blog post.  Watched the Penguins that night and continued to read my Bruce book during commercials and intermissions. That’s my version of multi-tasking.

Wednesday, 12/28
To me, this was the big day of the week, because my nephew Daniel was coming to visit me.  Now that he has his driver’s license, AND is off from school and work, AND doesn’t have some sporting event to participate in, I figured this was the week to do something.  I asked him back in October if he could set a day aside during break, to come visit.  He was agreeable.  And then over Christmas, I said, “Pick a day and time.”

He chose Wednesday at 2 and I told him I’d hold him to it.

The reason I wanted him to come up is so we could talk music.  I referred to it as taking him to music school.  We talk music all the time when I visit, but this was a chance for me to play him some stuff and get instant feedback.

But music wasn’t the only subject I wanted to get into… I don’t think I’ve mentioned it here but I’m writing what I call, “The Bachelor’s Guide to Living.”  It’s an idea the two of us have kicked around for years.  I’d been giving him all my best Uncle Advice about anything from living alone to how to fold a game jersey, and realized it would be a good idea to write it all down.

A year or so ago, I started putting ideas down on the notepad app in my iPhone.  Then we’d be talking and I’d say something and we’d be like, “That’s gotta go in the book.”

Earlier this year, I transcribed all my notes into something coherent, so now I have about 36 pages on Word.  OK, maybe not so much a book, as a pamphlet.

Anyway, the point is that I could show him some of the idea and systems I’ve created (and written about) first hand.  I believe it’s much better to show than tell.  Doing both together is optimal.

So just within the realm of showing him how to make pork chops, I could demonstrate how to arrange a kitchen so that everything is where you actually use it, how to try to only touch something once (rather than setting it aside and have to come back to it later), how to keep a short reference list of common seasoning combinations and cooking times, what he could buy for low-effort side dishes, as well as actually prepare and cook the pork chops.  (They were to die for, by the way.  I apologize for eating them before I thought to take pictures.

The day went amazingly.  He came at 2:00 and left at 7:00, well fed and all coached up.  It was the highlight of my week.  Next time I see him, I’ll hand over a thumb drive containing all the songs we sampled.  And my hope is that by the time he graduates high school this spring, I’ll have a printed copy of the book for him.

Thursday, 12/29
I’d previously bought a Jiffy Lube oil change from Groupon, and it wasn’t until after purchase I found that it was only good at select locations.  One of them was about 15 minutes away, but I’d originally intended to use it at the shop down the street.  So I went out bright and early, at the crack of 10 AM, to get my oil changed.  I knew there was a Mickey D’s down the block so I built an Egg McMuffin breakfast into my schedule.  All went well with the breakfast and the oil change, but when they did my tire rotation, they found I needed brake pads.  I suspected they would; when I got my new tires last year, the shop told me the pads were pretty low.  No biggie now; I’m glad the car is all fixed up for winter.

When I got home, I hit a couple more chores I had on my list of to-dos.  I did my semi-annual shredding of the paid bills and then bagged up some clothes to give away.  It was only four grocery bags full; not four garbage bags like a couple years back.  I just needed to free up some shelf space and a few hangars in my closet.

That evening I made a super swordfish and watched the last two Hunger Games movies (again).

Friday, 12/30
I fixed a nagging Outlook problem (the email processing app, not my attitude), did some more work on Daniel’s book, and assembled my annual ticket collage. 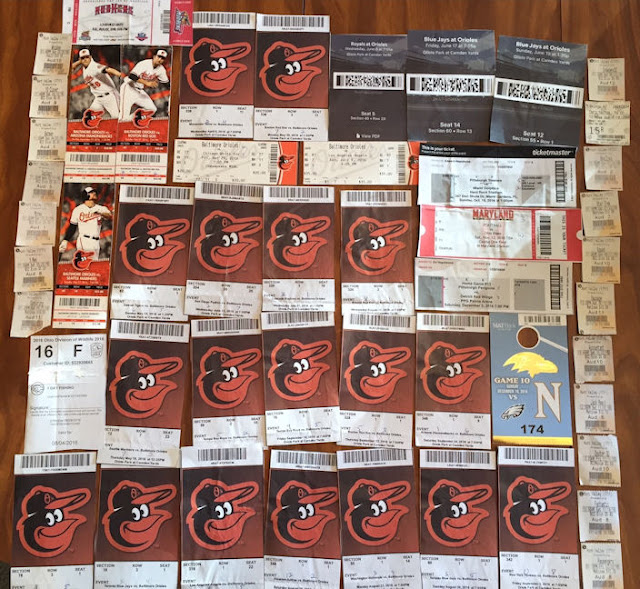 My largest assortment yet, although it probably has the least variety.  I should work on that.

Not a bad year’s worth of activities.

Saturday, 12/31 New Year’s Eve
Finally put on the new flannel penguin sheets I got a month ago. 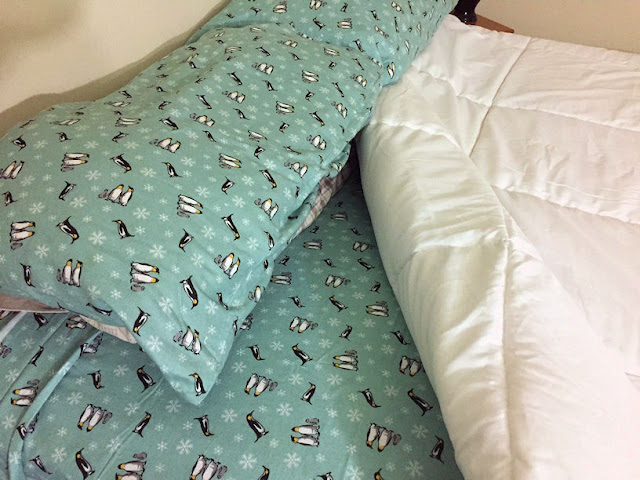 Happiness is a fresh bed… with penguin sheets.

Also did some more work on the book and whipped up some red beans and rice, which should cover at least two more dinners.

Later I went down to Jilly’s to watch Ohio State play Clemson in the Fiesta Bowl. 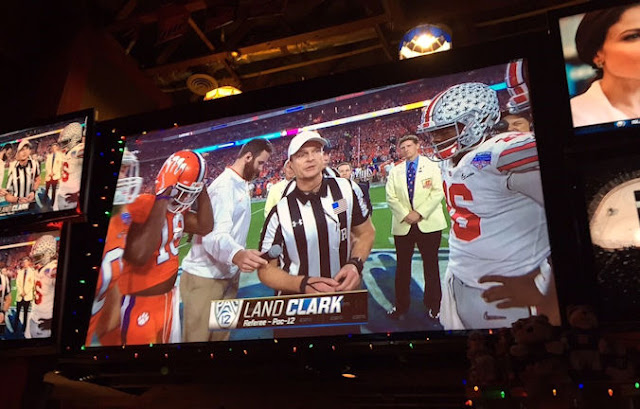 This was pretty much the highlight of the game because Clemson couldn’t score on the coin flip.

I ended up leaving at halftime.  Not only were my Buckeyes getting crushed, I could see that I was basically alone in the bar.  All my friends and regulars were gone and there was no one in there but couples.  Senior citizen couples.  I believe it’s better to be home alone on New Year’s Eve than being alone in public on New Year’s Eve.  And I got to watch the end of the Penguins/Canadiens hockey game, in which the Pens tied the game with under a minute to go and then won in overtime.

Sunday, 1/1 New Year’s Day
Back to Jilly’s for a full slate of NFL football, featuring the Steelers JV team making a comeback win over the Cleveland Brahnies.  (The Steelers sat a number of their best players.)  Also, the Ratbirds looked terrible in their ho-hum loss to the Bengals.

I finished up the Springsteen book Sunday night.  It was a good read if you like The Boss.

Monday, 1/2
Last day before I have to go back to work.  Already I put up my new calendar, which due to its unexpectedly large size, meant I had to switch some other wall hangings around.  I had to use tools, too!  (Sadly, no power-screwdriver.  It wasn’t charged up.)

I’d also been having trouble with my new TV because the picture would dim as soon as I turned out the bedroom lights.  Since those are the only conditions under which I use the bedroom TV, I had to look up how to turn off the auto-dimming.  Yesterday I tried just going through all the menu options but nothing appeared applicable.  The Google helped me today, though, so I’m good to go.

All that’s left to do today is post this bad boy and then go make the steak I have thawing out.

Then tomorrow… Gah!  Back to the salt mines.  At least we open with a 4-day week.

Good luck to you on enjoying a healthy and prosperous 2017.

Director’s DVD Commentary: I’m fully aware that my list of “chores” is basically nothing compared to those who have a house, spouse, kids or even a pet.  So sue me for reaping the benefits of living alone.

You can watch TV from the bathroom? Cool!

Oh god, please don't tell me I have to add a column to my mojo tracking spreadsheet,for sheets...

Absolutely! When I had a buddy come out to visit in 2014, I enlisted his help to get it positioned just right, so I can see the TV from the can. Works really well for football and hockey. But with baseball, it looks like the hitter swings and runs to third base.

Of course! Mojo covers a multitude of diverse doodads.

Now you need to call upon the CFO or the VP of HELL NO to come again and FIX THIS!

No need. I put the new TV in the same place, so the system still works. Might need a bigger mirror though...