I’ve seen a bunch of little items in the news last week, but none meaty enough to fluff up into its own post.  So let’s just jam them together and see what we can make of them.

Not Putting Divest Foot Forward
It’s not surprising that Trump is trying to sidestep the divestiture issue.  He can trot out as many file folders as he wishes, but as long as his family is running the business, he has not divested at all.  Do you think outside influences won’t try to curry favor by throwing business at the sons?  They know it’s Trump’s, Trump knows it’s Trump’s; he’s not fooling anybody.

If there’s a conflict of interest, he’s never going to do something to hurt “his sons’” business.

Further, there’s no reason he can’t buy right back into the business when he leaves office.  Any money the business earns will still be there… unless of course, it’s blown on more commissioned paintings of Trump.

The only way to solve this problem is to sell off his properties.  Yes, that’s a big bite to take, but he should have thought of that before running for president, rather than threatening the head of the Ethics Committee for pointing out the breach.

Taxing Our Patience
Trump still hasn’t released his taxes and now says he’s not going to, because “No one but reporters are interested.”

Falser words have never been said.

Yes, reporters keep bring up the issue of his tax returns because that’s their job: to ferret out information from those in power to provide to the rest of us.

I’m pretty sure his entire goal was to string out the process until it was too late for his refusal to hurt him.  He never had any intention of releasing his returns, because they show what he’s been up to, in stark terms.  You can’t spin data like that.  Either he gave to charity or he didn’t.  Either he has business interests in Russia or he doesn’t.

He doesn’t dare lie on his tax returns, but he has no problem lying to the rest of us.  Hence the continuing dodge.

Pressing His Luck
Speaking of lying through one’s teeth, I saw that our President-Elect has his first press conference.  Remember when Presidents had press conferences and all you read about was what they said?

With this guy, his words can’t stand alone; there has to also be a separate article with that fact-checks.  The Washington Post did one that supplied 14 instances where Trump lied, exaggerated or provided misleading information out of context.

He also spent time attacking the press, which is logical for him, because they’re the ones providing the proof that he’s lying.  Obviously, it would be much easier for him if he were able to lie without being challenged with things like “proof” or “evidence” or “video of him saying the complete opposite of what he just said,” or “tape of him saying what he just said he never said.”  You know how those no-good press hacks work…

CNN took the most heat, for nothing but doing exactly what they’re supposed to do.  They reported a story that was serious enough that the national security services were investigating it, and specifically noted that much of the story was uncorroborated.  (The story is about the Russians having damaging evidence of Trump cavorting with Russian hookers.)

See, that’s journalism.  It’s their job to inform the public of what those in power are doing, even if it embarrasses the powers that be.  Now, to me, it doesn’t matter if it’s hookers or financial sweetheart deals.  What matters is that it’s something Putin can use as leverage to get what he wants out of the president he just had installed.  And we’re not supposed to hear about that?

It was funny how in his own defense, Trump said that we should discount the story because Putin said it wasn’t true.

Sometimes, you have to draw your own conclusions.

Weapons of Mass Distraction
While it often seems otherwise, I think Trump knows exactly what he’s doing.  Have you noticed what everyone’s talking about lately?  Trump’s tweets about civil rights legend John Lewis.

And what were we talking about last week?  Trump’s feud with Meryl Streep.

I think that’s exactly what he wants, because while we’re talking about this fringe stuff that really doesn’t amount to a hill of beans, no one’s talking seriously about the efforts to pack the government with millionaires who want to disassemble the government for their own benefit.  While we’re puffing at each other with righteous indignation, he’s hustling these 1-percenters through the nomination process. 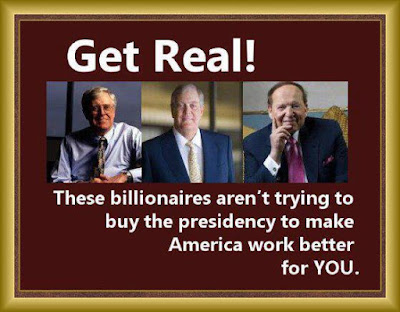 I think Trump sends these inflammatory tweets to keep us right where he wants us, which is obsessing over trivia while he manipulates the land of Oz from behind the curtain.  The last thing he wants is for anyone to notice what he’s doing.


Monkey See, Monkey Do, Monkey Get All Pissed Off
The Republicans really hate it when the Democrats use their tactics.  All this bellyaching about how those terrible Democrats are trying to delegitimize Trump as president?

I seem to remember a five-year campaign to do exactly that to President Obama, by suggesting he is not a legitimate American citizen.  That was conducted without a single shred of evidence, against every official public record that said otherwise and spearheaded by the guy that's screaming the loudest about being delegitimized right now. 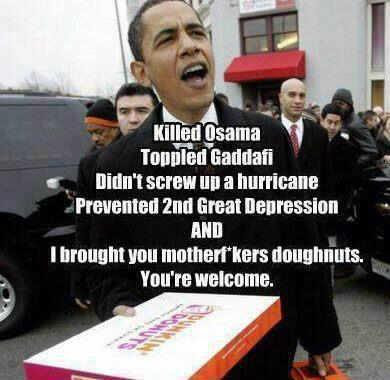 But now, with boatloads of evidence that Russia interfered with the election, and used the very same tactics the Republicans did, we’re not supposed to ask any questions?

Republican pleading for national unity can go fuck themselves right in the ear.  You cannot devote eight years to delegitimizing, obstructing, slandering and raging against an opposing political figure and then expect the opponents to provide a ticker-tape parade for your guy. 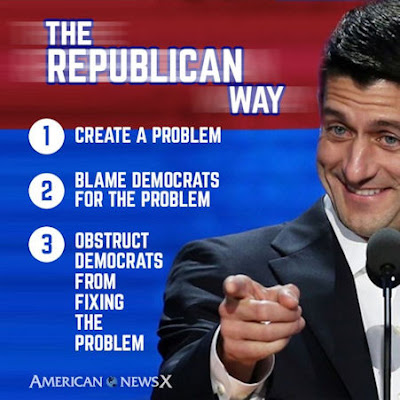 Back when Republicans thought they were going to lose, they had plans in place to tie Hillary up in investigations, block Supreme Court nominations until a Republican was in office, four years later at the soonest, and obstruct like a three-layer cheese sandwich.  But now they want the Democrats to play nice?  For the good of the country?

If they were truly interested in the good of the country, they would have found a way to at least pass an infrastructure bill sometime during the last eight years, which would have provided jobs and fixed our broken roads, bridges, and dams.  But they didn’t pass jack-shit.  The last thing they wanted was Obama getting credit for something, so they held “the good of the country” hostage to their own ambitions.

Reap what you sow, assholes, and you’ve sown a real shit-storm.  Some of us have looooong memories.

Or in my case, a blog where I wrote all this shit down.
Posted by bluzdude at 6:26 PM

Spot On, Bluz. Thanks for the Memory and honest words.

Nicely done. I suppose they'll want a quick confirmation of their next SCOTUS nominee. Hahahahahahahaha!