I often get the urge to “unfollow” friends who keep posting “alternative facts” on Facebook, but then I remember that I’d be cutting myself off from an endless source of blog material.  So much better to copy the meme and then tear it apart here. 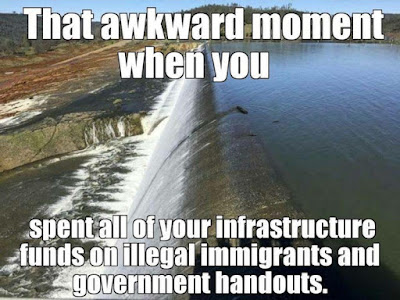 This one’s too easy.  Ahem… Who says we’ve spent all our infrastructure funds?  We haven’t… as if there is any such earmark for this sort of thing.  Congress can spend money on anything they please.  The only thing keeping the money from being spent on repairing roads, bridges, and dams is the Republican congress who would rather front 20 billion for a wall.  Or the Republicans who voted down infrastructure spending bills for the last six years while they controlled Congress.

Notice how Republicans only seek spending offsets (cuts to counter proposed spending) when the spending in question benefits the general public.  No one ever mentions offsets when passing bills that benefit big business or the defense industry. 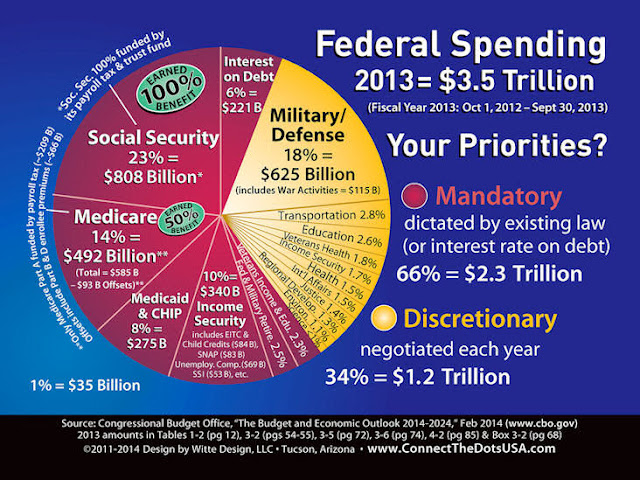 Funny how they always look for the offsets in those tiny little orange slices.

Instead of taking potshots at foreigners and the downtrodden, this meme should really say, “That awkward moment when you realize that the wall you’re building to keep the Mexicans out should have been built around Oroville, to keep out the floodwaters from the neglected dam.” 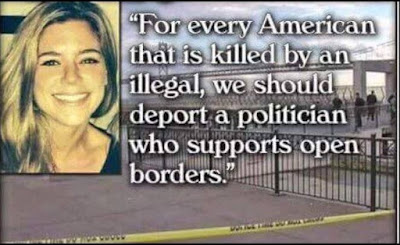 Right, because that’s the real tragedy… the handful of Americans killed by illegal immigrants.  Because we’re all fine with the tens of thousands killed by native-born Americans every year.  We obviously can’t do anything about those, or else the gun fetishists might not be able to get their hands on military-grade assault weapons whenever they get the itch for a new fix, without the crippling inconvenience of waiting a few days.  Or without being told, “No, because no civilian needs a gun that shoots 16 rounds per second.”

Someone wake me up when it’s time for the telethon to benefit those killed by pasty, squinty-eyed, racist, ex-military white men.  I’m pretty sure it won’t be carried by Fox “News” though. 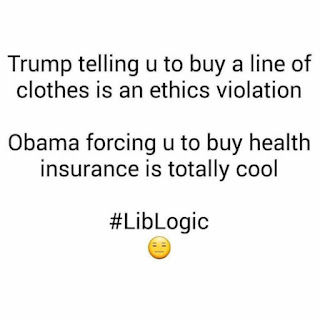 Another complete "apples to oranges" comparison, which should have come with the hashtag, #IdiotLogic. People coming up with arguments like this are either too stupid to know any better or willfully ignorant of the details.  Or just a partisan hack bent on persuading poorly educated people.

The president (or his shills) telling you to buy his family’s line of clothing is a conflict of interest as described in the Constitution.  Said purchase benefits only the product owner and the person who buys the clothing.

Same with creating the scenario in which foreign delegations throw business to a chain of hotels owned by the president and his family to curry favor with the administration.  It’s blatantly unconstitutional and if it was a rich Democrat hotelier in power, Republicans would be screaming bloody murder about the conflict of interest and threat to national security.

Being compelled to buy health insurance is one piece of a larger puzzle in which in return for paying premiums, customers receive health insurance and those in need of coverage avoid being declined.  The whole system saves money for the population in general.  Poor and uninsured people using the ER for general medical assistance and then not paying the bills cost the taxpayers money, in addition to clogging up the ERs.

If the GOP-controlled states would have genuinely participated, instead of refusing to get involved because of partisan politics, the costs would have come down over time.  More customers beget more insurers in the game, which begets competition, which begets lower prices.

Also, I’ve mentioned this before, but where are the complaints about the same government FORCING US TO GET CAR INSURANCE?  It’s the same deal… you’re required to have car insurance so that the taxpayer don’t have to pay for your accident.  Just like with the ACA, you have to buy health insurance so that the taxpayer doesn’t have to pay for your treatment.

Sure, you can refuse to own a car and get out of the insurance requirement.  But we all have a state of health and that will continue right up until the time we needn’t worry about insurance (or anything else) ever again. 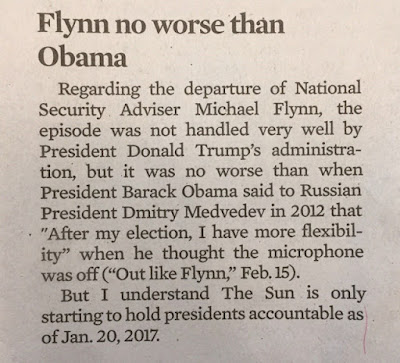 This wasn’t a Facebook meme; it was a letter to the editor in the Baltimore Sun this morning.  Here, the writer proposes another "apples to oranges" comparison, because it leaves out one very important point:  When Obama made the comment about having more flexibility after his election, he was talking about his second election.  He was already the president!  He was indicating there was room for agreement once he didn’t have to worry about how the opposition party was going to skew the news.

That is a situation light years from the one with the Trump administration-to-be.  Foreign powers deal with the executive branch, there can only be one chief executive at a time and Trump wasn’t it yet.  Then, of course, there was that whole “cover-up” thing and “lying to the VP” thing, but why quibble?

But yeah, sure, the two situations are exactly alike, and it’s only biased reporting that keeps the problem from coming to light.

Sometimes I think the newspaper only runs letters like these just to show the void of political thought from the right.

The sad part is that they don't understand and don't want to. I am afraid our education system has failed to teach people how to think.