I had no idea what I was going to write about today, but luckily Facebook came to the rescue.  I can always count on my conservative friends to provide some alternative facts in need of a good debunking. 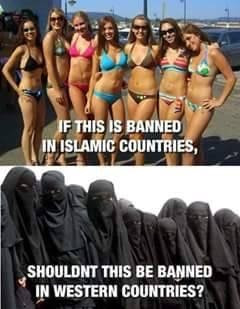 Short answer: No, not unless we’re trying to become a theocratic dictatorship.

Why is it that for as much as they condemn Middle Eastern theocracies, conservatives usually want to do the same things that they do.  They want to pass laws banning enactment of Sharia law, (as if that’s even possible, under the Constitution, to enact), all the while pushing for more Christian influence over government activities.

The religious right is all for “religious freedom,’ as long as it’s THEIR religion.

It’s also worth noting that there’s a large swath of the Bible belt that would like the outfits in the top picture banned as well.  Or at minimum, pixilated.  (Even in real life.) 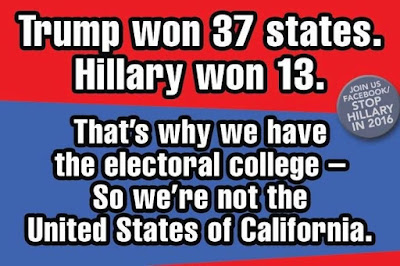 Another attempt to bolster the legitimacy of their asterisked President.

Republicans have a vested interest in keeping the Electoral College for no other reason than it has given them two of the last three presidents.  It’s in their own self-interest.  And I guarantee that if it went the other way around, they would be itching to scrap it.

For some reason, conservatives seem to think that their loss in the popular vote can be mitigated by trying to separate California from the rest of the states.  But it really boils down to this: “Yeah, Trump would have won the popular vote if only you didn’t count all the people who voted for him…”

Democrats could say the same thing… “Without Texas and Oklahoma, Trump loses the electoral vote.”

When it comes to the presidency, the state by state breakdown shouldn’t really matter that much.  The president represents the whole country.  It’s Congress that was designed to level out the non-uniform population of the states.  That’s why we have a House of Representatives that is tied to population, a Senate that provides the same level of representation for every state, and every law must pass both houses before being brought to the president.

How people are arranged throughout the country should not be a determining factor in a presidential election.  Major cities have more population than the entire state of Wyoming.  States that contain these cities should have more of a say than a state where people are outnumbered by cows.

A vote is a vote and Trump lost by almost three million of them.  There’s no way to massage the numbers to make it not so.  (Well, other than to claim they were 3 million fraudulent votes and they all went to Hillary, and then provide no proof whatsoever.) 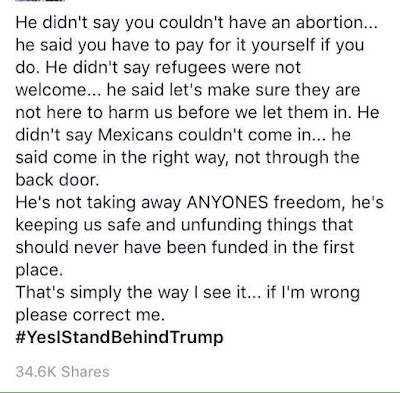 This one came with a plea to just give the man a chance.

We’ll give the man the same chance Republicans gave the previous president.  Which is to say, “None.”

Let’s take this one line by line, shall we?

“He didn’t say you couldn’t have an abortion, he said you have to pay for it yourself.”

If that was true, then he didn’t have to say anything at all, because that’s been the way it is for years.  There are no public funds used for abortions.  Zero.  Yet he’s joined the Pence push to defund Planned Parenthood, which means they’re really preventing money from going to reproductive health care and birth control, the latter of which is the number one way to lower the need for abortion.  If Republicans were serious and genuine about reducing the number of abortions in America, they’d double or triple the funding for Planned Parenthood.

“He didn’t say refugees were not welcome… he said let’s make sure they are not here to harm us before we let them in.”

Refugees already had a 2-year vetting period, wherein the government made the determination that they (meaning the mostly women and children) were not a threat.  Stopping all visa and green card holders, many of which had already been living here peacefully for years, is a knee-jerk reaction to white people’s sense that they’re losing their influence.  If this were really about safety, why were the countries who supplied all the 9/11 terrorists exempted from the order?  (I mean, besides the fact that Trump and a bunch of oil execs/big GOP donors have substantial business holdings in those countries.)

“He didn’t say Mexicans couldn’t come in… he said come in the right way, not through the back door.”

No one debates that we should try to prevent illegal immigration.  But he’s spending 20 billion dollars on a wall to try to keep them out, even though it’s the most ineffective deterrent available.  With the same kind of executive order, he could decree that there be stiff penalties and jail time for hiring undocumented immigrants and send the justice department out to find violations.  The jobs would dry up and thus the flow of illegal aliens.  Granted, a salad would cost us $25…  But the GOP is not going to do anything to stymie business owners.  Better to blow all that money on a wall.

Meanwhile, conservatives moan about how we can “pay for refugees but not war veterans.” 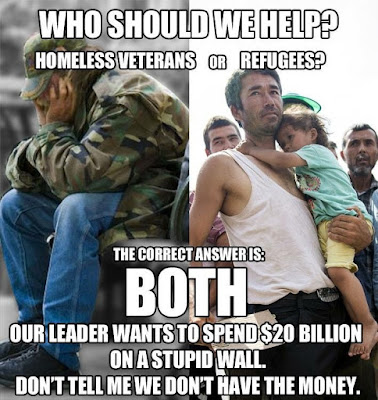 “He’s not taking away anyone’s freedom, he’s keeping us safe and unfunding things that should never have been funded in the first place.”

This one’s hard to dissect because it’s so vague, I have no idea to what the author refers.  But I can see several freedoms Trump and his moralistic “advisors” are seeking to remove:

·        Freedom to choose if and when to reproduce, by seeking to defund (and therefore close) the most common places to obtain an abortion (or long-term birth control.)

·        Freedom to vote without jumping through expensive hoops, designed with “surgical precision” to prevent non-Republicans from voting.

·        Freedom to come and go from this country as we please. (The “we” being limited to anyone born (or whose parents were born) in select Muslim countries.)  Contrary to the prevailing conservative wisdom, the Constitution applies to everyone within our borders, not just citizens.  So sayeth the courts.

·        Freedom of the press to report on matters of interest to the people of the United States.

So far, the only freedom the right seems to be promoting is the freedom to discriminate based on one’s religion.

Then there are the things they’re trying to “unfund,” like:

·        Planned Parenthood, the most important source of health care for low-income women.

·        National Endowment for the Arts, the cost of which can only be seen with a microscope, when compared to the defense budget or oil company subsidies.

·        The Affordable Care Act, which SAVES money for the country over time, by providing preventative care and staves of using the ER as a primary care service, often at taxpayer expense.

·        Public schools and the EPA.  Both departments had cabinet members appointed who have stated intentions to blow up the institutions they now run.

“That’s simply the way I see it… if I’m wrong, please correct me.”