An Update From Cloud Nine

It’s been about a month since I dropped that little happiness bomb and told you about my new honey.  In addition to being tired of complaining about the new regime, I figured it’s about time for an update.

But because that would make way too short of a post, I should probably flesh it out a bit.

We’ve been getting together once during the week and then spending most of the weekends together.  It’s been really great.  She’s such a calming influence on me… very chill.  She has an aura that says, “It’s all good, just relax and enjoy.  Everything’s OK.”

I really need that, because I tend to over-analyze things and get worked up over minor details.  She just lets me go off and then reels me back in again.  Always with a smile.

She’ll probably laugh when she sees this because she’s always telling that between her dog, her live-in relative and her friends that pop by most every night, her house chaotic.

And she’s right, but it’s also where I find my peace.  It’s been six weeks and we’ve barely had a disagreement, let alone any kind of spat.  Maybe it’s because as a teacher, she’s skilled at handling small children, I don’t know…

Friday Night Dance Party takes place most every week.  She cranks up the Motown and other fun music and she and her friends drink and dance and carry on.  Best of all, they seemed to have accepted me into the tribe.  What’s not for me to like?

She’s an amazing cook, too, and remarkably enough, even my well-documented culinary idiosyncrasies haven’t prevented her from feeding me like a king.  She gets me.  She thinks I’m funny and loves the way I put things, in my often-unusual way.  She doesn’t necessarily understand my spreadsheet fixation, my penchant for keeping lists or need to wear game jerseys while watching sports events on TV; she just accepts it and gets out of the way.

Unconditional acceptance is a beautiful thing.

Anyway, meeting her friends was a breeze.  Meeting her dad, however, was unexpected and a wee bit stressful.

It was Super Bowl Sunday.  We planned on doing our own things that day; she was having Dad over for an early dinner because he wanted to be back home in time for the game.  I was going to go to my usual sports bar and watch the game there.  Not expecting a huge crowd, I was planning on getting there about an hour before kickoff, about 5:30, to make sure I got my regular spot at the end of the bar.

Around 5:00 I was just stirring from my afternoon nap and getting ready to jump in the shower, when she texted me, wanting to know if I was at the bar yet.

“Do you want to meet Daddy?”

At first, I thought she meant that they’d drop by the bar.  I asked for clarification and she said… well, let me show you… 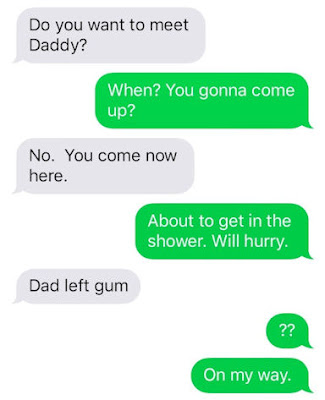 “You come now here.”  That didn’t sound like a suggestion.  In fact, I don’t know what that sounded like… maybe Arnold Schwartzenegger after too much wine.

Anyway, at that particular moment, I was thinking, “Oh HELL no…”

I mean, I was all set to watch the game at the bar and had planned on getting there at just the right time to get my usual seat.  I’ll admit that I don’t adapt to changes of plan very easily.

I hadn’t stewed on it too long before I had a moment of clarity: “Dummy, when your new girlfriend wants you to meet her dad, you get your ass over there.  Period.”

Thus, I went from an internal debate on what I should do to a planning session on how I should do it.  So I accepted and let her know I had to catch a shower and then I’d be on my way.

Shortly thereafter, she informed me that “Dad left gum.”

I had no freakin’ idea what that was supposed to mean, other than I wouldn’t get there in time because he’d left already.

Later, we agreed that it had to be an auto-correction, but she had no idea what she was trying to type.  It’s been a running joke between us ever since.

Anyway, it went fine with her dad.  I just had to keep a lid on my liberal attitudes, which I knew going in, even before I saw his bumper sticker proclaiming the value of both Jesus and guns.  (It told me I should pray to Jesus that I don’t get shot.)

Even though I was wearing my “Six Times Super Bowl Champion Steelers” hat, we found common ground that we were both rooting again the Patriots.  I’ll take the win wherever I can get it.

After he left, she and I sat and watched the pregame festivities together while I simultaneously kept an eye on my watch, wondering when I should make a break for it and run out to the bar.

Just before kickoff, I had a second moment of clarity.  This one told me, “Why on earth would you go sit on a bar stool surrounded by a bunch of drunks, as opposed to watching the game all curled up on a couch with a beautiful girl?”

Needless to say, I let someone else fill my bar stool that night.

I learned something else while I’ve been visiting Sweetpea… Did you know that guys and gals stock their refrigerators in completely different ways?  Here, try this test:  One of these is hers and the other is mine.  Guess whose fridge is whose. 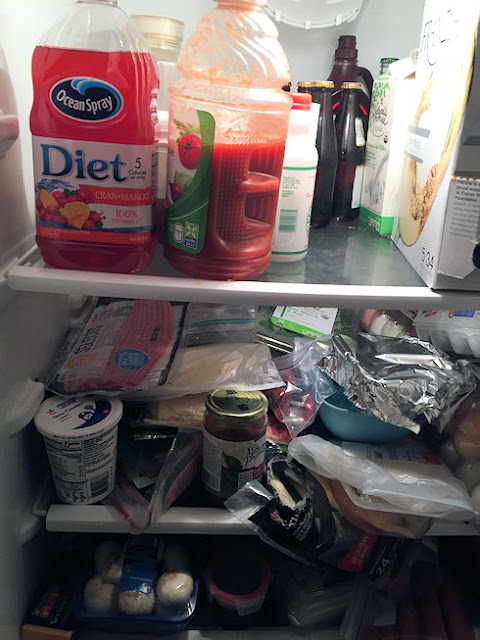 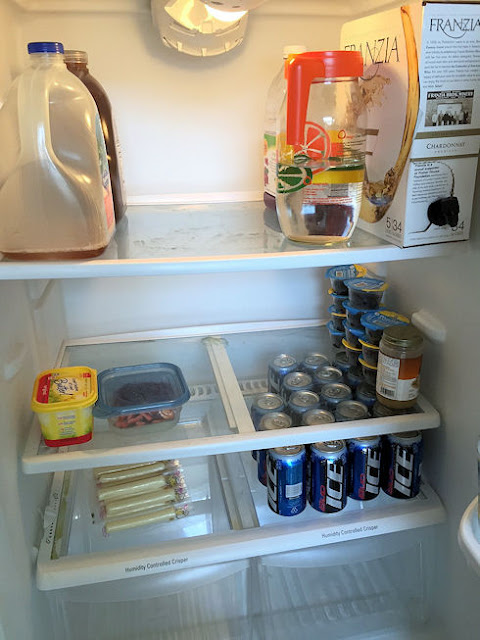 Wait, are you sure you don’t want to think about it some more?

OK, OK, right… mine is #2.  Cheese sticks, olive cups, a jar of gravy and cocktail weenies (in the plastic container); that’s the extent of my food.  Although if you count the condiments in the door, I’m stocked to the gills!  And my freezer is full too, for what that’s worth.  But she’s got a veritable produce department in hers, as well as a vast assortment of meats and cheeses.  YES, including cheese sticks!  (But they’re for the dog.)

We also differ as to what we consider a “find” in the store.

Last weekend, we went out to a local “overstock” store named Ollie’s.  It’s one of those “Big Lots” kind of places where you never know what you’ll find in there from week to week.

While she was consulting the Great Wall of Dog Treats, I went in search of my own treats, which led me to the Pop Tart aisle.  Have you ever seen these before? 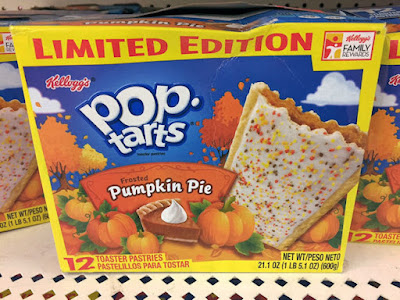 I’ve never heard of Pumpkin Pie Pop Tarts before… I wasn’t exactly coveting them; I thought it was merely a curiosity.  Didn’t see how they could possibly be any good, not without whipped cream, anyway.  But then I heard someone call out from another aisle, and what he said caused me to investigate. 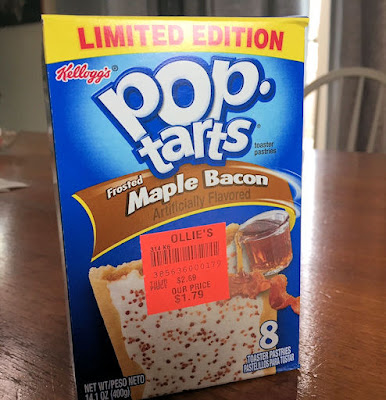 Holy crap, it’s the Holy Grail.  I could hear a choir of angels as I gazed upon the box.  Again, I’d never even heard of these things before, yet I knew I had to try them.  Sweetpea thought I was nuts, and indicated such by making gagging and retching noises.  Undaunted, I put them in the cart anyway.  I figured I owed it to YOU, my bacon-loving friends, to determine if Maple Bacon Pop Tarts are the real deal or just another lame stab at the bacon craze.  (Plus... a dollar ninety-seven!)

Then I also came across these: 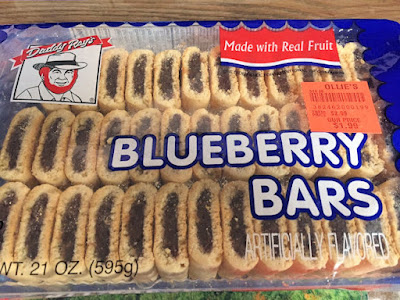 Off brand Fig Newtons, made with blueberry instead of fig.  Worth a try, right?  Mom always told me I was obsessed with blueberry Pop Tarts as a kid… when I could get them from Grandma!

Cut to Sunday morning, as I conducted my food experiments. (Or in other words, ate breakfast.)  Here is what I concluded.

So that’s the news on the home front.  All systems: Go.  Next week, I’ll be back to bemoaning the state of the Executive Branch.