Things have been going swimmingly with my Sweetpea and me; so easily, in fact, that it makes me wonder why things were always so difficult for me in the past.

But the one variable that remains is a dogged one.  And I mean that literally.

Sweetpea has a 4-year old yellow lab, (aka The Beast), who she has essentially raised by herself.  That means they have an intense bond that is scary-strong.

Now, I’ve always loved dogs.  I think dogs are often better than people, especially judging by Facebook postings.  But I haven’t had a dog since I was in college.  In fact, no one in my family has; we’ve been exclusively a cat family for decades.

The Beast has never been mean or hostile to me; on the contrary, I get a huge greeting every time I come in the house.  And I’m not even bringing treats anymore.  Although I will admit that the intensity of the greeting has decreased since the treats have stopped.  I still get a few jumps and face licks, but as soon as he sees my hands are empty, he rapidly loses enthusiasm.  And when his “Mommy” and I come in at the same time, well, I might as well not even be there.

Director’s DVD Commentary:  Yes, Sweetpea calls the Beast her “Son” and she is his “Mommy.”  And when we first started dating, she said her son needed a “baby-daddy.”  (And I applied for the job.)  I know some people get offended by using those terms with pets, but too bad.  They get to name their own relationships, not anyone else’s.  In my home, our pets were always called our “fur-brothers” or “fur-sisters.”  Ain’t no thang…

And if we’re busy talking, or heaven forbid, hugging, he’ll start “talking,” in a sort of guttural, back-of-the-throat onslaught of vowels.  “Can’t you see me sitting here?  I’m right here, and I want to play ball!  If I had thumbs, I’d throw a bucket of cold water on you two…”

If you were to hear him, without being privy to what’s going on, you’d be like, “Who is torturing that poor dog?  He sounds like he’s being torn from his soul!”

Like toddlers, they don’t understand the concept of “enough.”  She can take him for a 45-minute walk, feed him like a king, go outside and have a session or two of throw-the-ball-and retrieve, and as soon as they come in, he wants to know what they’re going to do next.

Hah!  Feeding… I bet that dog eats better than some of her schoolkids.  If we’re having breakfast, she makes him an egg, and he gets a slice of whatever else we’re eating with it.  If she grills, she makes him his own burger.  His regular meal has blueberries and cheese and broth and whatever else is left over added to it. 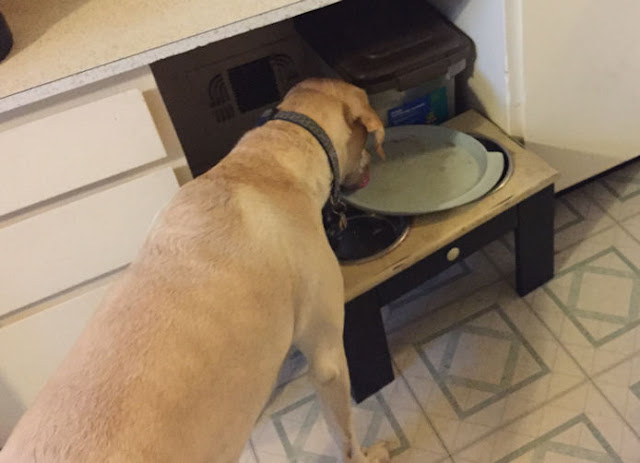 No, he doesn’t always get a full platter; he’s just licking up the meat juice.

They have a “training” routine that cracks me up.  She cuts up half of a weenie and a cheese stick and she puts him through the paces.  Sit, stay, leave it, kiss mommy, heel, down… etc., with each feat rewarded with a goodie.  The thing is, the only time The Beast will obey any of these commands is during the Routine.

I often joke with Sweetpea that he is actually training HER and this is really nothing but a highly-ritualized snack producing exercise.  I’m like, “I’ll be impressed when you tell him to stay when he clearly doesn’t want to stay and there is no treat in sight.”

But let me be clear; none of this really bothers me… I kind of get a kick out of it.  I like having a dog around and their dynamic amuses me.  But yes, it can be a pain sometimes.

When I go to her place after work, they’re playing ball (or just finished) and then she makes dinner.  He gets his dinner when we eat ours.  Then he gets a bit of our dinner once we’re done.

After cleanup, it’s back outside for another ball game.

When done, Mommy comes in to sit down with me and have a drink.  Dog stands there peering intently at Mommy, not moving when she implores him to sit with us on the couch.  (He has his own area(s).) 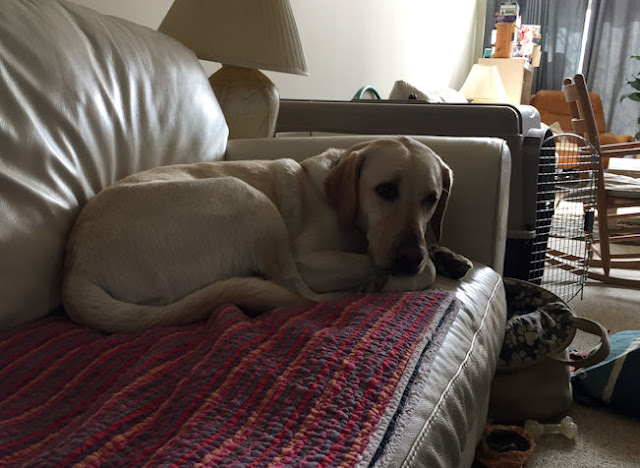 The Beast in his spot.

He brings a toy over, not to hand over for tossing, but to be tugged on, or for us to chase him.  (That’s his favorite thing… to be chased around the room.)  She reaches for the toy, but he backs away, head cocked, still staring intently.

If we go back to what we were doing, talking amongst ourselves, then the vocalizing starts, usually with a grunt or two.  Then it becomes the long, tortured vowel movements where you’d think an alien is about to burst forth from his noble chest.  If there is still no response, (to his liking) the barking commences and that’s when The Beast gets in trouble.

Labs have a Big Dog bark.  Barking inside the house amplifies that into a nerve-jangling knife-edge.  Then either he goes in the crate for five minutes, (bad) or Sweetpea goes in her own room and shuts the door (worse).

The funny thing is that I think he’s barking because we already caught onto his other trick.  When I first came around, when he wasn’t getting attention and the vocalizing didn’t work, he’d go steal something of ours… usually something of mine.  My shoes, my slippers, Sweetpea’s glasses… one time he nosed into my overnight back and pulled out a folded pair of clean underwear, with which he ran around.

So now, when I come in, my shoes go in the closet, my clothes stay in the bag and I zip it up.  There’s not much left of ours for him to steal.

But that’s how smart he is… like, problem-solving smart.  We defeated one ploy so he created another. 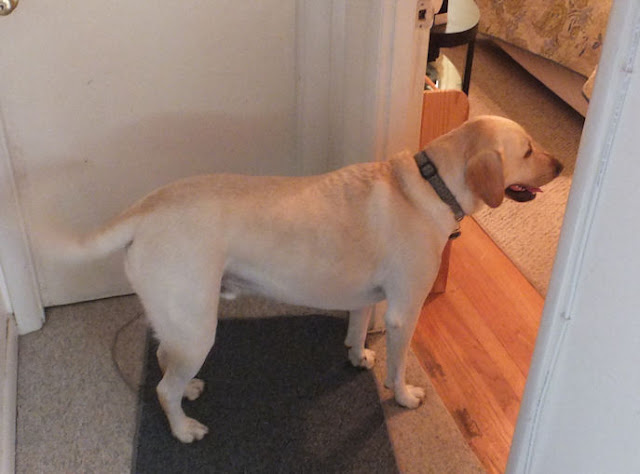 The Beast, staring at Mommy while she gets dressed to go out and not play with him.

Remember when I wrote about how we got on well from the start?  That is literally because Sweetpea told him about me and he understood.  I don’t doubt that a bit.

It might sound like I’m just bitching about the dog… I’m really not.  I think the situation is hilarious (other than the barking).  And he’s just a product of his upbringing.  For years, it was just the two of them.  He had her undivided attention for most of the time she was home.  Who would give that up without a fight?  No rooster wants to see another rooster in the henhouse.

The weekends have a different issue.  On weekdays, Sweetpea gets up around 5 AM for school.  So on weekends, she used to just do the same, out of habit.  Dogs don’t understand weekend sleep-ins, so he was raised to be ready for the day at 5:00.

We had a good time this weekend though.  I found out that he loves to watch horses.  He sat and watched the Kentucky Derby with us and rarely flinched from the screen. 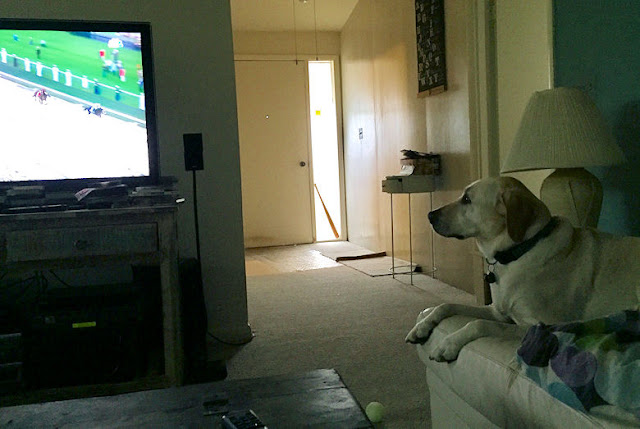 Talk about a dog and pony show…

So now all we have to do is find some horse videos for him, or maybe subscribe to an OTB cable channel.  If we leave it on all night, we just might be able to sleep til’ 7:00!

I’ve seen what he can do to a big, thick bone.  I definitely want to stay on his good side.

What is his name? He is a good, loyal friend. How rare and special is that!

I'll tell you off-line. But yes, he's a very good boy, and good protection for his Mommy. No one would dare step foot in there, without permission. Wooof!

Get him a girlfriend. Go to the pound and get a small but very active spayed female, like a mature Jack Russel or beagle. Introduce them on neutral territory and let him "bring her home with him". You'll see a lot less begging for attention.

Oh, he has a girlfriend... she just doesn't live there. His heart belongs to his mommy's neighbor's black lab. Other girl dogs approach him on their walks but he's indifferent. When this one comes over, they're besties. All Sweetpea has to do is say, "Your girlfriend is coming over," and he'll go and wait by the door.

Unfortunately, the gf is a bigger spaz than he is. Maybe we can get him interested in a smaller model...

Fur persons are great fun. I have been dogless for about a year, but still have 10 cats, assorted horses, and chickens. As of today I have our work(office) dog as her owner is going to Europe for three weeks. She is 14 and we will have to be inseparable for the next three weeks. The benefits usually outweigh the costs.