We interrupt the stream of personal and family-oriented stuff I’ve been running lately to talk about some of the political whatnot this week.

Tough week for Weiners, don’t you think?  I haven’t seen the doors come off like that since the end of The Blues Brothers movie.
Like a lot of liberals, I liked Anthony Weiner.  He was quick, funny, and hit hard on issues I believe in.  I just wonder how he could have been so monumentally stupid.  Do these politicians never learn?  I mean, the roadside is littered with the corpses of politicians that thought no one would ever find out.

I mean, I can kind of see what happened… Here’s a guy that was probably a nebbishy kid and not very popular with the ladies.  Now he’s got some power and stature and wants to stroke his ego (and other things) a little.  (Remember that President, a few terms back?)

When the story started breaking, I was so hoping that it was just another dirty trick by some right-wing blogger out there.  But once I saw his press conference?  Sheesh.  Most unbelievable denial of all time.

Just once I’d like one of these guys to just come out and go, “Yeah, it was my dick and it’s none of your freakin’ business.  What, do you think I fold up after the session lets out and get put away under my desk?  The Ween’s got needs.  No one works on the People’s Business 24/7, and those that say they do are lying.  You got something to say about my legislative work, bring it on, otherwise, you’re cordially invited to go fuck yourself.  Peace…”

But then, there’s a wife involved in it too.  Ugh.  That amps up the damage.  Gonna be on garbage detail for a while.  He’d better go shopping for one of those big-ass Kobe Bryant “I’m Sorry” diamonds.

Of course, the Republicans are all over it with their mock indignation.  I’m sure they’re just relieved that it’s not one of them this time.  The head of the Republican National Party called for Weiner’s resignation yesterday.  Funny how I never heard any such calls for Sen. John Ensign.  So if I read that correctly, sending a pic of your underwear-wrapped peen is worse than having an affair by banging your chief of staff’s wife and then paying hush money to buy his silence.  Ensign didn’t resign; he rode out the end of his (6-year) senatorial term.

But that’s commerce… goods bought and sold… money changing hands.  No wonder the Republicans didn’t find any outrage over that.

One part of me thinks that he shouldn’t resign.  For one, he didn’t commit a crime.  As far as I know, it’s still legal to send a picture of your swaddled love monster to another consenting adult.  It doesn’t make you a bad legislator; it makes you a bad husband.  And personally I don’t give a shit what our congressmen do in their spare time, with other consenting adults.  I’m just glad when they’re screwing someone that wants it, for a change.  And if his wife wants to throw his ass out into the street and file papers, do it!  Take him to the freakin’ cleaners.  Just make sure he’s back on the job when it’s time to vote on the next big bill.  I think he should have to submit to a lecture from Maryland’s own, Senator Barbara Mikulski. 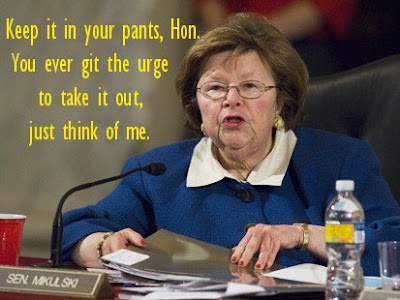 Senator Barb will give him the old what-for.

I think it’s a mistake to expect every lawmaker to be perfect.  They’re not and we’re not.  We shouldn’t be surprised when these guys do something stupid.

Oh yeah, there’s the other point.  Why would I want someone to stay in office that is stupid enough to pull that shit and think he won’t get caught?  And then lie about it?  The truth always comes out.  The media makes sure of it.

And by the way, that’s some “liberal media,” right?  Just passing right by the story to protect their liberal icon.

This is just one more chunk taken out of the right’s Liberal Media whining.  Listen, it’s the media’s job to play an adversarial role to government, no matter who is in charge.  I don’t see Weiner getting any breaks, just like I didn’t see John Edwards getting any breaks or Clinton getting any breaks.  The media forces out the truth, period.  I think it’s just that when they do it to the Right, they can’t handle scrutiny of their crooked ways, so they have to blame the messenger.  The only way to counter the damaging facts that get uncovered is to claim bias.  And sadly, it works. 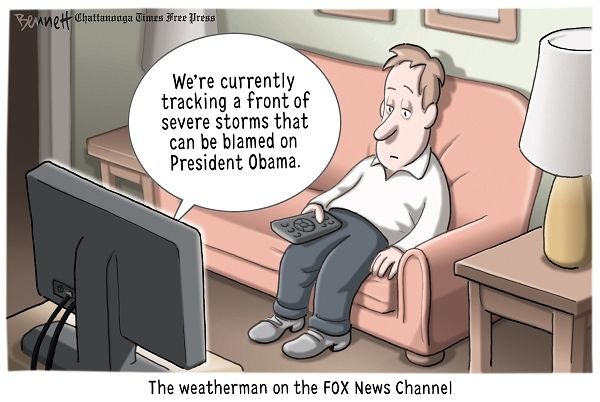 When Fox “News” crows about being “fair and balanced,” it’s nothing but window dressing.  When you prop up everything one side does and excoriate everything the other side does, even when the side you’re raking is doing the same shit that “your side” has done, that’s not being a journalist, that’s being a shill. 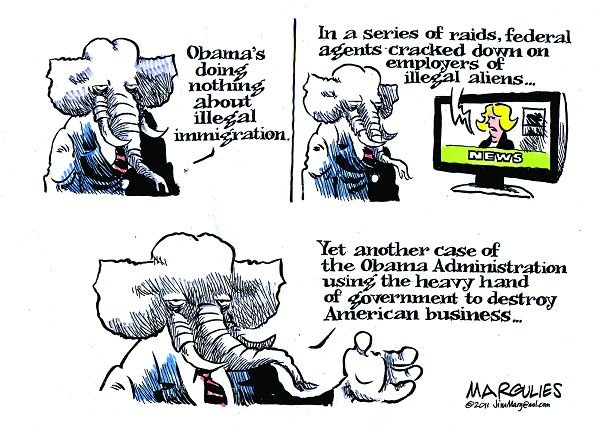 And speaking of the Unpaid Arm of the Republican National Committee, aka Fox “News,” I had one very important issue about them answered for me this week.  You know how they’re always running some kind of inflammatory graphic and then claim it’s a mistake?  Like when they “accidentally” caption a picture of Obama, “President Osama?”  They say it was a simple mistake.  And then it happens again, and it was another mistake.  And the mistake is always to the detriment of the Democrat.

I always wondered if that was malice or incompetence and this week we got the answer. 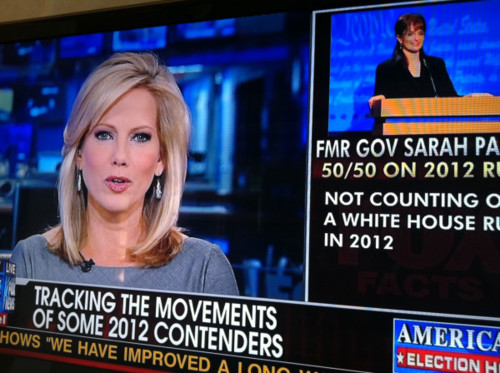 Fox “News” did a piece on (their own special correspondent) Sarah Palin and used a picture of Tina Fey, impersonating Palin.  So I guess the answer is “incompetence.”

But after this incident, they sent an internal memo around threatening disciplinary action against anyone that screws up like that again.  (It’s in the article linked above.)

Right.  Nooooooow, it’s a serious matter, when it’s their own golden calf that they’ve slaughtered.  Come to think of it, I think they’re malicious AND incompetent.

Speaking of Caribou Barbie, you may have heard she gave a less than stellar history lesson last week in mis-describing the Midnight Ride of Paul Revere.  You know… the tale that every kid learns in grade school?

I’m not going to get into all the details of that story, but there was one episode that I found indicative of the typical Republican manipulation.  First of all, rather than just say she misspoke, like a normal person does when she’s totally and obviously wrong, she trotted out this half-baked parsing of words about how since the Americans were still British subjects, he really was warning the British.  And to make matters worse, her lackeys logged into Wikipedia and began changing the entry regarding Paul Revere, in order to make her version less, well... wrong.  Fortunately for those that like our history to be recorded the way it actually happened, these changes are being deleted as soon as they’re posted.  Long live Academia.

She also claims it was a “gotcha” question.  You know, I expect “gotcha” questions to be more like, “Who is the foreign minister of Whogivesafukistan?”  Palin obviously has another standard.  If “What newspapers do you read?” is a “gotcha” question, I’m sure that Fox “News” won’t ask her anything harder than the questions the knights had to answer before crossing the Bridge of Doom in Holy Grail.

What is your name?

What is your favorite color?

What is the airspeed velocity of an unladen swallow?

Anyway, back to Anthony Weiner being stupid.  It’s not just that he’s sending pictures of his deli-rye across the internet to someone other than the Missus.  What I want to know is that in the entire history of pictures, has a girl ever been won over by a picture of some guy’s meat whistle?  I mean, the dude was a pretty glib guy… he should have made that work for him.  Why leave your cheese hanging out in the digital wind?  I’m almost 50 and I’ve never felt the need to snap a pic of Bluz Junior and send it anywhere.  And I’ve even been asked!

I think this is one place where we take a page out of the Teabagger’s Handbook and make all of our politicians take a pledge: The No Peen Pledge.

Do you, Senator Horndog, vow to keep your peen under wraps?

And do you swear that you will never photograph said ‘peen’ for any purposes other than perp identification?

And do you swear that you will adopt a life of monogamy for the duration of your term, or death (by natural causes) of Mrs. Horndog, whichever comes first?

Do you agree that you may wave the flag, wave to the crowd, wave your rights, catch a wave, enjoy the amber waves of grain, but you will NOT wave your willy?

And if you should break any of these commitments, you accept that Mrs. Horndog will be allowed to administer the Bobbett Solution?

Just in case you’re wondering, there will be no such reciprocal pledge for our women of Congress, who thus far have been able to refrain from flashing their hooters from the Capitol steps.  Not sure what will happen if they elect a Congresswoman from Louisiana though.  No beads on that campaign trail, I tell ya…
Posted by bluzdude at 9:04 PM