This has been a pretty weird stretch for me lately.  Remember the cold I had 3 weekends ago?  It’s still hanging on.  I mostly feel OK, but I have this chest congestion that won’t quit.  I’ve been coughing and hacking up chunks of butterscotch for two solid weeks now.  It’s getting pretty old, not to mention disgusting.

The act of coughing, itself, has spun off more problems for me.  At first, it was killing my neck, to the point that at the end of the workday, I couldn’t turn my head to either side.  When I coughed, I had to grab both sides of my neck, just so my head wouldn’t fly off.  Luckily, that subsided after a couple of days.

Then my ribs started to hurt.  I felt like I just got out of a dryer filled with rocks.  I went home early from work on Thursday and stayed home Friday, in a last ditch effort to beat it once and for all.  As I continued to cough out all the gunk, I started getting a pain in my lower back, at the top of my sacrum.  (Technical term: the upper ass, just above the ‘old Norge.’)

On Saturday, the inevitable happened and I coughed so hard I ended up throwing up half of my dinner.  I was pissed because it broke my streak of not hurling for more than 10 years.  On the bright side, I noticed I lost 5 pounds over the weekend.  Maybe there’s something to this “bulimia” after all.

So even with a sore lower back, I came into work on Monday, determined to just grind it out.  But then I had to go and refill my ice water mug.  When I bent down so get a scoop of ice, my back went completely ballistic… blinding, crippling pain shot up and down my back and left leg.  If I hadn’t been able to hold myself up with the counter, I’d have been on the kitchen floor.  I didn’t even know if I could get back to my desk.

Yes, the pain subsided enough for me to hobble back to my seat, but it just pulsed and throbbed to the point that I couldn’t really concentrate on anything.  Every cough was like sticking a knife into my back.  My boss, being a kind and merciful sort, put my out of my misery by sending me home.  I picked up some (Walgreen’s brand) Mucinex on the way.

Luckily, I still have the frozen corn I used during the physical therapy I had on my shoulder, so I was able to ice my back.  Then Pinky, a licensed massage therapist, went to work on it for about an hour.  (If you don’t have a significant other that’s a masseuse, I highly recommend getting one.)  After a nap, I put a heating pad, some Advil and several beers on it, before going to bed early.

One of those things must have worked because I feel 90% better this morning.  I still have a twinge but it’ll be OK as long as I watch how I bend.  (I know I shouldn’t have been bending at the waist, but I was trying to save the wear and tear on my knees!)  And the Mucinex is working too because I had a good, non-coughing sleep and a non-coughing day thus far.  I still feel the tightness in there, but I don’t feel the need to cough my head off, or bolt for the restroom.

Did you know that there’s no graceful way to cough out a loogey in a cubicle environment?

Anyway, I didn’t even want to get into this but I wanted to explain why I didn’t post over the weekend.  I suppose a more condensed version might have gone like this:

“Sorry I didn’t do a post this weekend; I was sick.”

But doesn’t knowing all about the nature of my phlegm discharge draw us closer together?  No?  OK, forget I mentioned it.  I just wanted to flesh this post out a bit because what I really want to write about is too short.  But here it is…

Remember from last winter when I posted about Dad picking his first orange from a tree in his yard?  Well, he’s having a go at figs now. 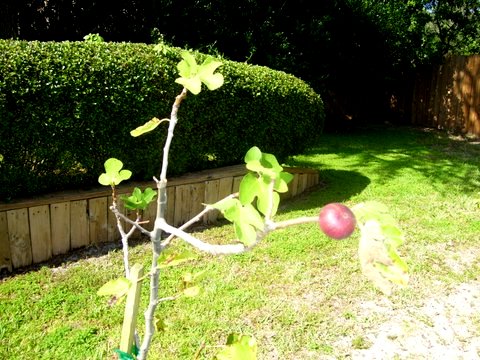 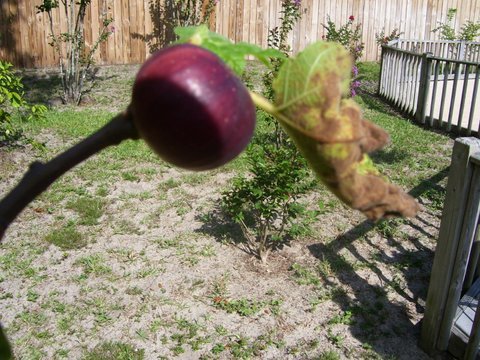 I swear it looks like he glued it on. 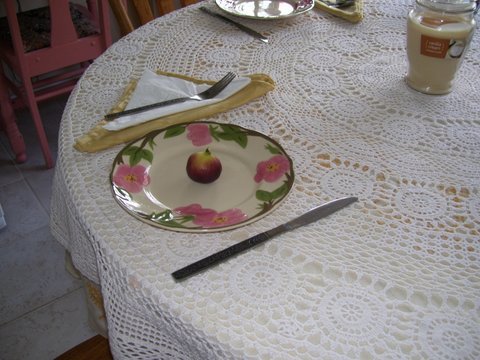 Time for the Harvest Feast!

Obviously I had to respond to the email, so I wrote back, “Glad your crops came in.  Now go fig yourself.”

That’s just a fig-ure of speech.
Posted by bluzdude at 6:55 PM