I have to caution liberals and other sentient beings about trying to get our current president/clown removed from office.

I’m not saying that he shouldn’t be… after all, we’ve never seen such a combination of incompetence, petulance and pure profiteering coming from the office of the President.  But if 45 WAS impeached or forced to resign, what happens next?

I say, there’s no point in removing Trump without also getting rid of the rest of the posse.  Next man up is Pence, and he’s the one who scares me.

Trump is a pragmatist; I think he’s using the social conservatives and alt-right racists to bolster his numbers so he can go about the very Republican business of bolstering big business at the expense of the rest of us.  So sure, he throws out a couple bones… Muslim ban here, religious “liberty” (to treat gays as second-class citizens) there, and he mollifies his supporters.  But I don’t think he really believes that stuff.  He only believes in making money for himself and his family.

Pence is a true believer.  He really thinks the gay community are undeserving of common decency and respect.  He showed us that by signing one noxious state law after another when he was governor of Indiana.  He is a religious holy roller with a keen interest in promoting narrow Christian ideals into government policy.  Of course, he’ll gladly omit the Christian ideals of healing the sick or feeding the poor, because the needy obviously don’t work hard enough.

And speaking of healing the sick, the next batter up, Speaker of the House, Paul Ryan, is known for his draconian budget proposals and help no-one health care initiatives, which further squeeze the poor in favor of tax cuts for the rich.

If either of these two become president, exactly nothing will change from what we have now, other than they will get these ponderous policy changes passed without shooting themselves in the foot every other day.  They’re consummate politicians, so they know how to get these things passed, in the houses they control, quietly and without disturbance.    The sideshow will leave and be replaced by the icy indifference of loan sharks.

None the less, the whole impeachment debate seems pointless to me.  I mean, the Republicans are going to have to be the ones to pull the trigger and I just don’t see that happening in the House.  The same racists, isolationists, and moralists who voted for Trump also voted for their GOP representative.  How anxious do you think they’ll be for overturning the will of their carefully gerrymandered districts?  No, they won’t buck the Prez until they’re made to by their constituents.

And what happens when their constituents show up and complain at town hall meetings?  The dissent is blamed on those from outside the district.

I don’t think anything changes with the rank and file GOP until people start losing their insurance for real.  Granted they’ll still find a way to blame it on the Democrats…

Debunkery – The Statue of Limitations Edition
I haven’t enjoyed a good debunking in a while so I’m leaping at the chance to tear up this playground-level faulty analogy.

This issue is that some places in the south, New Orleans in particular, (and even here in Baltimore) are removing statues and monuments erected to pay tribute to Confederate soldiers and ideals.  Naturally, rednecks and racists are complaining about the loss of their “history.”  That brings us to this leap of logic: 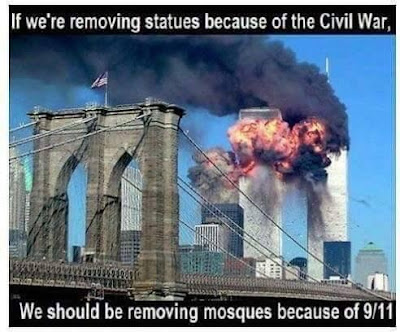 In the grade-school level mind of the meme generator and those who re-post it, mosques = statues.  If the statues come down, so should mosques, because 9/11.

Here is the salient difference: The statues and monuments pay tribute to the idea of the Confederacy; a group of states who seceded from the Union because they wanted to keep other human beings in unpaid servitude.

A mosque is where millions of people pray to a different God than the Christians do, in a different manner.  A mosque doesn’t inherently stand for the destruction of the twin towers, other than in the minds of racists who cannot tell the difference between individuals and institutions.

Sure, there may be mosques that preach revolution against the western dogs, but chances are, they’re located in the Middle East.  Removing mosques in the US serves no purpose but a twisted sense of vengeance.

But every one of those Confederate monuments supports the idea that it’s OK for a race of people to be subjugated.

The two examples are not remotely alike in form or function, which makes this an apples-to-oranges comparison and a ridiculous If/Then statement.

I’m also tired of the argument: “But they’re removing our history!”

History should be remembered and learned from.  It doesn’t necessarily have to be commemorated.

But then, tell that to the people who are still fighting the war.

Right throughout! Why not commemorate with statues of a Salem witch like Goodie Nurse or so-called anarchists, Sacco and Vanzetti,the warrior Tecumseh(when/if they find him) or Kitty Genovese on a sidewalk in New York.

We would be best served by doing the most obstructive things we can to those in power since a tiny, well placed thermonuclear device would probably do more damage than intended.
The civil war was all about the rights of some people to own other people. Culture other than that had nothing to do with it.