So how’s the weather lately?

Good God, it’s like Mother Nature is having a fit of projectile vomiting all over the south. Maybe it’s about time we figure out that it’s not such a good idea to pave over every living surface across cities that are at zero feet above sea level.

Mankind may not have control over nature, but we sure have influence. The effects of these storms wouldn’t be nearly as bad if we weren’t cutting every corner in sight just to put up a couple more condos. Why not shortchange barrier vegetation, overlook crumbling dams and pave over every square foot of waterfront real estate? Why let a few worry-wart hippies get in the way of development?

Look, I don’t believe that the existence of these two latest hurricanes constitutes proof of climate change. I do consider them two more pieces to add to the mountain-sized pile of evidence that climate change is happening and is contributed to by humans.

Just look how both of these storms were described.  Harvey was an unprecedented storm; with conditions never before seen in recorded history.  And then a week later, Irma becomes the strongest Atlantic hurricane ever recorded.

We’re breaking temperature records year after year after year and contrary to the common arguing point, they’re not just blips.  I’ve posted it before but it warrants reposting.  Check out this timeline, showing temperature variations going back to 20,000 BC. You’ll see slight wobbles that take hundreds, if not thousands of years to take place.

And then you get to the 1930s and 40s where temperatures start to rise noticeably and then BANG, they spike with the 80s and 90s.  There is no 50-year change like that EVER in prior ages.  Only a moron can conclude that humans haven’t had a hand in it.  Or, Republican politicians whose heads are so far up the Koch Brothers’ asses they have to look out their navels.

Take a look around, down in Florida. This is going to be the new normal. The big ones may not come every year, but they’ll come often enough to make it hurt. Where they land will be a crapshoot, but unless we change the way we develop our coastal areas, the results will be the same. The shit that doesn’t get blown down will get flooded out.

So keep disassembling the EPA. Keep cutting funds for NOAA and hurricane research. Continue to ignore our infrastructure and let the rich bastards siphon up all the tax cuts. Eventually, they won’t have any place left to moor their yachts.

Breaking It Down
Speaking of murderous clowns, I saw the movie “It” this weekend. I loved it. 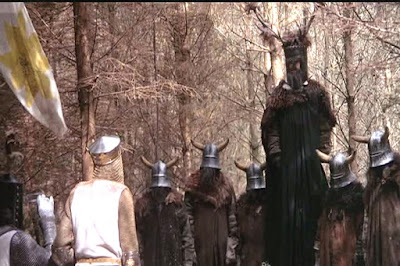 The Knights Who Say ‘Ni’ definitely should not see It.*

I was a fan of the book, way back when. And I even liked the 2-part TV movie from 1990, although the special effects are painful to watch today. (They used a lot of stop motion photography, which looks like it’s from the original King Kong movie.)

As you may remember, the story involves a group of seven kids coming together to fight a supernatural monster, who terrorizes the town by abducting and killing children. Twenty-seven years later, the same kids come back to town as grownups, to finish the job.

This movie limits the story to that of the kids (which will be followed by the inevitable sequel, to tell the rest of the story.)

What I liked best about the new movie was the interplay between the kids… you know… ragging each other, mother jokes, sister jokes, dick jokes, aggressive use of profanity… Just how I remember being 13!  It was believable and real. The child actors do an amazing job.

And while the clown bits were definitely nightmare inducing, it was the atrocities committed human to human that were the most disturbing. I don’t remember if it was in the book, or it was from an interview, but Stephen King once said that (and I’m paraphrasing from memory), kid’s lives take place just under the gaze of adults, like it’s a whole different world.  The grownups rarely see what’s really going on and are consequently of little help.

Kids just had to make do. Maybe that’s what I like about this story. It’s just kids taking their fates into their own hands and doing what desperately needs to be done.

*DVD Director’s Commentary: Just to explain the picture to the non-Monty Python fan, The Knights Who Say Ni should not see the movie “It” because “it” is the one word they cannot hear, as per “Monty Python and the Search for the Holy Grail.” Perhaps they could see it with the sound off. I just wouldn’t want to sit behind them.

Another Season Begins
Football season began for me last weekend with the opening game of my Steelers’ 2017 season. I went to my local sports bar for the festivities and it was nice to be back. Sweetpea has kept me well occupied lately, so I hadn’t been out to the bar for most of the summer.

The Steelers opened against the sad sack Browns, which should have been a walkover; like a 5th pre-season game. However, someone forgot to tell the Brownies, who battled a disorganized-looking Pittsburgh squad to a 21-18 loss.  We got the “W” but didn’t look very good doing it.

I just wonder if it was my fault.

See, last week, I decided to use my new window-facing office space for a little municipal smack talk, by pinning a Terrible Towel to the end of my desk, so that it is visible from the main road.

I thought of doing it last year, but the season had already started and I didn’t want to mess with the mojo. I figured if I posted it before the season starts, I’d be all right. And opening against the Browns made it seem like a good bet. I used my 6-Time Super Bowl Champions towel because I didn’t really have much choice. I have two others that are individual Super Bowl towels, which I have displayed at home, and I have my plain, unadorned “battle towel,” for use at games or watching at home.

Now, I’m not sure if it was a good idea. Maybe it was the towel mojo that clinched the win. OR, maybe the Steelers won despite the temptation of karmic smackdown. I’ll have to watch carefully in the coming weeks.

Anyway, I was hoping it would be a visually striking presentation, but I ended up receiving a lesson in “scale.” 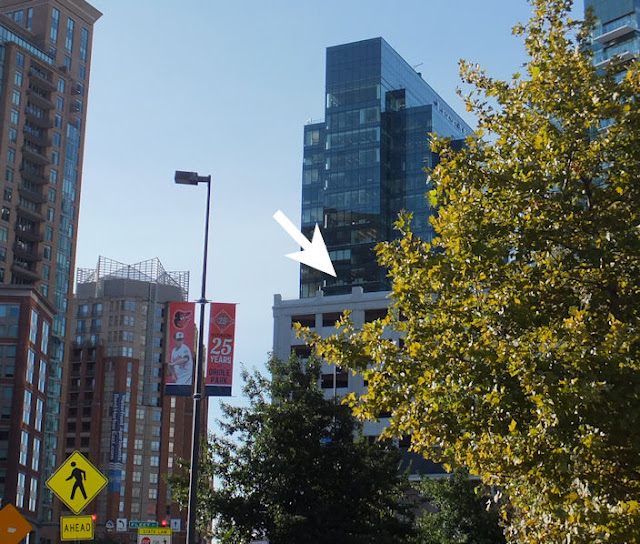 This is a shot of my building from a couple blocks away, from my walk in from the subway.  The arrow shows where the towel is.

OK, no one is going to see that from their cars, from that far out. 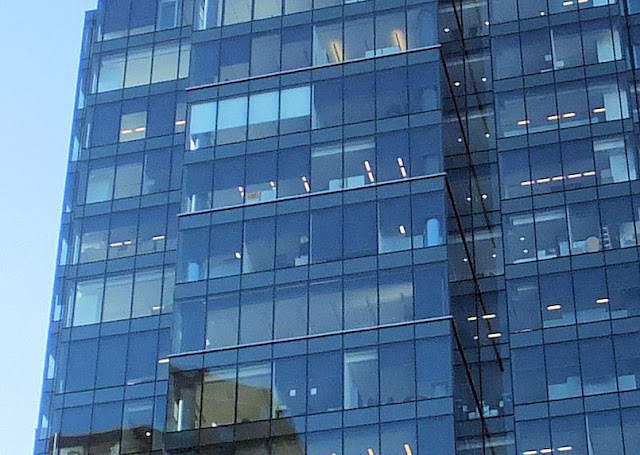 This shot is from across the street.

You can kind of see something up there, but it’s hard to tell.  Now if I just zoom in a bit… 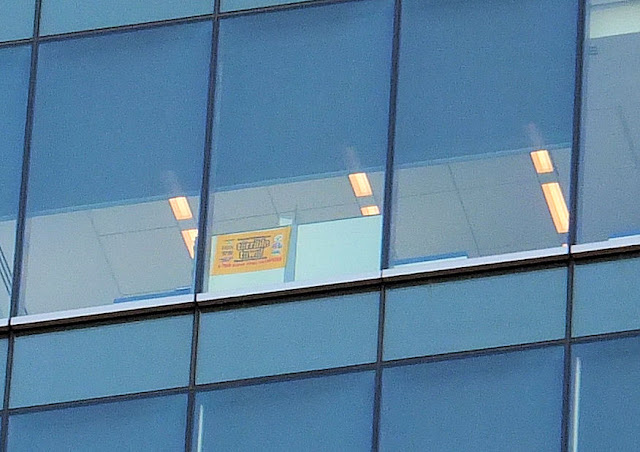 Maybe I’ll just have to settle for pissing off the people on upper floors of the Marriot and the condo across the street.

I'm just sad that you had to explain your Knights Who Say 'Ni' joke. I loved it.

I debated whether I should trust the joke or explain. I'm not sure who's visiting anymore, as you can see by the dearth of comments.

Ultimately, I decided to explain, but at the end of the segment, so the joke had a chance to land on its own.