President 45 has once again played this country like a symphony maestro.

Here we are again, on the precipice of losing insurance coverage for tens of millions, thanks to the newest ACA repeal bill Republicans are ramming through Congress. And what is everyone talking about this week? Football players taking a knee for the national anthem. 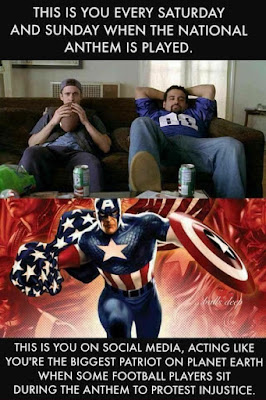 At a speech in Alabama, (where else?), he said that he’d like to see any player that knelt during the anthem get fired, and he referred to such a player as a son of a bitch. 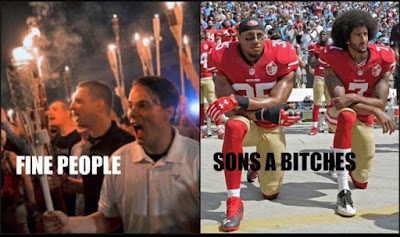 He knew full well he’d generate a response from the NFL, and the owners, players, and coaches didn’t disappoint. Most of the owners released statements supporting the players’ right to protest as they saw fit. Teams held team meetings to decide how they should handle this provocation.

Some teams linked arms along the sideline. Others had some players stand and some kneel, according to their respective consciences. Still others (including mine) stayed in the locker room during the anthem, so to stay united as a team and not to isolate any one player.

And as if on command, the nation’s self-appointed “Patriots” on duty, all lavishly swathed in red, white and blue, had a conniption fit.

As usual, much of it was factually untrue.

No, the NFL commissioner did not fine the Steeler players one million dollars apiece for failing to appear on the sidelines.

No, there is no passage in the NFL game rulebook addressing requirements for the national anthem. The article and section numbers cited in the graphic led to various other mundane points of gameplay. In fact, there isn’t a single line in the entire rulebook addressing the national anthem. (About 90 seconds worth of Google research debunked that meme.)

It’s also worth noting that players standing along the sidelines for the anthem is not exactly a longstanding tradition. It only began in 2009, after the US Dept. of Defense paid the NFL $7 million in taxpayer dollars to buy patriotic participation in the pregame ritual. Senator John McCain called it “Paid patriotism.”

Facebook “Patriots” seem to be in love with the Steelers’ left tackle, (and former 3-tour Army Ranger) who stood for the anthem alone at the mouth of the tunnel. This is ironic since I’d bet if you asked his new supporters a week ago about what they thought of Alejandro Villenueva, they’d say he should be deported with all the rest of the illegals. They wouldn’t say that to his face, of course, because Al goes about 6’9”, 320 lbs.

When I wrote about this last year, I pointed out the inherent disconnect of a group of people viciously “protecting” the virtue of our Free Country, while simultaneously denying people the very freedoms this country specifically and pointedly protects. 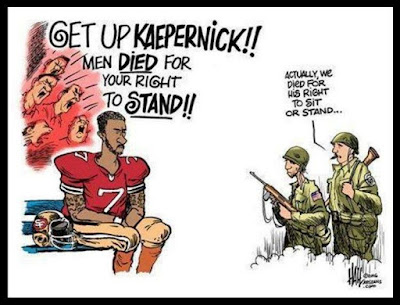 When Colin Kaepernick first protested, everyone made much of how privileged he was and how he (and other rich NFL players) had no legitimate reason to protest. (Empathy is not a quality that conservatives understand.)

And then back at the beginning of this month, NFL player Michael Bennett wrote about his shameful treatment at the hands of the Las Vegas police department, where he was thrown to the ground, cuffed so tightly his hands went numb and had a cop’s knee between his shoulder blades to the point that he couldn’t breathe.

The reason? Officially, someone thought there were gunshots somewhere. Unofficially? He was a big black man who looked like trouble.

This shit goes on every single day. In the old days, you never heard about it in the media. Now in the era of cell phone cameras and social media, we hear about some of it. We heard about this one only because the victim was of such a professional stature that he had a microphone through which he could publicize his story.

What’s going in the Take a Knee backlash is a philosophical bait and switch. These “Patriots” are uncomfortable with the charges of institutional racism at the root of the player protests, so they pivot to Soldiers and The Flag and This Great Country of Ours. On that, they can pontificate for days. 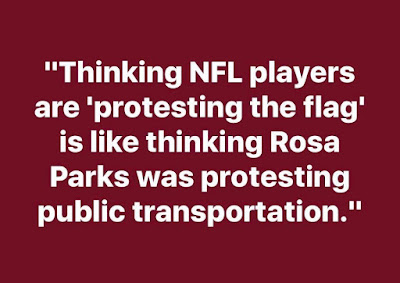 I understand… it’s easier to wrap yourself in the flag than to address the serious problems with the way this country polices itself. But that doesn’t make it right.

We always hear, “This is not the time,” and “That is not the way to protest.” But no one ever, EVER explains when it IS the time or what the “Patriot-approved” way to protest might be. But I’m pretty sure it involves staying in one’s house with the doors shut, the blinds closed and the phone off the hook. And make sure it’s not too loud so one doesn’t disturb the neighbors.

I don’t think for an instant that 45 didn’t want this weekend to transpire exactly the way it did.

Congress now has 6 days to pass an Obamacare repeal and the bill under consideration has been harshly criticized by everyone in the medical industry, from health care groups to patient advocacy groups to doctor and nurse lobbies, and even insurance groups themselves. The only supporters are the GOP congressmen and senators who have campaigned for years on how they’re going to repeal Obamacare, plus the fools who Fox “News” has conned into thinking that would be a good thing.

John McCain has come out against it. Murkowski and Collins are leaning against. Rand Paul and Ted Cruz have come out against it for not going far enough, although I suspect both will be reeled back in by the threat of the ACA remaining as is.

I’m sure the Republican leadership is throwing everything but the kitchen sink at Murkowski and Collins, from threats to massive projects for their states, in hopes of avoiding another vote that falls short.  The last thing they want is millions of constituents blowing up the phones to register their dismay at the prospect of this insurance travesty becoming law.

And next thing you know, with one speech, no one is talking about health care anymore. All we’re talking about is some athletes spending a minute and a half on one knee, which in real terms, doesn’t make one goddamn bit of difference in a single American’s life.

That, my friend, is a master manipulator, playing you like the latest version of Madden for Playstation. The longer he keeps everyone talking about NFL protests, the better his chances of taking Obama’s name off one more thing and calling it a “win.”

It is our patriotic duty to resist this faux drama and to pay attention to what is truly important.