Professional Wrestling has Nothing on Fox "News"

If you’ve read me for very long, you know I take a lot of shots at Fox “News.” Every one of them is deserved. They are not a news service at all; they are the media mouthpiece for the Republican party. Their only mission is to create and maintain a conservative voting bloc by any means necessary.

If a Democrat discovered a vaccine for cancer and offered it for free to the world, they would call him a Socialist and condemn him for undermining the free market. That’s how skewed a world vision they have. No Democrat has ever, nor will ever, take an action that merits their approval.

While they rarely come straight out and present bald-faced lies as news, they more often skew the context of news stories by slanting graphics or omitting mitigating facts or anything that would lessen the conservative outrage they are trying to whip up.

These tactics have been uncovered and parsed at various other sites. But up until recently, I didn’t know how “canned” their interview and debate segments were until I read this article by former Fox talking head, Tobin Smith.

If you have any friends or relatives who swear by the veracity of Fox “News,” you should click and read the article right now because it shows how every moment of every panel segment is carefully scripted so that the conservatives trounce the liberals in the most psychologically satisfying way.

It is the professional wrestling of the talking head genre, without a genuine moment to be seen.

Here’s how they do it…

They start with hand-picking the actors to play the liberal parts. The liberal panelist will always play to liberal stereotypes. They’ll be geeky, condescending, unattractive and usually a person of color or obvious ethnicity.

These actors will roll out the most strained liberal arguments… they’re practically straw men made flesh… AND, the entire argument will be provided to the conservative commentator in advance.

The faux-liberals will do their thing, guaranteed to raise the blood pressure of the target audience, who are, as Roger Ailes put it, white “men from age 55 to dead.” Then the last word goes to the conservative closer, who comes in and tears the liberal argument to shreds.

It is carefully directed to rile the conservative base and then flood them with “My team won” endorphins as their guy logs a convincing win using time-worn conservative talking points. It’s not at all different to the feeling of watching your favorite football team stage a comeback to best their biggest rival.

Every word of it is a psychological ploy, designed to play on the biases of their base. And now this isn’t just speculation, it’s a fact, coming from a former participant.

If so, where are the lawsuits? Smith’s article came out in May. If his disclosure was untrue, you’d expect them to sue. But the last thing they want is for their production techniques to become common knowledge. 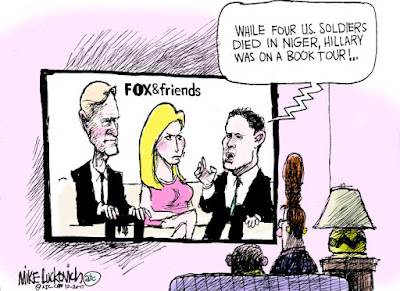 Smith also describes the rampant sexism that flows through the organization.

Granted, it’s not difficult to tell what their physical standards are for female on-air talent. They’re all gorgeous, long-haired (usually blonde) model-types. That’s not an accident.

But for former network head, Roger Ailes, that often wasn’t good enough. From the Smith column:

“Many times when I was on set Roger would call down from his 2nd-floor office packed with TV screens to tell female anchors during breaks (“I have a call for you from the Second Floor) to “tart it up — tits up and necklines down.

“For the non-endowed female anchors, this meant being required to wear an uplifting “water-bra” while on set to meet Roger’s idea of what a female host on Fox should look like.

“The older the hosts got, the bigger the water bra and the longer the hair/eyelash extensions got too.”

Is it any wonder that one female host after another filed sexual harassment or discrimination suits? 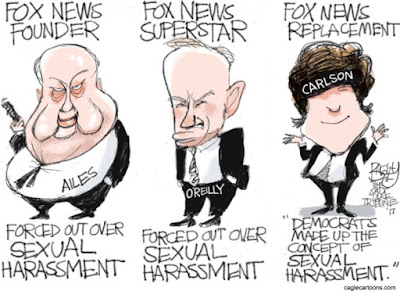 The choreography also extended to the hosted shows, like O’Reilly or Hannity. If you didn’t argue the points they wanted, in the way they wanted, you ceased to get call-backs. So when you think you’re seeing an impromptu interview or discussion, it’s already been informally scripted and agreed upon.

Red State Theater; that’s all it is.

I remember reading something about this by comedian Al Franken, back before he was Senator Al Franken. In his book “Lies and the Lying Liars Who Tell Them,” he talked about the Fox show “Hannity and Colmes.” This was supposed to be a point/counterpoint kind of show with a liberal (Colmes) and conservative (Hannity) battling out the day’s news.

Franken was often disturbed by the performance of Colmes, who never “won” and rarely brought up important, salient points to discredit Hannity.

One time, Franken met Colmes face to face and offered his assistance. He offered a couple of effective facts, counters, and debunkings for future use on Hannity’s assertions.

Colmes’s response?  “That's not the format of our show.”

Franken was like, “Why not, it’s your job to be the liberal, isn’t it?”

No, his job was to be the punching bag who lets Hannity say whatever he wants.

The last thing Fox “News” is going to allow is a liberal to make sense on their network. 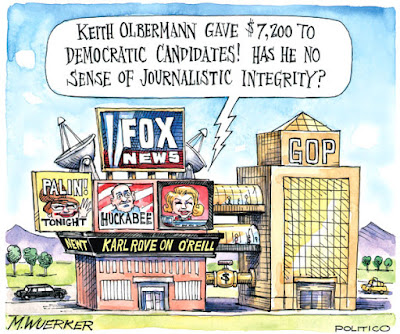 If Democrats are to make any progress in the upcoming elections, the effect of Fox “News” must be mitigated. There are vast segments of the country who get their news from Fox and only Fox. They’ve convinced their viewership that any news source that contradicts Fox is by definition, promoting fake news.

Most aren’t equipped to combat the onslaught of misinformation projected at them daily. They are psychologically outgunned by the master-level persuasion techniques wielded by Fox.

The only hope is that they’ll listen to one of their own… a guy for whom they used to cheer.

Scroll back up and click the link to the Tobin Smith column. Become familiar with the contents. Bookmark it if you can. Use it the next time that friend or relative tells you about something they heard on Fox.

Fox “News” is basically lying to every single one of its viewers. They are putting on a fake version of a live discussion panel show. They are to real news as professional wrestling is to Olympic wrestling; a scripted, truth-free imitation of a genuine product and Tobin Smith has proof.

I just figured everyone knew this. Well, those under the age of 55 to dead. I love when I'm surfing YouTube and I randomly get video recommendations of "Tucker Carlson SLAYS Idiot College Student" and it's like, wait, we're applauding a guy for out-debating a 19 year old kid?

Next up: Conor McGregor Beats the Shit out of 14 Year Old Fat Kid With Asthma.

and Fox News is why I get ALL the news from Al Franken, Stephen Colbert and John Oliver. Jon Stewart is my Truth Guru.
Even the ancients knew comedians told the truth. Tragedy was for stupid goats like Hannity, O'Reilly and Ailes.

I knew they never brought in the brightest stars in the liberal nation, but I didn't know the whole thing was stone cold faked.

That explains why the new tax plan and budget are such tragedies.

Thanks for giving specifics on something I always suspected.