Keep Your Hands to Yourself

“I said ‘Honey I’ll live with ya for the rest of mah life,’
She said ‘No huggy, no kissy ‘til you make me your wife.’
Oh honey, mah baby, don’t put my love up on no shelf.
She said, ‘Don’t hand me no lines and keep your hands to yourself.’”

Was no one paying attention to the Georgia Satellites back in 1986? It would have saved everyone so much aggravation. Or least listen to your mother…

“Now Harvey, don’t touch, and for Pete’s sake put that thing away. Nobody wants to see that…”

What we have going on in America is an epidemic of uncontrolled ego and power, manifesting itself in boorish and sometimes criminal behavior and it’s allllll coming to light.

The publicized cases seem to be the famously powerful… movie producers, politicians, directors, high-powered actors and comedians… and I’m sure it runs deeper than that, up to the not-so-famous men of business and industry.

If I were a powerful mogul with shenanigans like that in my past, I’d be trembling in my designer wingtips. That’s the thing with a movement like we’re seeing; the more that comes out, the more people are emboldened to tell their own stories.

People have always known about the Hollywood stories; I mean, we even know the term for it: The Casting Couch. Personally, I always thought that was a thing of the past; something relegated to the old movie studios of the 40s and 50s. Obviously, I was mistaken. A chorus of actresses is telling us that it’s still very much a “thing.”

To me, it’s telling to see how these stories play across the political landscape.

When the Weinstein stories started coming out, Fox “News” was all over it, to the point you thought the guy’s name was “Democratic Fundraiser Harvey Weinstein,” or “Hillary Clinton Donor Harvey Weinstein.” All the knives came out for the “Hollywood Elite,” which is dog-whistle for “no-good, uppity liberals.”

Then the Roy Moore story came out. Whole different story. 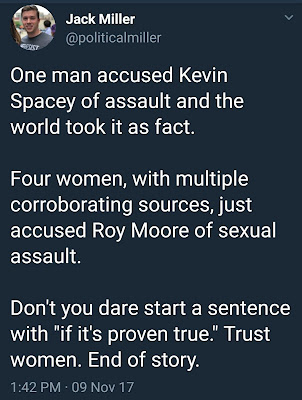 “If true,” huh? Yeah, that’s an important distinction, but only when a conservative white man is accused. Because, after all, the biggest tragedy of them all is one innocent white guy out a hundred guilty ones, getting punished.

Contrast that to the “law and order” death penalty advocates, where if one innocent black man is killed along with a hundred guilty ones, that’s just the cost of doing business, because he probably did something else no one knows about.

When a Democrat screws up, other Democrats boot him off the team.  Just ask Anthony Weiner. 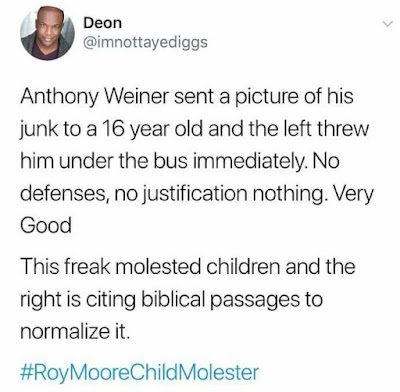 But just listen to the alibis for Roy Moore. They’re even trotting out biblical quotes to rationalize molesting a 14-year old girl. And then while they’re sharpening their knives for the victims, they incredulously ask why they didn’t come forward sooner?

Why do you think, Gomer? Because you and your Bible-thumping buddies are about to make their lives a living hell.

One more just came out today. A woman who, when she was a 16-year old waitress, let Moore (who was the local district attorney), give her a ride home from work and on the way, he felt her up and tried to force her head onto his crotch. Her story coming out is only possible by the existence of the first four stories.

Moore is most famous as the judge who insisted on posting the Ten Commandments on the courthouse walls and was removed from the bench for defying the Supreme Court on the matter.  I wonder which commandment says to sexually assault a minor.

What the hell is up with Alabama anyway? I saw an article that said they Roy Moore revelations made Alabama evangelical Christians 40% more likely to vote for him.

Alabama: Throwing off the learning curve since the 1800s. It’s the only state were molesting a minor makes a politician more relatable.

You know, every time you turn around, there’s another story about a woman who’s been murdered by her husband or boyfriend. Cops don’t even pretend to look for anyone else unless the significant other is on video elsewhere at the time of the crime. And even then, he probably hired someone to do it for him.

Between getting beaten, raped, killed, sexually assaulted, mentally abused, cat-called, black-balled, and paid seventy cents on the dollar, I don’t see how we even propagate the species anymore. If I were a woman, I wouldn’t want to be anywhere near men, let alone live with one.

It’s a testament to Woman’s limitless capacity for forgiveness and seeing the good in people that we Man can even find someone to tolerate him.

And speaking of tolerating lower lifeforms, Happy Birthday to Sweetpea. This man thanks his lucky stars every day that she puts up with him.

The support is killing me. Especially the biblical quotes. Come on, guys. How can this even be a political issue??

I know, right? Our political process is so divided and hardened, supporters will accept any atrocity committed by "their team," as long as it keeps the other team from winning. It becomes especially hypocritical when the "religious" overlooks their guys' explicit sins while excoriating their rivals for petty transgressions.

Every day more stories like this come out. I am glad women are speaking up because some of us, me in particular, didn't realize just how pervasive this kind of behavior is. I guess I am learning that it is everywhere. Waaay back when I turned 18 I knew that younger girls were totally off limits and that their daddies had the right to shoot me if I tried anything foolish. I never looked back.

Can the "Sexual Assault" mandates, workshops, aware-ness sessions. Let's call the police and arrest the clowns.
We can't mandate attitudes or assumptions of privilege. No amount of talk can erase the hurt, humiliation, mental and emotional turmoil these men cause.