With the current White House seeking to overturn pretty much everything Obama and the Democrats accomplished from 2009-2016, I wonder if this scenario is going to become the new normal. Obviously, if the Dems take Congress and the Presidency in 2020, the first things I’d expect them to do is reverse all 45’s reversals. I mean, there’s already a substantial hit list. 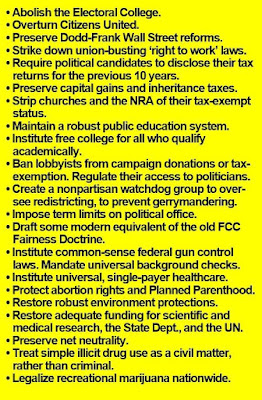 I saw this graphic on Facebook. I agree with just about all of it, although there are a few items with a snowball’s chance in hell of coming to pass:

·        Abolishing the Electoral College: Republicans will fight to the death to keep the mechanism that handed them their last two presidential “wins.”
·        Overturning Citizen’s United would take a new Supreme Court and the appropriate case to base on.
·        Strip churches and NRA of their tax-exempt status. Will never happen. They’ve been tax-exempt for too long, plus no one wants to campaign against churches. And the NRA? They don’t really have assets or profits; they’re a lobbying organization. They don’t sell anything but their souls and those of our nation’s children. But you can’t tax influence. Besides, they’d shoot anyone who came to collect.

The other stuff seems possible, given a filibuster-proof majority in Congress plus the presidency. But even then, it would be tough. The Democrats had exactly that in 2010 and it still took Herculean efforts to pass the ACA. The lobbyists for organizations with the most to lose would just move their targets to the other side of the aisle and buy off a new group of legislators.

But then what happens when the pendulum inevitably swings back the other way? Are we going to spend the rest of our lives enacting and reversing the same laws every four to eight years? At some point, there has to be an acceptance. But with our extreme political polarization and media voices bent on keeping it that way, I don’t see any change.

Even the abortion issue, which was settled more than 40 years ago, is still being litigated to the point where it’s harder to seek pregnancy termination now that it was right after Roe v Wade was decided.

We shouldn’t shrink from making the changes though. It’s up to Progressives to convince the rest of the nation that we are right and our opposition is wrong. We need to stand up for what we believe and back it proudly. 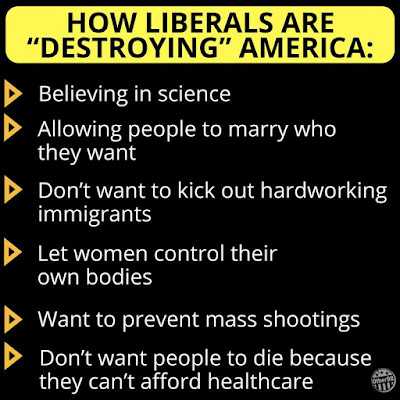 It’s not even a complicated case to defend:

·        Believing in science. Those that don’t are heavily influenced by big monied interests who are heavily invested in the status quo. In other words, the fossil fuel industry bends over backward to convince people that climate change is a hoax or outside mankind’s influence, despite overwhelming scientific evidence to the contrary. All because their profits would dip if they had to do something about it.

The sister-case is the public’s over-estimation of junk they read online vs the word of those who actually know the subject, like the anti-vaxxers. The whole anti-vaccination mess stems from one faulty study, whose author retracted it in the face of scientific contradiction. Yet people still site the study when endangering their kids and community by withholding vaccinations.

·        Allowing people to marry who they want. No one has ever shown damages from same-sex marriages to the community at large. In this country, persons A and B need not tap dance to the religious standards of person C, unless there is a tangible threat to the community. Same-sex marriage has been legal in various states for years. Where’s the harm, anywhere?

·        Don’t want to kick out hardworking immigrants. This always was and ever shall be a country of immigrants. The unheralded result of this administration’s war on ferners is that, without immigrants, this country grinds to a halt. Crops are already rotting in the fields for lack of people to harvest them. Unless you want to start paying $25 for a salad, we better address that.

·        Let women control their own bodies. I’m not a woman, but if I were, I’d be off-the-charts militant toward anyone who thought their opinion of what I could do with my body held a millisecond’s worth of value. And yet, here we find one group after another trying to pass laws to govern the most personal of decisions a human can make. The fact that these are people who believe in less government influence on our lives is the hypocritical cherry on top of the whole presumptuous sundae. It goes to show that their other tenet, the freedom of religion, is limited to their own interpretation of their own religion… that they want everyone else to live by.

·        Want to prevent mass shootings. The bodies pile up and we do nothing because the organization who represents gun sellers doesn’t want to lose profits. So they use disinformation and misrepresentation to convince people their rights are being eroded by enacting background checks or bans on military-grade weapons. Meanwhile, they have complete control of one half of the political spectrum, to ensure that nothing that can hurt gun sales is put into law.

·        Don’t want people to die because they can’t afford health care. We were already a leg up on this problem before Republicans dragged us back down. Again, it’s a money thing. Rich companies don’t want to spend any more than the bare minimum on their employee’s health insurance. Or in the case of the Koch brother industries, they don’t want to pay any of it. Their bottom line is more important than the health of their employees, OR any other citizens living near their pollution-spewing mining, drilling, and refinery sites.

Our healthcare system is a laughing stock compared to that of every other first world country. Higher cost paired with lesser care. We need to move to single-payer and scrap the whole, wasteful system. But expect the established medical and pharmacological networks to resist.

Let’s look at some other conservative disinformation: 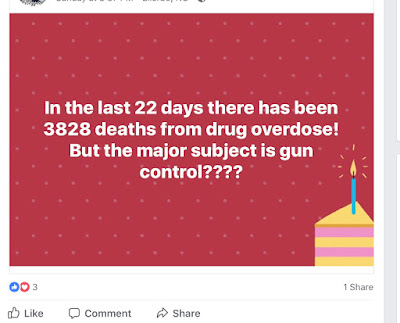 Classic misdirection. The two subjects have few similarities, too few to make a valid comparison. The most glaring of which is that these 3828 overdose deaths, (if that’s even correct; it’s completely unsubstantiated) are people harming themselves, inadvertently or otherwise. A person has 100% control over whether they get into opiates. Plus, the deaths are one at a time, case by case, with an infinite amount of variations.

The gun issue is simple… it is a few misguided people killing large numbers of other people and a very short amount of time. And if you remove a single element or two from the equation, (semi-automatic rifles and high capacity magazines), the issue (mass shootings) almost disappears. So why would you not address gun control? (Aside from not wanting to cost the gun industry any money.)

Obviously there is work to be done to decrease the number of deaths due to opioids, but where is it written that the public can’t consider more than one issue at a time. Life does not come in a binary manner. We deal with multiple things going on every day. This meme (or simple status update, created to be forwarded ad nauseum) is designed to get attention away from dealing with guns, and onto something… anything else. “Hey, look over there! What about that?” 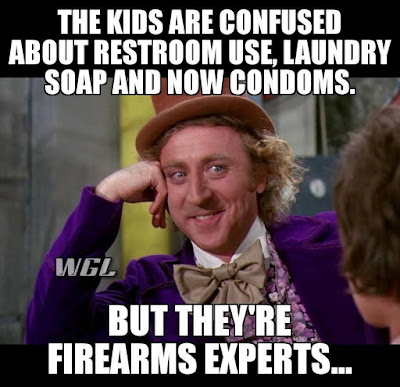 Simple meme for simple minds. Apparently, there may be some kids in the country who do dumb stuff. So, the authors use the image of those dumbasses to take down the character and knowledge of a different group of students who survived a mass murder and are working to prevent another one from happening.

The thing is, you don’t have to be an expert in firearms to know that a gun that shoots 17 bullets per second doesn’t belong in the hands of the general public. And as soon as someone can provide a rational reason for the private ownership of semi-automatic weapons, I might reconsider. But as yet, I haven’t heard a single reason that doesn’t portray either lunacy or the simple rationale of, “But I want one…”

And for the love of all that is holy, can we please retire the cutey-pie Willie Wonka memes? Gene Wilder would be rolling over in his grave if he saw his image being used over and over again for simplistic bullshit like this. 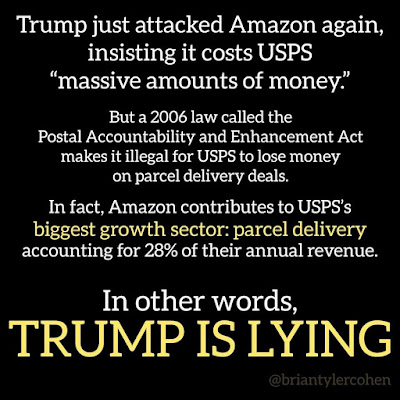 Now, this is a graphic that holds up. I only include it here to show how casually this president lies to us. Every time he tweets about Amazon costing the post office money, he is lying.

And the reason he’s lying is that because Amazon’s owner, Jeff Bezos, also owns the Washington Post, who has been the standard bearer in shining light on what the Trumpsters are up to. He knows that whenever he tweets negatively about Amazon, their stock takes a hit. So, he’s really just screwing with the guy to cost him money. And it wouldn’t surprise me that at the same time, he’s having his minions buy up as much stock as they can at the lowered price. Then once he stops harping on the subject, the stock corrects itself and everyone who bought the stock at the lowered price cashes in.

Praise this blog and pass the ammunition.

Sure, just as long as it doesn't come in a 50-round clip!