I saw an article in the news from Mississippi, where an obituary has gone viral.  In it, the deceased’s daughter wrote a funny, and very true-to-life homage to her father.  Typical of the write-up:

“His signature every day look was all his: a plain pocketed T-shirt designed by the fashion house Fruit of the Loom, his black-label elastic waist shorts worn above the navel and sold exclusively at the Sam's on Highway 49, and a pair of old school Wallabees."

I thought this was a fantastic idea.  When was the last time you laughed at an obituary?  I know if it’s me that’s being written about, I don’t want a bunch of wailing and moaning.  (OK, maybe a little.)  But I’d much rather provide one last chuckle, or maybe a guffaw or two.  If I get someone to blow their coffee out their nose, I win.  So I took the opportunity to write my own obit, which you will find below.

The funny thing is that this isn't the first time I've written my own obituary.  In college, I took a class on Death and Dying, where doing our obituary was an assignment, along with determining what we’d want on our headstones.  (I would go look for the old notebook it’s written in, but that sounds like a lot of work.)

So without further ado, may I present my mock obituary…

Local town crank known as “bluzdude” died last weekend, of acute heart failure.  He was 86.  In retrospect, he probably should have seen a doctor, instead of relying the healing powers of his favorite Pittsburgh Steelers game jersey.  His last words were reported as, “Gaah!  I should have worn a Mario jersey. Let’s go Pens.”

He is survived by “Pinky,” who after putting up with his nonsense for the last 41 years, is finally able to take the posters down off the walls.  The ball caps are reportedly coming down as well. 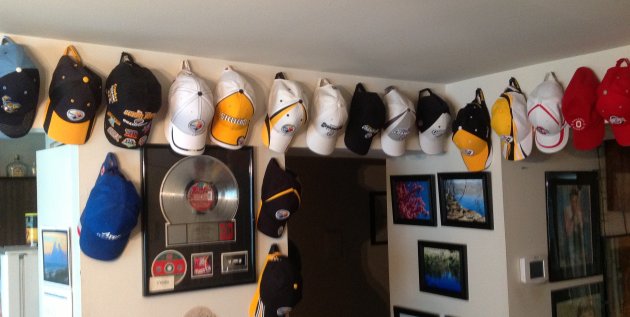 Born in Pittsburgh, he was so painful to look at that upon delivery, the doctor slapped his mother (who promptly smacked him upside the head with her wooden spoon).  After leaving the family nest, he was kicked out of several other Midwestern cities before finally settling in Baltimore.

He took great pleasure at tormenting the local Ravens, or “Ratbirds” fans, as he called them.  He became quite wary, in his later years, fearful that one of them might slip a little something into his bacon double cheeseburger.

Before finding a meaningful career in Baltimore, Mr. Dude had a checkered past, meaning he wasn't smart enough to beat anyone at chess.  He worked for a record store chain, which eventually became obsolete.  He worked for another music store, which closed within 2 years.  He then went to work for a craft store, that soon filed Chapter 11.

Upon moving to Baltimore, he found job with a mortgage company, which also filed for bankruptcy.  Realizing he might just be jinxing everyone for whom he worked, he decided to seek the stability of a Fortune 100 financial company.  His strategy proved unsuccessful, as in 2008, that company had to receive TARP bailout money from the government.

He spent his later years being paid to stay out of the workforce.

He requested that his body be donated for research, although he took care to specify it wasn't to take effect until after his passing.  But at this moment, his liver is being used as a briquette by the 2048 Summer Olympic Games, to keep the torch lit.  Firetrucks have been on call 24/7, to ensure the subsequent inferno is kept under control.

In lieu of flowers, donations to the Carpetbagger Religio-Political Think Tank are encouraged, as well as the Cassie Foundation for Mothering Awesomeness and the Jessica Training House for Southern Belles.

Director’s DVD Commentary: I realize that it could be considered bad luck to write about such things, but I am the type to “whistle past the graveyard.”  I cope by calling out exactly what I don’t want to happen.  Besides, I’m wearing my lucky Pens jersey.  What could go wrong?
Posted by bluzdude at 10:50 AM