Today, the Supreme Court found for the defendant in the Colorado case of the gay couple suing the cakemaker for refusing to make their wedding cake, based on his religious beliefs about gay marriage.

I can’t say I’m surprised that this court found for the defendant. What surprises me was that it was 7-2. Only Sotomayor and the Notorious RBG found for the plaintiffs.

The only bright side is that they found “narrowly,” so that the decision is not meant to be used to broadly roll back recently won gay rights. The way I understand it, the theory is that cake making is an “art,” and therefore free speech, in which the defendant must be free to “speak” for himself.

Personally, I think it’s crap. If you make cakes, you sell to whoever walks in your door, period. That’s how a free society has to work. Part of being a grown-up and having a job is having to do things you don’t necessarily want to do, in exchange for money.  Taking your own interpretation of what a 2000-year-old, frequently retranslated and re-edited book says about an invisible man in the sky and his formerly dead son, and putting it ahead of another person’s right to conduct business or simply function within society, is ludicrous.

But the court muddied the water a great deal, didn’t they? Now, every Bible-thumping fundie can try to wrap his anti-gay prejudice with Scripture and seek protection after refusing service to potential paying customers. Hence the cherry-picking of the Bible continues.

I have to give the original suit-filers credit though. If I were in their position, I’d have left that cake shop and told them to stuff their pipettes up their asses. But these guys were thinking of the bigger picture and how they might try to prevent such indignities from being thrust on others.

It will be interesting to watch the fallout from this one.

Flood of Attention
On one hand, it’s good to see Baltimore make the news for something besides riots, violent crime police corruption and STDs. On the other hand, the flooding of Ellicott City last weekend was a different kind of devastating. Although it was not so different from that “1000-year Flood” merely 2 years earlier. 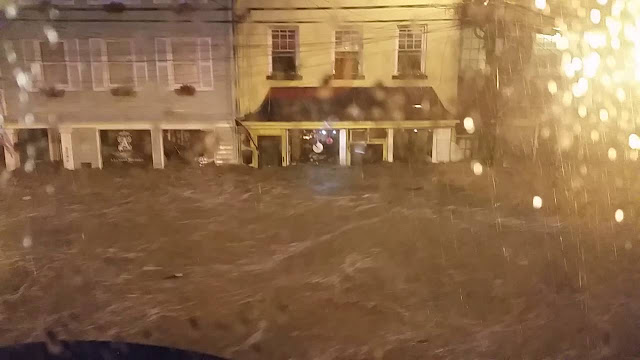 Ellicott City is a cute little former mill town just west of Baltimore. Its Main Street is loaded with quaint shops, cafes, eateries, and whatnot. Main St. is carved out of the hillside and the whole community is surrounded by rivers and streams.

It used to be that when there was unusually heavy rain, the town would slowly flood from the bottom, up. But in recent years, there has been a considerable amount of real estate development in the upper hillside, with housing and apartment complexes appearing where there use to be grass and trees.

And now, with nowhere for the water to go, it all runs down Main St, which acts as a large funnel. 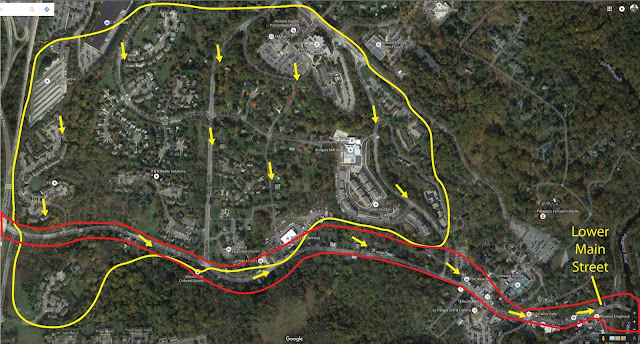 When the storm hit last week, the water running down the street was deep enough to reach the tops of door frames, and it was powerful enough to toss cars like they were matchbox toys. 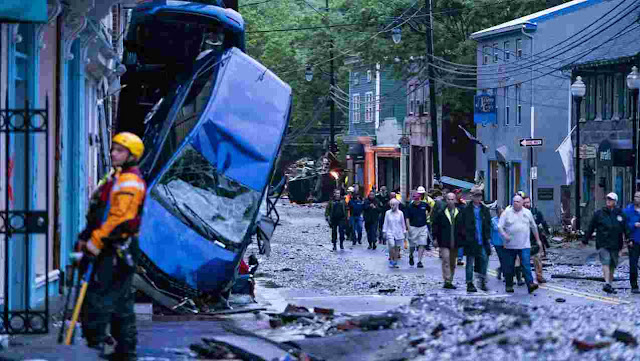 The big question now is whether the former business owners and residents along Main St. are going to rebuild.

I know what my answer would be if I were in their position: “Oh, HELL no.”

The thing is, nothing is expected to change about the conditions that created the flooding. There are possible fixes, but they will cost over $60-70 million dollars and take more than 10 years to complete. (Think a series of runoff ponds, and pipes dug under the town.)

When a similar flood hit in 2016, it was just as devastating. Many businesses rebuilt and had just reopened this spring. Now, they’re wiped away again, and there’s nothing keeping it from happening again and again and again. Weather is growing more volatile by the year. What we’re seeing now is the new normal.

I hate to be a pessimist about this poor, beleaguered town because I truly enjoyed visiting. It was a really cool area to walk around, check out some unique shops and have a drink or two on a nice night. But unless something is done about all the “impervious” structures built in place of natural, absorbent terrain, there is no end in sight.

You know, over the last ten or so years, there was a program developed to help mitigate this kind of thing (as required by federal law). There was a tax put in place to levy charges based on the amount of water-impervious square-footage one had on his property. Money was to go for projects to handle water runoff and land erosion.

But because it was a tax, Maryland Republicans jumped all over it, calling it the “Rain Tax.” Sure, it completely missed the point, but it was an effective buzzword that got people’s attention. The current governor ran on repealing it.

That played well with wealthy developers and landowners, as well as Joe Sixpack, who bought the GOP’s mischaracterizations that he now needed to pay a tax on the rain.

But it’s no laughing matter now, is it, as we wonder if there will ever be money to put Ellicott City back on the map?
Posted by bluzdude at 6:23 PM