The Kavanaugh SCOTUS nomination just got a whole lot more interesting, with the news that his party-rape-attempt accuser unveiled herself. No longer an easily-dismissed accusation from over 30 years ago, there is now a name, a face, and a lot of uncomfortable details to digest.

In a nutshell, California psychology professor Christine Ford says that when she was 15, she was at a party where a blind-drunk Kavanaugh (and another guy) dragged her into a bedroom, held her down, clamped his hand over her mouth when she tried to scream and tried to remove her outer clothing and bathing suit. She estimates they were 17 at the time.

At one point, the “other dude” jumped on the pile and knocked them all to the floor, which gave her the chance to get out of the room and lock herself in the bathroom, until the boys went away.

Now, when I first heard that there were high school-era accusations, my first thought was that I know I’d hate to be judged, in my 50s, by what I did in my teens.

HOWEVER.  Even at 17, I sure-enough knew not to pin girls down and try to rip their clothes off (and whatever else he had a mind to do next). Even drunk, even young, even desperate and hormone-fueled, decent people know right from wrong. This isn’t even close. There is no equivocation; this is wrong.

First of all, if true, this should be a disqualifier for a Supreme Court nominee. Second of all, of course it’s true. Do you think this woman came out in public lightly? Do you think she’s looking forward to the fun of a Congressional hearing about the most traumatic episode of her life? Of course not. No one does this for fun, fame or riches. She only went public because her identity was leaking anyway, and reporters were showing up to her home and classroom.

Her attorney said, “She is willing to cooperate. What she's not willing to do is to be part of this bloodletting that happens in Washington."

She knows she risks becoming the next Anita Hill; who remains a cultural punchline to every joke about pubes in the workplace.

The Republicans are already gearing up to make her testimony as grueling as possible. They already know she has a believable story, because:

They better tread carefully. The shit that flew during the Anita Hill testimony won’t fly now and they’ll come off like misogynist bullies.

Not that they care though… nothing is more important to GOP leadership than getting a hard-right conservative on the Supreme Court. That’s the whole reason they still support Trump, (now that they have their tax cuts in hand). They need one more of their guys on the bench to make sure their next legislative scams; voting ID laws, gerrymandering, limiting or overturning Roe, stripping environmental and banking regulations, ensuring dark money flows freely to campaigns… all see the final action of being upheld in the highest court. 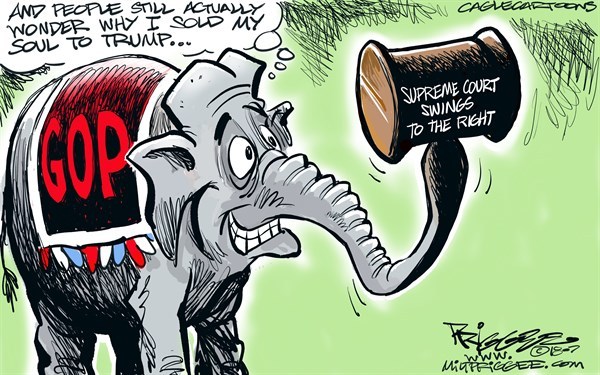 Ford’s testimony must be compelling if anything is to change. Merely being inconvenient will not move Republicans off this guy. They literally cannot be shamed. They stood fast amid near-universal condemnation when stonewalling the Garland nomination, knowing the result, (another conservative justice rather than a moderate or liberal) would cement their political domination.

Kavanaugh is already running with the Republican playbook, by denying everything. Just this weekend, I read in Woodward’s book that Trump, himself, counseled a colleague, “When faced with accusations from other women, just deny, deny, deny. Never admit anything. Kavanaugh is a quick study.

Right-wing media is already going nuts about this being a “hit-job,” and arising with suspicious timing.

Timing? Let’s talk about timing. They are trying to ram this nomination through, withholding requested documents, limiting hearing times, accelerating the process, for the sole reason of getting him confirmed before the November elections. There are two reasons for this:

·        So they can campaign to their base about packing the court with their guys,
·        In case they lose control of the Senate and risk the Democrats doing exactly what the Republicans did to the Garland nomination.

I don’t think they care what we unwashed masses think, especially not Democrats. If this runaway train is to be derailed, it will only come from fear of losing elections. That means Republicans will have to make their views known that they will not tolerate an attempted rapist getting a lifetime appointment to a position that literally drives the direction of their lives.

But considering the people the GOP already supported, a statutory rapist in Alabama, a pussy-grabber and serial cheater in the White House, I’m not optimistic.

Power trumps morality in the conservative world. Morality only a club used to criticize others.
Posted by bluzdude at 6:31 PM