Last week, we heard about the racist dog-whistle that the Republican nominee for governor of Florida blew while running against an African-American opponent, when he told a crowd that they couldn’t afford to elect the other guy because he’d “monkey it up.”

I can’t even call it a dog-whistle. That was blatant. Naturally, he claimed that it was just an old expression, but there is no one in his generation or any to follow, who is not aware that any reference combining a black person and a monkey or ape is highly offensive by default, and steer way clear. Hell, Howard Cosell almost lost his career 35 years ago over the same thing and that was an accident. (It was a phrase he’d used on mic in the past, referring to both black and white players.)

With this particular door now swinging wide open, this weekend saw an escalation of blatant racism in politics. In both Iowa and Florida, residents began receiving racist robo-calls espousing principles of white power.

In Iowa, the calls were about deporting all the “invaders from Mexico,” and declaring that America should be white-only. 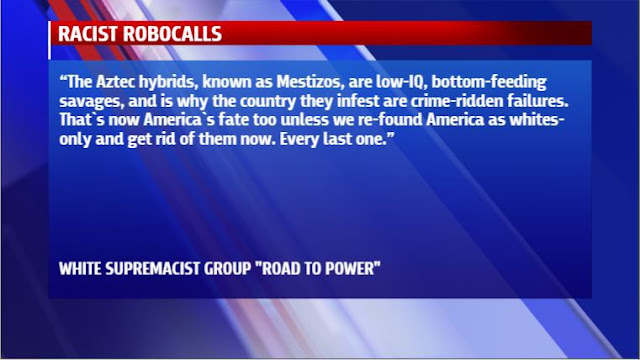 In Florida, the calls consisted of a caricature of a black dialect, complete with jungle noises, about how if they vote for the Democratic nominee, among other things, he’d make sure that no more black people go to jail.

When I heard about both of these calls, my first thought was that they couldn’t have come from the Republican nominee or official Republican establishment. There’s no way they are that stupid that they would allow something so blatant. Even if, down deep, they agreed with the content and intent, they’d know that it would eventually be linked back to the source, which could not be allowed to be them.

I thought it sounded like the work of the Russian instigators because this is exactly what they do… drop firebombs into the culture and then fan the flames.

Eventually, I found where the source was identified, right off the bat, to some Nazi, white-supremacist group in Idaho, who runs a blog.

If the GOP is smart, they’ll try to rein these guys in. If these kinds of calls continue, there are a lot of people who won’t bother to find the source; they’ll just assume it’s the work of the new Republican party. 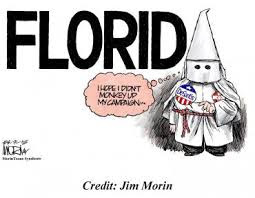 Or, maybe they’ll soft-pedal their opposition because deep down, they believe that white America is genuinely racist, and count on white fear to turn out in November. I guess it remains to be seen.

It could still be the Russians though. Maybe this is how they’re going to work this election year… by backing and funding others. Maybe they had access to phone lists from Iowa or Florida, or the technical capability to conduct a robo-call campaign. I have no idea how sophisticated the Idaho people are. I know if THIS blog ever wanted to conduct a massive phone campaign, I’d have no idea where to even start.

I’m calling it here… don’t be surprised if these calls get somehow tied back to the Russians.

That said, Happy Labor Day, and happy birthday to Bluz Sister, who turns… um… another year older on Tuesday.
Posted by bluzdude at 3:49 PM

It isn't even subtle racism anymore. If Bluz Sister is even just barely old enough to vote, encourage her to go and do the right thing.

Oh, she'll vote all right... A team of wild horses couldn't keep her away from the voting booth.