So What Else is New?

With the Kavanaugh circus still in town (and adding more showtimes as we speak), I think it’s time to ramble through some other stuff that I’ve been sitting on for a while. Personal stuff… It’s been a couple months since I’ve “checked in” with you.

But first, let me take a minute to jump on this drug ad billboard I see at my subway stop every morning. 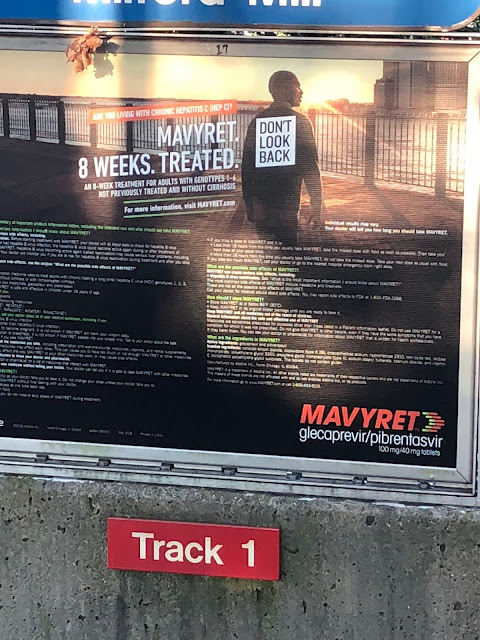 Couple of things at play here:
1.      What the @#$% is this supposed to treat? There’s all that information, typed in great detail, and you can’t read a freakin’ word of it. The billboard is across the train tracks from the platform, so it’s not like you can walk up close and get a better look. The disorder is right at the top and I couldn’t make it out until I took the picture and blew it up. And then there’s all the disclaimers! Who knows what it says in there? It could say in plain English: “This will cause monkeys to fly out of your butt,” but you’d never know unless you showed up on the platform with binoculars.

Apparently, this drug is for “Genotypes 1-6, not previously treated and without cirrhosis.” What the hell does that even mean? Genotypes of what? Best I can figure, it’s liver disorder, based on the cirrhosis mention. Who knows? But is that really the type of thing you need a billboard to advertise?

2.      The name… “Mavyret.” At first glance, I thought it was NavyVet, like it was for crusty old sailors. Who the eff came up with “Mavyret”?” They didn’t even focus-group this one. It’s like they needed a fresh name, so they pulled some Scrabble tiles out of the bag and went with that. Can’t argue with a 15-point score… 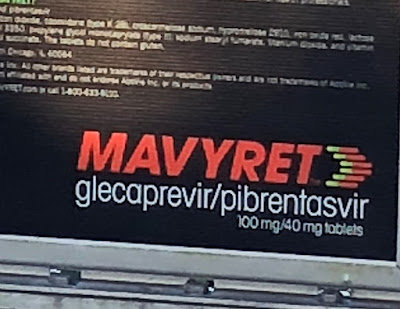 Also, what’s with the non-advertising name? “Glecaprevir/pibrentasvir. More Scrabble tiles; either that or it was named in honor of the Russian pairs ice skating champions.

It’s like they’re not even trying anymore. Anyway, that’s enough of that…

Going Yard
It’s been a couple months since I moved in with Sweetpea and it was clear right away that we had way too much stuff to keep; not to mention the duplicates. So all along, we planned to have a yard sale. We had it pegged for September 8th. Sweetpea went up and down the street, trying to get others to put stuff out as well so we could advertise a Neighborhood yard sale.

A lot of people liked the idea, though not so much that they would commit to actually doing anything. A lot of other people were more than happy to give us their crap to sell for them. (NOT part of the deal.) Then the few people that did commit promptly backed out a few days later.

We put up the signs, I put an ad on Craigslist, and we hoped for the best.

Naturally, by the time the big day rolled around, the weather forecast was for rain most of the day. We were stuck because our subsequent weekends were already booked up with various activities, and we already had all the stuff staged for moving outside. We had to go through with it rain or shine, regardless of what the neighbors did. We started moving the stuff outside around 7:00 and were ready, as advertised, by 8:00. 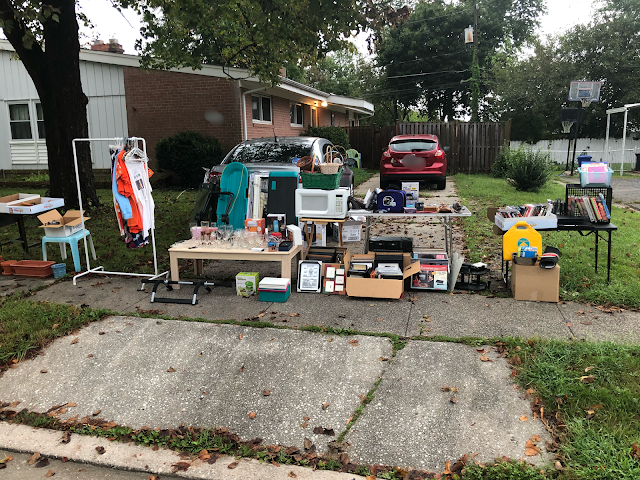 About 15 seconds after I placed the last item, it started to rain. Because of course it did. Because we’d planned for it, we had a tarp and a couple of plastic tablecloths we used to cover all the porous items, which was most everything. 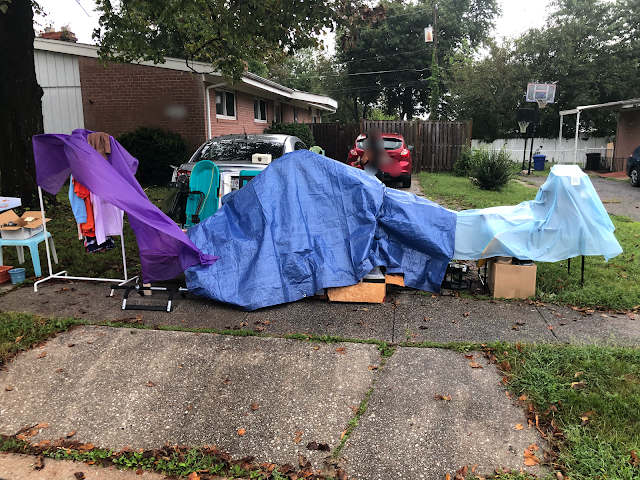 After an hour or so, the rain let up. I didn’t see any more “green” on the weather radar, so we uncovered all our wares and dried off everything that had gotten wet.

Ten minutes later, the rain began again, even harder than before.

Although it was funny, even around all the covering and uncovering, people were driving by and checking out our stuff. We sold some of our “big ticket” items that way, like my 5-speaker home theater system and her karaoke machine.

Hour and a half later, the rain stopped again and we went back to it.

We never did get many “destination” shoppers; mostly it was just people from the neighborhood who happened by. We ended up doing OK, selling a lot of our larger items... We sold a number of things that we almost didn’t put out because we didn’t think anyone would possibly want them. You never really know what someone else thinks of your junk until you put it out there.

It started raining again around 1:00, which is when we planned to wrap up anyway, so we shut it down. By that time, we’d cleared about $150, which we felt pretty good about, considering how miserable the weather was. We may take another shot at it this fall. But this time, no signs go up until I see a weather report.

Crossroads
Earlier in August, we took a long weekend to visit Sweetpea’s brother and sister-in-law, on the Delaware coast. They live in a community that’s literally being built around them and the thing that got me was the street naming. This is an intersection just down the block: 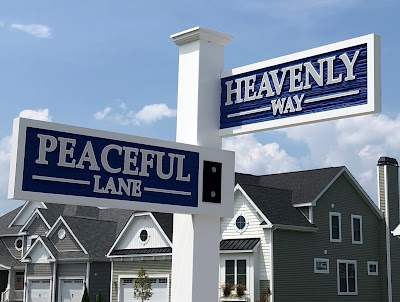 Are you kidding me? They also had “Serenity Lane” further down the block.

I don’t think that’s the neighborhood for me. I mean, find me the intersection of Heathen Place and the Highway to Hell. Or at least this place: 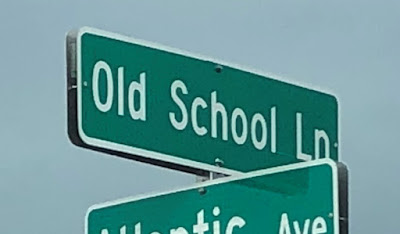 And that “old school” is the School of Rock!

Game On, Game Over
I was pretty excited for the football season to start. My Steelers opened against the Brownies so I headed down to my local sports bar to watch the game. My game was opposite the Ravens game so I had no choice if I wanted to see it. Of course, I’ve been going there for the games even when the Steelers game is on local TV, just because it’s been fun. Hell, if I hadn’t been out to watch a game that was on TV, I never would have met Sweetpea!

Anyway, my favorite waitress met me at the door with a distraught look in her eyes and told me that the owner was no longer getting the NFL Sunday Ticket package, meaning no more out of town games. Because they did offer a 1-week trial period, she did have my game teed up for Week One, but it would be the last.

At least I didn’t have to scramble that day, but I was seriously pissed! They could have at least put something on their Facebook page, to keep people from wasting their time looking for football. The official line was that it had become too expensive, but I also know that the owner is a Fox “News” conservative and was aggressively unhappy about the Nike/Anthem-Kneeling thing and had been threatening to give up the Sunday Ticket all last year.

I couldn’t help but take it personally. I was like, “Fine, your bar, your rules, but you won’t see MY ass in here on Sundays again. I’ll find someone who will take my money.” (Not that I could tell him directly; he picked that time period to go on vacation.)

The Steelers are playing tonight on Monday Night Football, so yesterday, Sweetpea and I checked out our next best option. There’s a Chinese restaurant about two blocks from our house and it contains a huge bar with scores of TV sets, which include the NFL package. We’ve been getting take-out from them for ages, so I knew the food was good.

We got there about 15 minutes before kickoff and there was plenty of places to sit around the massive bar. But it was clear that this was not anything like the place we used to go. My old bar was in an old predominantly Jewish neighborhood. On football afternoons, it was a pretty mixed crowd; mixed races, mixed ages (although predominantly 40+).

Our new place? Might as well just call it the Dexter Lake Club. Out of 50-60 bar patrons, Sweetpea and I were literally the only white people. 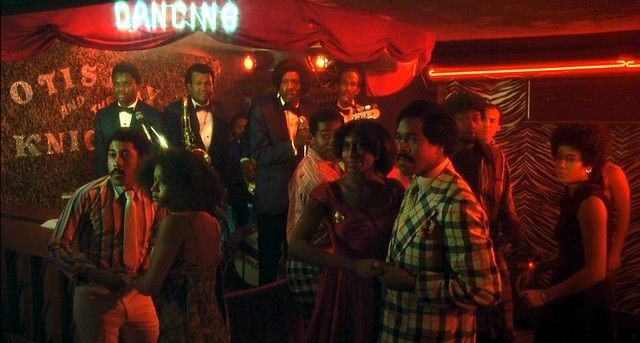 That’s why I wanted to do a test run when the Steelers weren’t playing. I wanted to be able to bug out if it got uncomfortable. I showed up wearing my Steelers cap and a Nike t-shirt just so there would be no confusion as to where my sympathies lie.

Didn’t really matter though… we had a great time. I’ll definitely go there again. It wasn’t much different than when I ride the Baltimore subway. Probably the same number of drunks there, too.

No one really paid us much mind other than those we were sitting directly beside. It was kind of weird though, sitting at a sports bar and watching all the orders of Chinese food rolling by. They also had the usual bar food, but most people went Chinese. It all looked good to me.

So, I expect that will be my new hangout for when my boys aren’t on local TV. I’ll let you know if anything noteworthy happens. Who knows, I may be the inadvertent key to racial harmony in this town. 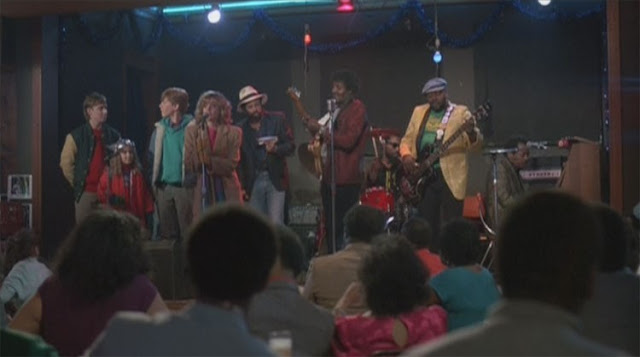 “Nobody leaves this place without singin’ the blues!” (Adventures in Babysitting, 1987)

Heathen land crossing with high way to hell made me lose my coffee!

Them my work here is complete!