Just when you think the current White House occupant couldn’t have any less human decency, he botches what should have been a slam-dunk denunciation of a somewhat hostile foreign country.

Last week, it came out that Washington Post columnist Jamal Khashoggi was lured into the Saudi consulate in Turkey, whereupon he was accosted by 15 members of a Saudi “hit squad,” was tortured, killed and dismembered. Turkey says they have an audio recording of the entire gruesome incident. Photographs of this Saudi posse show several people with direct connections (members of his security detail) to the Saudi Crown Prince Mohammed bin Salman, aka MBS.

The story from the Saudis has been mutating ever since. First, they didn’t do it and didn’t know anything about it. As Turkey began to leak details from their recordings, the Saudi story evolved. OK, he was there, but we don’t know what happened. Then he was killed, but we don’t know how. He was accidentally killed at our embassy, but MBS didn’t know anything about it. Their most recent story is that he was “killed as a result of a fistfight” at the embassy.

Yes, a middle-aged writer picks a fight with 15 guys who have knives and a bone saw. Happens every day.

At each mutation, Trump said he believed the Saudis, and his first instinct was to protect a “$110 billion arms sale” to the kingdom. Somewhere along the line, Trump suggested it was the work of “rogue agents.” He said he spoke to the King and Prince, and they told him they didn’t authorize or know about it.

Right, just like he believed Putin when he said he didn’t know anything about those Russian hackers who worked so feverishly on Trump’s behalf.

This president will believe anyone who is sufficiently deferential, and especially if they have $110 billion to spend on our defense contractors (for which he can take credit, of course).

There’s really no question that the Saudi prince essentially put out a hit on this journalist. Much like in Russia, nothing of consequence happens there without direct approval from the top and MBS has been running things as of late. He might have underestimated the global outcry, as well as Turkey’s surveillance capabilities, but he certainly knew there wouldn’t be much protest from our executive leadership.

The Saudis, like the other autocratic nations, know that they can get away with whatever they like with our GOP leadership, as long as they can dangle big bucks under their noses. They know that this crop of Republicans has no moral compass other than “Show me the money.”

Sure, they’ll pay lip service to the Bible and treat women as nothing but glorified incubators, but that’s just to trick enough non-rich voters into keeping them in office. Social issues are election ploys, not their Prime Directive.

They also knew that our state-run media, aka Fox “News,” would back the president’s soft-peddle of the situation. Fox’s Tucker Carlson complained that the outrage over the dead journalist was all an act, because “Nobody knew him two weeks ago.”

I submit that that no one knew who Daniel Pearl was either, before he was kidnapped by ISIS and beheaded on YouTube, but that doesn’t lessen the outcry in the face of such barbarism. Good people will always protest acts of savagery against our fellow men and women, wherever they’re from.

You can’t take what anyone from Fox says seriously. If Obama was still President, they’d be calling for an investigation, probably blaming him for lax security in Turkey.

Even this “big arms deal” isn’t necessarily all that. Vox points out that it isn’t even a contract, but letters of intent, negotiated by the Obama Administration, for the purchase of our weapons. The Saudis have only contracted for only about $14 billion out of that original $110 billion. (Not that Trump won’t take full credit for the deal, if it does transpire…)

As for losing jobs, that’s also a myth. The defense industry employees are churning out those planes and weapons regardless. If the Saudis don’t buy them, someone else will.

So why the tepid response from the Prez? I think he’s looking to not ruffle any feathers that he might need later to expand his hotel brand into the Middle East. That, plus he certainly has no love for journalists, especially those critical of him.

He’s been pampered and catered to his entire life; you’re not going to see him exhibiting anything resembling empathy. Same for the rest of the GOP leadership. They don’t care about anyone else’s troubles. They only hear the bells that their masters, the big donors, ring.

Right now, they’re using abortion and the fear of gays and foreigners as a platform for re-election in the mid-terms. Mitch McConnell has already stated that they are targeting Social Security, Medicare and Medicaid for reduction, to offset the massive deficit their tax giveaway to the rich created. 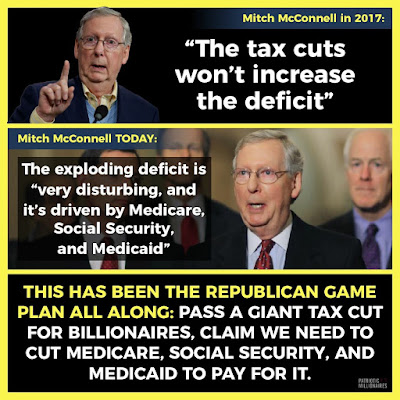 Someone must have slipped Mitch some truth serum because I can’t believe he said that out loud, just weeks before the election. That’s their solution, to further impoverish the nation’s middle and lower classes, to pay for tax breaks for the 1%. He must really trust their voter suppression operations because that’s a big bagel to toss out there.

Even more crassly, he stated that there would never be Social Security “reform” as long as the GOP held all houses of government.

This is quite the illuminating statement. They have all the control; they can do whatever they want in government. But they won’t, because they know such a move would be massively unpopular. They don’t want to do it until they can shift the blame to the Democrats.

I would ask, “If this course of action is so wildly unpopular, as representatives of We the People, why pursue it?”

And there’s only one answer: Because the GOP does not care what We The People think, they listen only to their big-monied masters who fund their campaigns. The rich business owners don’t want to spend money on anything that doesn’t come right back to the bottom line. They don’t want to fund health care or retirement or keeping their own poisons from destroying the atmosphere. They want big profits next quarter and every quarter, whatever the collateral damage. 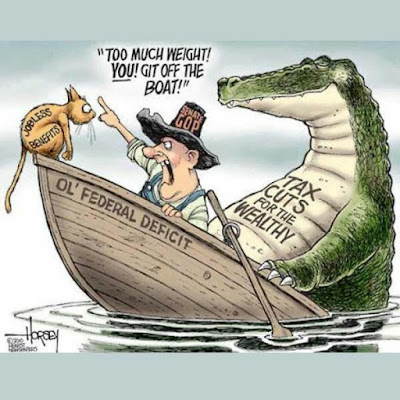 But they can’t publicize that because they need non-millionaire votes.

All along, we thought that Trump’s FEMA neglected Puerto Rico after the hurricane because the island was full of Puerto Ricans. But now I have to reconsider.

Where is FEMA in Florida? All you hear is “Where’s FEMA? Where’s the help? Where are the trailers, food drops, water bottles? Hell, where are the freakin’ paper towels Trump likes to toss out?”

And the Florida panhandle is Trump territory; you’d think he’d have had FEMA all over that. But support him or not, he just doesn’t care about the average citizen, let alone the average citizen in trouble. None of the Republicans do. If they did, you’d see a much different response on the ground. Hell, no one’s even talking about Hurricane Michael anymore.

We The People?  The Republicans say, “Screw’em.”
Posted by bluzdude at 6:01 PM