With the writing on the wall growing bolder and larger that this election may not go their way, the Republicans are scurrying to find ways to protect their power and influence. It’s a problem when your dominant philosophy is to prop up the rich… there just aren’t enough rich voters to win elections.

They could develop a platform that addresses the concerns of middle and lower-class voters in such a way that they siphon off votes from Democrats… BUT, that would come at a cost to the rich. So, they work on the next best thing: suppressing the votes of their rivals.

They’ve been working on this ever since Obama won in 2008 and they’re still honing their craft today, in ever more egregious ways.

In Georgia, they’ve instituted a “perfect-match” system that if every hyphen, middle name/initial formation and Jr/Sr designation doesn’t match exactly to drivers or social security records, the citizen is not permitted to vote. To rub more salt in the wound, the Republican nominee for governor is the current secretary of state, and he personally has held up over 53,000 voters on his desk, 70% of which are African-American. “Coincidentally,” he is running against an African-American female.

And of course, that’s not their only tactic: 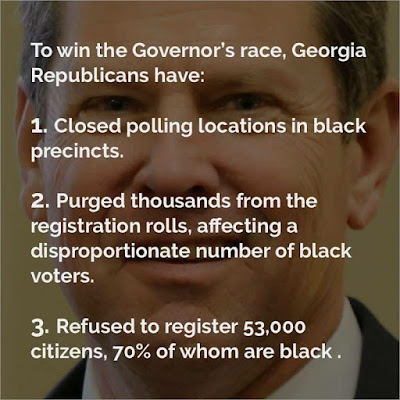 In North Dakota, they’re squeezing the Native American vote, who they fear will vote to re-elect their Democratic senator. 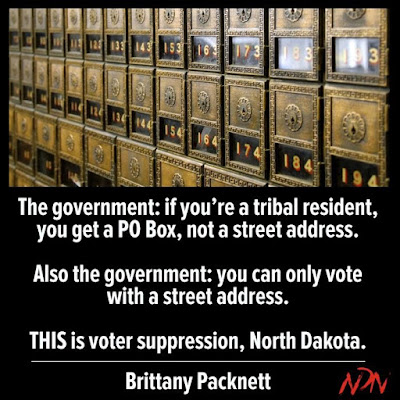 The newly constituted Supreme Court just ruled that this was somehow legal.

In Texas, North Carolina and Ohio, they’re purging voter rolls faster than people can sign back up, in addition to closing polls in urban areas and closing ID-issuing offices like the DMV, in the same areas. 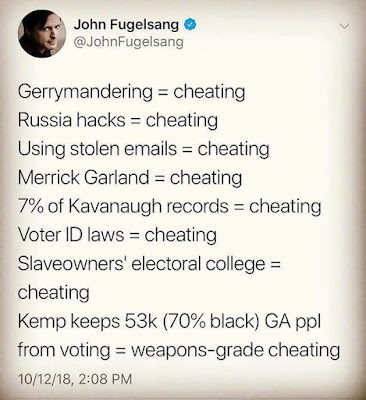 And it’s all just a big coincidence that it overwhelmingly affects people likely to vote Democratic, right?

All this treachery is being blamed on a myth, that there is rampant voter fraud going on.

In fact, there is not. Several commissions and studies have set out to find it, yet no one has. A Loyola law professor conducted a 14-year study, which found 31 fraudulent votes out of over a billion votes cast.

Bush’s justice department was charged with finding (Democratic) voter fraud and came up with a goose-egg… except for a couple of fraudulent Republican votes.

It’s just not happening. That means every time a Republican politician tells you he supports voter ID to prevent voter fraud, he is lying right to your face.

I Know You Are but What am I?
To listen to conservative media, you’d think voter fraud was an epidemic, with all the claims that the system is rigged. Granted, the system IS rigged, but it’s clearly the GOP that’s doing the rigging (via voter suppression, gerrymandering, and soliciting/not-punishing or investigating Russian interference).

Isn’t it funny how Republicans are always throwing charges at Democrats of things they’re doing themselves?

Look at how many times they bring up Democratic donor, George Soros. Lately, he’s charged with paying Kavanaugh protesters. But it’s always something.

Look, the Republicans have dozens if not hundreds of Soros’, like the Koch Brothers will fund anyone who will cut environmental regulations and fight a higher minimum wage, or father/daughter Robert and Rebekah Mercer, who funded the Trump campaign, or any number of big fossil fuel, agricultural or pharma business executives.

If Soros is funding Democrats, he’s contributing to a party that will cost him money, (via targeting the rich for tax hikes), but he’s doing it for the greater good. The rest of the GOP deep pockets are merely trying to protect their profits and keep the federal spigot open for more.

Republicans charge Democrats with obstruction of legislation and judicial seats, after clogging up the same for 6 solid years under Obama.

They charge Democrats with filing frivolous bills and taking “show votes,” after voting over 140 times to overturn the ACA, while Obama was in office (therefore ensuring a veto).

I say, if the Republicans make a charge of Democratic malfeasance, start the investigation on them, immediately.

Swift’s Not So Modest Proposal
It was interesting to me that Taylor Swift made a political endorsement of the Democratic nominee for governor of Tennessee. I wasn’t sure how much good it would do for people of voting age, but apparently, they saw a spike in registrations immediately following the endorsement.

Those could be backlash registrations as well, but I’m glad to see people engaged in the process.

The kicker is that she’s been used as kind of a mascot for the White Supremacist groups, who hold her up as the White Power symbol of perfection. I mean, who is possibly whiter than Taylor Swift? 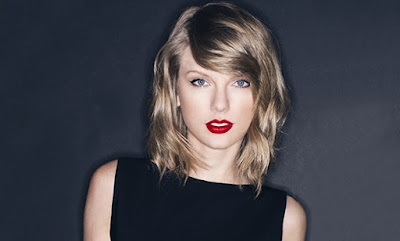 The blockheads must be going ape-shit over this though, being disavowed by their poster-girl. Maybe this was a tactic of hers to remove herself from the knuckle-dragging crowd.

It took a lot of guts to take a stand, especially from a former “country” star. It could cost her money in lost sales. Or maybe not. Or maybe she doesn’t care if it does.

Next thing you know, Republicans will be saying that the protesters are being paid by Taylor Swift instead of George Soros.

What makes me angry is when, in the immediate backlash, the common line was, “What does she know about politics? Just shut up and sing.”

I’m not saying she or any celebrity or athlete endorser is necessarily a political genius, but maybe they are! Who knows? Not me. Not the people slinging the dirt. Maybe they keep up on the new news just like anyone else. Being a celebrity does not disqualify one from having an informed opinion about political matters. Celebs are just like us in that way… some are smart, some are dumb as dirt. You can’t generalize. I do know that she is one good businesswoman and has guided her career with purpose and effectiveness.

In fact, if Taylor Swift has refrained from watching Fox “News,” I guarantee she has a more informed opinion than those who seek to shut her up.

60 Minute Man
As if to prove my point from my post on the Kavanaugh hearing, President Trump stated on 60 Minutes, last night, how little he cares about Dr. Ford’s sexual abuse.

“I’m not gonna get into it because we won. It doesn’t matter. We won.”

It doesn’t matter. We won.

He actually took credit for the “win” by saying his mockery of her made the difference.

In a post, two weeks ago, called “They Just Don’t Care,” I wrote:

“They know Dr. Ford is telling the truth. They’re just not prepared to do anything that dilutes their power.”

A woman gets assaulted in her youth and again in front of Congress, but that’s OK. They got the “W.”

I am so weary of all the politics. Especially the orange man in the white house. I live in DCMetro where this is constant. I am running away....to Canada.

It's a total circus. And it most certainly isn't a democracy anymore.

Where they now have legalized pot! You won't be the first...

We have to make sure we VOTE. That's the only way to take back control. They WANT us to lay back and be disinterested. That's how they get away with larceny.

We have to find a way to get people registered, except where it is too late, and get out the vote. Otherwise the only chance to save the country might be a small, well timed, well placed thermo nuclear device. I am actually surprised that it hasn't been tried yet.

I would suggest in DC, but that's a leeeetle too close for comfort. Wait, wasn't that basically the plot of "Designated Survivor?" With our luck, Sarah Huckabee would be the only one to crawl out of the rubble.

Note: Dear Secret Service, this is just a joke. No one here is blowing anything up.