Justice is Served
So, we have a new Supreme Court Justice. [Sad trombone…] The sham FBI investigation provided enough of a fig leaf that the alleged fence-sitters could claim “due process,” while in actuality, the process was most “undue.”

They didn’t interview anyone who could cast doubt on Kavanaugh’s story and that was 100% by design. Granted, the FBI didn’t exactly provide a witness list, but you can tell by all the people who publicly announced that they weren’t interviewed, that the fix was in.

Dr. Ford and the other accusers provided lists of people who could corroborate their stories. Sounds like some people to talk to, doesn’t it?

Nope, that would lead to more bad news. Perhaps there were only so many people the GOP could threaten and slur before the public caught on to the fact that it was all a charade.

They also decided the fateful “party” was on July 1st… not that Dr. Ford said it was; she actually said it wasn’t. But that’s the date the FBI investigated and what do you know, no one remembers anything happening! Go figure!

The Republicans didn’t want a real investigation; they just wanted the appearance of one that they could then use to say, “Hey, we investigated and there’s no proof.”

The outcome of this investigation was written before the first question was asked.

And if that doesn’t piss you off, make sure you read last week’s post about the hearing. That should do the trick.

Justice is Served Pt 2.
Mitch McConnell, the man who made this SCOTUS travesty possible, hinted to the media that he is open to the possibility of processing a nomination in 2020, should the need arise. Mostly, though, he tried to sidestep the issue.

Remember that McConnell stonewalled President Obama’s nomination for over 10 months because it was an election year and The People needed to weigh in on the matter. (Regardless of The People weighing in most decisively in 2008 and 2012 on that very subject.)

But should Trump try to fill a seat in 2020, I’m guessing he’ll have a major case of amnesia and hustle the nom through like he did with Kavanaugh. Actually, I’m not guessing at all. I guarantee that McConnell never holds up a Republican nomination for the sake of an upcoming election, ever. They just don’t work that way.

As I’ve said before, you can’t shame Republicans. They claim no memory of or adherence to anything they’ve said or done in the past. I mean, how can they look at themselves in the mirror after complaining about Democratic obstruction? They mastered the art of obstruction between 2010 and 2016. Nothing got passed from the Obama White House once the GOP took over the House.

They ushered in the era of no-compromise politics; they need to shut up and deal with what they’ve wrought. They don’t get to complain when it comes back to bite them on the ass.

Pay No Attention to that Story Behind the Curtain
While everyone was fuming over or defending the Kavanaugh travesty, the NY Times broke a huge story about the President and his family’s corrupt past.

It seems his father, Fred Trump, engaged in hundreds of millions of dollars’ worth of tax fraud to pass on business profits to his children. And for all of the “legend” of Donald Trump, the self-made billionaire, he’s nothing more than a silver-spoon-fed heir to his daddy’s money.

So far, I’m not seeing much in the way of push-back from the Trumps or GOP leadership, and that’s probably because the Times has this story cold. They have the documents to prove every word of what they published, or else it wouldn’t have run. That’s how real journalism works.

Naturally, no one seems to care. A scandal like this should take down any politician in America. Perhaps we all just assumed Trump was a swindler and a scammer and voted him in anyway. Kinda like how we all knew Bill Clinton was a horndog.

But geez, chiseling a prospective tax bill from $550 million down to $52 million, through undervalued assets and dummy shell corporations ought to raise more than a few eyebrows with law enforcement. Or maybe it did, and we just haven’t seen what’s to come yet.

I bet the State of New York would love to claw back some of that dough they were owed. Stay tuned.

So That’s Where He’s Been for the Last 20 Years
I was watching Jurassic World-Fallen Kingdom on Blu Ray of last night, after having seen the movie in the theaters this spring. I still love the movie, I don’t care what anyone says.

But it wasn’t until I was watching the bonus features that I heard something that rocked me. In one of the SFX featurettes, they mentioned something like, “And this is where Ted Levine gets his arm chewed off.”

I should have paid more attention to the credits. Yes, the guy who played “Buffalo Bill,” aka Jame Gumb, in “Silence of the Lambs” played the head dino-wrangler and bad guy in Jurassic World. He looked pretty much like the shot on the right but wore a ballcap and dark aviators for most of the movie. 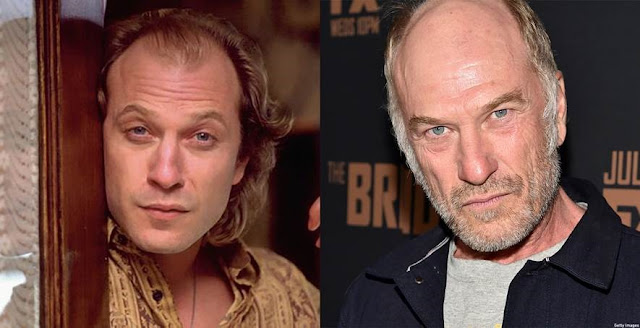 I didn’t even notice, which kinda ticked me off because I would have watched it a whole different way. I started coming up with alternative dialogue immediately.

“It rubs the Rex upon her chin or else she eats a goat again.”

“Was she a big fat Triceratops?”
Posted by bluzdude at 6:17 PM