Once again, we sit on the precipice of an election that will determine the direction of the next two years.

The number one issue on the ballot is our 45th president and his Trumpism movement. (That consisting of, race-baiting, attacks on the free press, tax cuts for millionaires, budget cuts for everyone else, killing protections for citizens and the environment, and lying about every one of these things.)

We have a chance to put the brakes on the new theocratic dictatorship for which we’re heading and vote in a Democratic House of Representatives.

It would be nice to flip the Senate too, but that’s a real uphill battle. The Democrats are defending 24 seats, the Republicans only 9. Flipping a couple of Republican seats may be doable, but Democrats also have to hold onto the ones they already have, which is not a given. Blue senators in red states have a tough fight, especially where they must overcome the GOP’s voter suppression efforts.

Speaking of, did you see the news from Georgia today? Brian Kemp, Secretary of State and nominee for governor, is asking for an investigation into Democratic election hacking. Right. After all the effort he’s personally put in to prevent black, poor and elderly people from voting, he’s charging the Dems with election tampering? These people are shameless.

Trump is going around the country making sure the election is all about him. How much do you want to bet he denies responsibility if the Democrats do pull off a blue wave and flip the House? That’s our “leader;” taking credit for every success and blaming every failure on someone else.

This is a time, (well, this and again in 2020), where we as a country will decide what kind of a country we want to be.

People who think adding more brown people to the population is our greatest threat will vote Republican, as will most rich people, gun fetishists, evangelical Christians, homophobes, and those who don’t recognize empathy. Everyone else will vote Democrat. If everyone shows up, Dems win big. If not, the inmates win and continue to run the asylum.

I don’t understand how anyone can be apathetic about this, or any, election. What issue does anyone face that doesn’t have a political side to it? If you have an opinion, there’s a political aspect. The laws under which we live are a direct result of those we vote into office.

I also don’t understand those who don’t think their vote matters. It’s not a matter of any single vote… it’s a matter of how many people do or don’t harbor that opinion. After all, what is a hurricane but millions of individual water drops working together?

Votes matter, or else states like Georgia and North Dakota wouldn’t be trying so hard to prevent certain people from casting them.

Personally, I leave nothing to chance. I early-voted the Saturday before last. I want my vote “in the bank” before anything can happen to it or me. 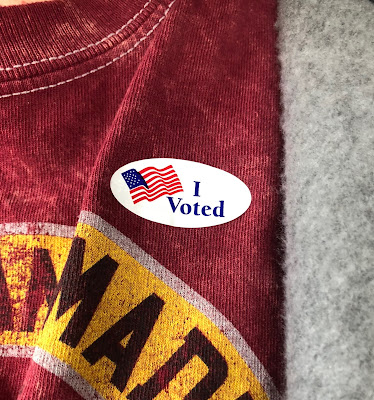 We currently have the most unqualified, disorganized, and narcissistic president in our nation’s history. To continue to let him run roughshod over the 75% of the population who didn’t vote for him is an act of our own gross negligence.

The circus has to end, and we’re just the clowns to do it.
Posted by bluzdude at 6:11 PM