Happy Cyber Monday! I hope you’ve awoken from your food coma. I feel like I’ve just gotten up from a 4-day feast, (mostly because I have.) I was off work since Wednesday so it feels like all I’ve done was sit at tables and eat various arrangements of carb and calorie-laden dishes. That’s another reason I’m thankful to be employed. If I was home all day, I’d probably never stop eating. Maybe I should rethink retirement. Or eat more vegetables. (Nah.)

As I perused the social media sites over the break, I found a fresh batch of BS to pick apart. Leave it to Family Values Conservatives to repeatedly miss the point. Like with this one: 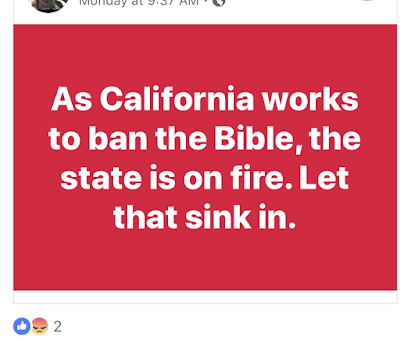 This is an easy one because only half of this is true. Guess which half.

That’s right, it’s the second half. There is nothing truthful about California banning the Bible, thus negating the entirety of the inferred message.

The root of the misconception came from a hard-right media outlet, who during a Q and A, twisted California’s banning of gay conversion therapy into banning the bible. The thinking goes:

Some religious people believe homosexuality is a sin. Sinners can be redeemed if they repent, so they must be able to pursue treatment. California banned gay-conversion therapy; therefore, California banned the Bible.

And then blaming a natural disaster like a wildfire on a piece of legislation meant to keep people from being tortured? Please.

Gay conversion is a barbaric system of abuse that results in lasting damage done to the object of this “therapy” and has been disavowed as quackery by professional medical and psychiatric organizations.

The creator of this statement is either a con-artist who knowingly published this twisted logic because he knows that people will believe anything if it aligns with their worldview, or he’s as gullible as he is mean. Let that sink in.
***

This is another well-traveled road, which always leads to the same place. 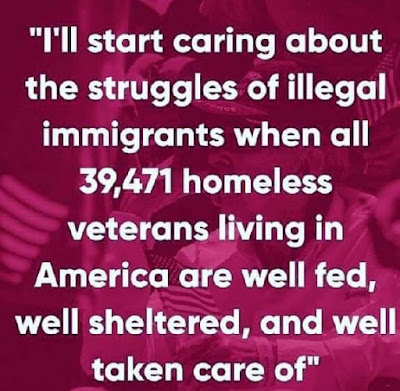 It’s always some kind of binary equation that doesn’t have to be. As if you can’t accomplish anything unless (X-issue, usually homeless vets but not necessarily) is addressed first.

Republicans have had unlimited power since Trump took office. Where are the bills to help homeless vets? Any riders tacked on to funding bills? Any bills to address the decades-long problems at the VA?

Nope. Just a lot of righteous indignation at the prospect of helping someone else, especially brown people.

Here’s a news flash: We could accomplish both if Republicans actually wanted to. But they’re afraid they might have to give up some tax cuts for the rich, so anything proposed to help these other two communities is a non-starter.

Then the rich, in order to keep the spigot of tax dollars flowing, spend millions via Fox “News,” talk radio, and social media to convince poorly educated Americans that a bunch of brown women and children are a threat to their own existence, who then go on to create cynical memes like this.

Let’s not forget the police and military fetishists, who think their heroes can do no wrong. 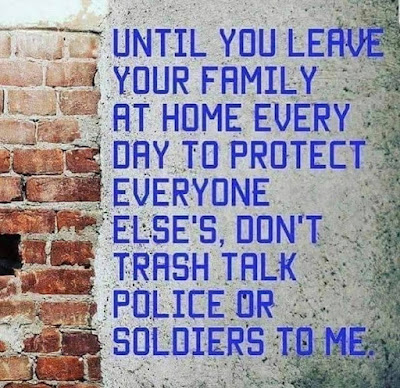 This is only a statement of opinion, so there’s no technical “debunking’ do to here, just a counterpoint that there are problem employees in every field and police and the military are not exempt.

Any familiarity with the news over the past 10 years clearly shows that there is a significant amount of police officers who are scared stiff of black men and others who don’t even see them as humans. The “shoot first and ask questions later” attitude is going to tear this country apart, as unarmed black men are being killed right and left, especially as conservatives keep throwing out “more guns” as the solution.

As this weekend’s news showed, a “good guy with a gun” is only the solution when it’s a “white guy with a gun.” Black men need not apply, lest they be immediately mistaken for the perp and fired upon.

I’ve said it before, but this problem will not go away until the people doing the policing are the same color as the ones being policed. As long as people of one color are fearful of and hostile to those of another, neither side can effectively police the other. We will have a tinderbox on our hands that will flame up and burn everything in sight.

I readily acknowledge that there are tremendous people doing dangerous work as police officers, who work long hours for insufficient pay. But there are also some jacked up, power-mad thugs who enjoy wielding their power over those with none.

And they must still be in the mix because these police killings of armed and unarmed innocent people just don’t stop. You’d think that with all the negative attention that goes to these killings, there would be a concerted effort to stem the flow of innocent blood. The news tells us otherwise.

To end on a lighter note, here’s something that made me laugh out loud last week. I probably should have saved it for Easter but I’d have forgotten about it by then. 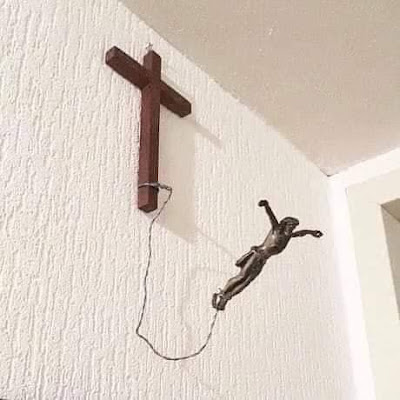 Bonzai!
Posted by bluzdude at 6:15 PM

How stupid does somebody have to be to imagine that a state could ban the Bible? If there's anything that the First Amendment protects against, it's that. At best one might be able to require registration of Bibles and a mandatory background check before buying one.

As usual, they think that when they can't impose their taboos it means they're being persecuted.

The police/military one is just a variant on "Group X makes significant sacrifices, therefore they are exempt from criticism." When it's put in blunt language, it's an obvious non sequitur. So it relies on vehement and emotional language to discourage challenge.

Bungee Jesus is a new one to me. The person who made that clearly has no fear of Hell.:-)

Love Bungee Jesus. Gonna hafta make me one of those!

These things work because people want to believe the worst about their opponents. If they thought logically about it, they might come to a different conclusion.

Cracked my shit right up...

As many of us from the public service sector do. (Former 15-year retail monkey here.) And that's without even hearing their political opinions!