Now that we’ve reached Thanksgiving Week, one turns inward, to navel-gazingly ruminate on those things for which we are thankful. No matter how awful things can seem, we should always take the time to acknowledge and express our gratitude for the good things in our lives.

…that our current White House occupant is just about half-way through his term. Really, it only seems like it’s been 10 years of living under this orange cloud. May the second half seem to go by quicker than the first. (And I’m still not very enthused about impeachment. I’ve said it before, but I believe Mike Pence would be even worse, because he’d pass all the same noxious legislation, continue gutting financial and environmental regulations and providing tax “relief” for the rich, but he’d do it quietly, without stepping on his pecker three times a week.

…to that end, that we’ll see in a Democratic House of Representatives in January, to provide a brake on the damage Trump intends to inflict on the lower and middle classes, and the country in general.

…that there are organizations like Snopes.com and Politifact, to fact check the endless torrent of BS that spews from the political arena and help me with my occasional bouts of Debunkery. I know it doesn’t matter much, what with so much of the population who would rather believe a smooth lie than an ugly truth, but it makes me feel better that the truth matters somewhere.

…that I have a reasonable amount of job security. I’ve been with my current employer for over 20 years and I love my job. I’d like to do my current job for the next 10 years, or as long as they’ll have me. Then, retirement, here I come!

…that I live in a major-league city. Sure, Baltimore comes with its problems… drugs, STDs, rampant violence and 300 murders a year. But at least I can go see major league baseball and NFL football without the need for a long road trip. And when I’m not necessarily crazy about the hometown team, the teams I DO like eventually come here. As someone who spent most of his life living several hours from a major league stadium, I appreciate the luxury.

…that my family is alive, well, and relatively healthy. The fact that I still have my parents around, at my age, is amazing. We all may have our ailments, but we still trundle along none the worse for wear.

…that my city is also home to world-renowned Johns Hopkins Hospital, where I go for treatment for occasional a-fib episodes.  Had one just last month and they were able to put me back in rhythm without the electrical jolt this time; they just used medication. (They still tried to keep me overnight, but that didn’t work out well for them.)

…for modern technology, in that I can take my blood pressure and an ECG from home and use my phone to relay the results to my doctor. Seriously, the shit we take for granted now used to require a hospital visit.

…that I met the woman of my dreams almost two years ago, and for some reason, she still puts up with me. We’re getting married next June, so if she’s gonna opt out, she better make it soon. (After which I may or may not move out.) Meanwhile, I’ve had the happiest 2-year stretch of my life and she’s directly responsible. Happy Thanksgiving, Sweetpea!

...for this big, furry, beast, who takes very good care of his mommy. 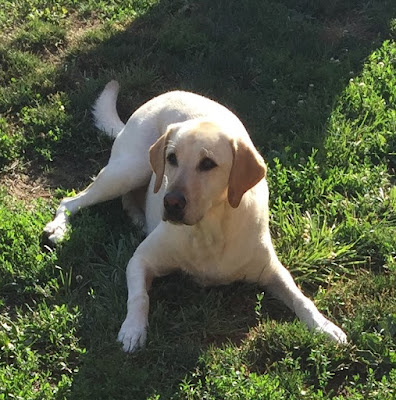 I feel much better leaving the house, knowing that he's standing guard and will rage-bark at any disturbance, be it from neighbor, mailman, or plastic bag blowing down the street. Although if an intruder ever comes in bearing treats, his mommy is on her own.

…for the community of bloggers that produces such amazing insight, and occasionally comes here to look over mine. I appreciate your visits and occasional links more than I can say.

Happy Thanksgiving to you and your loved ones. Now let’s eat.
Posted by bluzdude at 6:22 PM