Someone, Please Set the Alarm?

I’ve never been a dewy-eyed optimist, but I have this dream that one day, people will come to their senses, throw off the knee-jerk tribalism, and realize that there are things they just cannot support, even when these things pervade their own team.

Look at the positions that people are forced into taking just to stay within party boundaries, like the anti-science, anti-environment, anti-consumer stances taken by the big business (or “controlling”) wing of the Republican party. Sky is green, grass is blue, up is down, left is right…

Company line is that there is no climate change threat (or if there is, it’s not man-made, and if it is, we can’t stop it). The party line contradicts mountains of evidence collected by experts in environmental sciences and are accepted by every civilized society in the world, but some business people think it will hurt their quarterly report, so they deny the science based on nothing but greed.

And the tribe laps it up and spews it back out, right up until Miami, Galveston and the Outer Banks are washed away. When are people going to realize that our children and grandchildren are going to have to find a way to live in a polluted, arid, country that makes the Mad Max world look like Utopia? Or makes “Waterworld” look like a documentary?

Why do people get worked up about deregulating government or banking or food preparation, etc.? The regulations are there for a reason… to keep large companies from compromising our safety or robbing us blind. Without these regulations, companies have free reign to take advantage of us in ever-increasing ways. No wonder they rail against regulations… they could be screwing us all the harder without them! 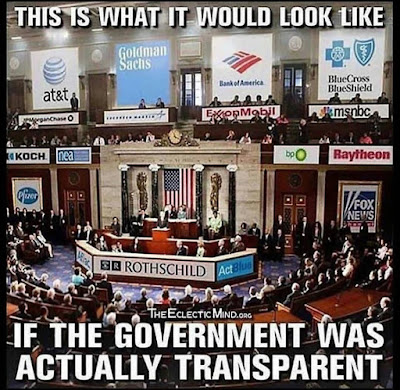 We had an entire recession, with people losing tens of thousands from their 401k’s, or losing their retirement funds completely, all due to banks playing fast and loose with OUR money. An entire set of regulations were put in place to make sure that never happens again and now the Republicans are getting rid of all of them, including the governing board put in place to enforce the rules.

So that becomes part of the party line and the people never question it. Republicans actually campaign on this topic. How are they not booed off the stage?

When you cut away the lies and double-talk, it goes like this:

GOP Candidate: We want to make it easier for the banks to steal your money!

GOP Candidate: We want to let industries spew poison into the air and flush toxins into the water supply and then have the government bill YOU for the cleanup!

GOP Candidate: We want to cut taxes on the richest people in the country and have your state make up the shortfall in services by raising taxes and fees on YOU!

Does no one realize the consequences of aggressively deregulating and passing massive tax cuts of which we barely taste?

Republican leadership plays their constituents for suckers and laughs all the way to the bank.

How did people get so brainwashed that they can’t see the damage their party’s platform does to the lower and middle classes?

Granted, Republicans do throw out the bait with social issues. Social issues like abortion, same-sex marriage and immigration are perfect for them because they can promise the moon and if they don’t deliver, hey, at least they tried. And if they do deliver, it’s not terribly expensive (to the ruling 1%). They know everyone needs someone to shit on and they’re for anything that keeps the base in line without impacting annual profits.

Conservatives love to rail at “Hollywood” for trying to force “their” morality on them (in the guise of tolerance and acceptance of people who aren’t straight, white, Christian Anglo-Saxons). When are they going to realize that they're doing the same thing when it comes to abortion? Will they ever realize that Person A pushing values on Person B is no different than Person B pushing their own values on Person C (and all the other Persons)?

It’s a raging hypocrisy that Republicans are forced to accept if they want to be part of the team.

I long for the day that people wake up and go, “The President is a lying, narcissistic, criminal and I’m not accepting it anymore. We can do better.”

Or “You know, those tax cuts for the rich didn’t hit my wallet at all. In fact, they haven’t hit anyone’s wallet that I know. We demand better.”

Or, “I love that stream back behind my house. I don’t WANT the coal company pouring sludge into it and ruining the fishing. Or polluting my well. We need someone in government who looks out for MY concerns.”

Or, “I support gun ownership but restricting ownership of military-grade weaponry, which not one citizen of this country needs for any purpose, is a rational response to the mass killings and not the destruction of the Second Amendment. Enough with the hyperbole, we need action.”

The list is almost endless. But still, here we are, with 40-some percent of the country cheering the harm being done to themselves.

I know that the rich, the evangelicals, racists and gun fetishists will never be swayed, but I dream that the rest wake up and maybe help change this back to the country that used to be a shining example.

It’s like the alarm is set but the only button on it says, “Snooze.”