Republicans have found themselves a new boogieman this winter, in the name of Alexandria Ocasio-Cortez, or “AOC” for short. I’m not sure if it’s because of her politics or that her name is so long (and Latin). They should consider themselves lucky because it could be worse. Both Ocasio and Cortez are relatively short. What if her last name was something like Rodriguez-Dominguez de Jesus?

Sorry, I don’t mean to lead with a tangent…

Ever since she won her House of Representative’s race, the knives have been out for her more than anyone else, even the Muslim woman who called Trump a motherfucker. She won by campaigning on income inequality and representing the needs of the middle and lower classes. For real, not just lip service, and that’s why conservatives are scared. 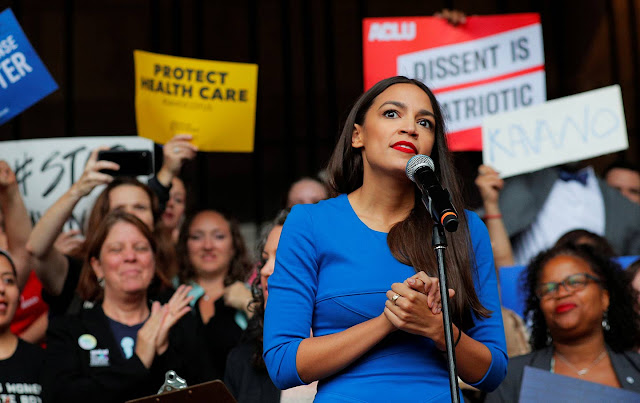 Source
The last thing they want is for the country to start coalescing around a charismatic populist, then turning out in numbers to vote for their own financial interest. That would spell the end of Republican control of anything.

So naturally, anything she does becomes fodder for attack, from clips of her in high school dancing to what clothes she wears, to where she used to live.

Now, I don’t know that all of her ideas should be adopted right away. She campaigned as a Socialist and has a lot of grand ideas for how to reshape the country.

The country will not move easily or without a fight from those vested in the status quo. But hard-left politicians like AOC (and Bernie Sanders in the Senate) are necessary if we are to move to the left at all. (And by “moving to the left,” I mean focusing the government’s interest finding ways to benefit the many rather than the richest few.)

Like a seasoned negotiator, one doesn’t “open” with their final demand. There will always be push-back, and in this case, by those with the most resources. If progress is to be made, we have to accept that it might be one step at a time. No one is going to be allowed to sweep in and institute single-payer health care, free college, and a ban on coal mining.

For example, we may not be able to create, a single-payer health care system this term, but we can at least start moving incrementally to a more equitable system. The monied few are not going to give up their influence without a bloody fight so they will oppose any efforts to repair the ACA. And the better the ACA works, the less distance there is to jump to single-payer.

I think she’s going to be the more effective force for change in the long run, because she is a candidate of these times. She’s young, proficient with social media, and able to relate to other Millennials and Gen-Xers. She’s been handling the Twitter trolls with class, wit, facts, and a biting edge. If she can draw out more candidates like herself, then we have the basis of a movement. 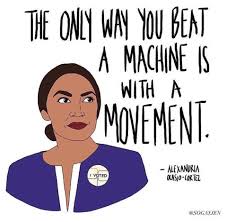 And we all know how nice it feels after a good movement!

She is the living embodiment of what Trump pretends to be; with apologies to Coke, she’s the Real Thing. He poses as a populist but every significant action he’s taken has been to benefit the rich. (Or racists or religious zealots.) He acts like he’s a “man of the people,” while having his silver spoon gilded in Trumpian gold.

Speaking of the Current Occupant, did you see how he claimed that the Democrats “could solve the shutdown in 15 minutes” if they’d “come back from their vacations and get back to work.”

Yes, HE, of all people, is complaining about other politicians’ vacations. [massive eye roll]

Anyway, do you see how easy he’s making it for the Democrats? All they have to do is give in to his demands and the shutdown is over. What a dealmaker!

As Stephen Colbert once characterized the Republican negotiating philosophy, “You scratch my back… and I get my back scratched.”

He doesn’t want a deal, he wants the fight, so he can be seen as a fighter by his base (and Fox “News”). I think having the longest shutdown on record occur on his watch is a goal of his, not a problem… that way he can go on about how his shutdown (that’s totally the Democrats’ fault) is the biggest and longest of all time.

And the Democrats can’t cave; they’ve got significant leverage for the first time in 2 years. They can’t just roll over, even to get everyone paid. Or else this will become the new normal.

That’s why I think we better buckle in because it’s gonna be a bumpy ride.
Posted by bluzdude at 7:15 PM