After 35 days of building pressure, Individual 1 finally agreed to turn down the heat and let some steam escape by reopening the government without any wall money.

Unfortunately, the pot has gone right back on the stove because the resolution only bought three weeks’ time before there’s another impasse. Republicans and Democrats can sit down and solve a simple problem like stemming illegal immigration in three weeks, right?

Yeah, probably not. These guys can’t agree on lunch without a continuing resolution.

But for the time being, at least we can get some people paid, (assuming it doesn’t take three weeks to get Payroll functioning again). I bet this won’t help those who are suffering from the downstream effect… you know, retailers and contractors who rely on federal employees to spend money with them.

I know if I were a federal employee, I would have all projects on hold until there was certainty on the “getting paid” front. Nobody’s talking about this crowd though. I don’t see any programs designed to make these people whole again.

Poor Donald ran afoul of his puppet-masters, though, Ann Coulter and Rush Limbaugh. They were not amused by their guy caving in. But for the life of me, I don’t understand why anyone gives a fig about what those two ghouls have to say. Obama never gave Rachael Maddow veto power over his decisions.

It's easy to screech at people from the sidelines, without having to actually DO anything.  I guarantee you this though. If some major disaster were to befall the country because of the shutdown, like a plane crash due to insufficient traffic control personnel or a terrorist who got a bomb on board due to the TSA sick-out, these two clowns would be out there going, “Not my fault… I’m not the President. I don’t have a vote in Congress.”

Buck-passing motherfuckers... They stir up a mountain of shit and then point fingers at everyone else. Of course, they’ll be the first to take a bow should anything (they consider) good happen. They’re just like Trump, now that you think about it.

The fact that Trump didn’t get the one thing for which he was holding out makes you wonder what it finally took. I mean, he obviously didn’t care about forcing 800,000 people to go without their paychecks. 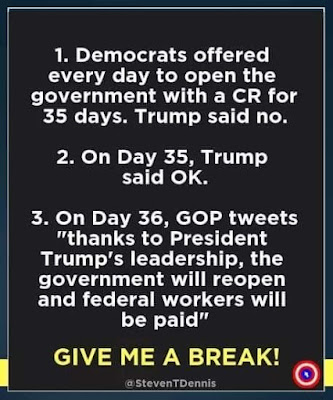 The horror stories abounded, which makes one wonder, how good can this economy possibly be if missing one paycheck causes so much strife? Even people with “good jobs,” like those who work for the federal government, are barely making ends meet, let alone saving for the future and/or retirement.

But it seems that temporarily shutting down New York’s Laguardia Airport plus the one in Newark got his attention. That was his turf and now his friends were being inconvenienced.

I say that if they try another shutdown, the first thing we do is have the air traffic controllers at Dulles and Reagan International start calling out. Let Congress stew in their own juices for a while.

Or maybe the cynics are right and Trump opened the government to get the Roger Stone indictments off the front page. He does seem to be a master of misdirection, doesn’t he? That’s the thing with this guy. There are so many outrages, no single event can fully play out before the next one is unleashed. And the next and the next. Who knows how many atrocities are taking place without anyone noticing?

Speaking of atrocities, or at least giant bumble-fucks, I have one observation about the Covington Catholic Boys. That “sneer” everyone was talking about? There’s a reason that look sets people on edge.

That’s the look of a bully when he knows there are lots of his friends around and only one target. He knew he was 100% safe because he was surrounded by his boys. He could be as obnoxious as he wanted to, so he chose to crowd the old guy and try to make him uncomfortable. Same with the rest of the punks in the crew.

I know there were layers of this story that spooled out over time, but none of them change my opinion that these were entitled little pricks bent on mocking a lone Native American man. Hell, they were already on film mocking female passersby.

Please spare me the apologies that the poor children were all unnerved by the Black Israelites, who taunted them. I guarantee they’ve taunted others in even more graphic terms. The only thing that shook them up was being called out on a national stage for their Asshole-ish behavior.

And what did the parents do? Made excuses for them, of course, making damned sure that they learned not a single lesson from their sudden notoriety.

They can sleep in comfort knowing that even entitled obnoxious bastards can grow up to be anything.

Like a Supreme Court justice.
Posted by bluzdude at 6:55 PM

Dumb question - what is the CR in that meme stand for?
800,000 is the amount of federal employees who couldn't go to work.
There are many thousands more like me whose businesses came to a screeching halt due to no one in my area is working. Therefore I can't eat either. This is far larger than just the federal employees. And it all sucks! There are six homes on my block - none of us work for the gov't and yet we are all out of work. All losing money. If this happens again in 3 weeks I predict this trickling down past my area and causing a huge recession. But what the hell do I know. I'm almost as dumb as the president.

CR = Continuing Resolution, or in other words, a bill to provide temporary funding to continue government operations. Like what Trump just signed.

Your bringing the "downstream" federal economy to people's attention with your comments and posts is why I included that in this post. It's a widely overlooked issue.

There is all kinds of help out there for federal employees, but everything entailed showing your government ID. As a minor example, the Baltimore MVA was offering free bus/light rail/Metro rides for government employees during and after the shutdown.

But if one exists mainly on federal workers' dollars, they're pretty much SOL. There are no IDs for that.

So don't sell yourself short. The President is WAY dumber than you. And to make matters worse, he just doesn't care. He doesn't see anything but his name on a wall and getting to claim a "win."

My industry and union had each other’s backs by declaring (think of Dana Carvey’s Church Lady now) oh, I don’t know...Saaaafety!?? Okay. That’s part of the deal. Don’t screw with our brothers and sisters paychecks. Someday, I’m sure they’ll have my back too? Yeah, right. I’m a civilian. But I’m sure sympathetic words will come.
Now let’s talk “intersectionality.” I come from a town and region. That town and region is/are going down the tubes. Now, have you ever heard of a house in D.C. going DOWN in value? No? Why not? My town and region very much wants (needs) D.C’s home values to plummet. You know how and why we need to get there. Fairness. It’s not just for the bureaucrats. In fact, it’s not for the bureau people at all.

I know one thing... The housing prices in the DC area are insane! It would be a benefit to everyone (who doesn't already own a house there) for those prices to drop.

I agree! The president is one of the dumbest people in D.C. and that is saying a lot.