Meet the New Year, Same as the Old Year

Nope, not much different yet in 2019, still chaos. Let’s look at a couple of points of agitation.

A Couple of Pitches from the On-Deck Batters
I’m sure everyone knows about Mitt Romney’s op-ed in the Washington Post last week. Romney leveled pointed criticism at the president’s foreign policy and general character. It’s unusual that you’d hear that from an incoming senator; that’s more likely heard from legislators who are heading out the door. Yes, they were hard words, followed by falling in line with Trump’s wall, conservative judges and the rest.

The Salt Lake Tribune thinks it was because according to their poll, 64% of Utah voters and half of Romney voters wanted to see him stand up to the President. Romney is nothing if not a consummate wind direction checker, but I wonder if there’s more.

I think he might be thinking of running for President again. Now that Americans elected a crass silver-spoon baby, maybe he thinks he would do better as a smoother, more genteel silver-spoon baby. (Except where it comes to canine transport. I don’t think he’ll ever live that down.) But maybe he’s thinking, “I’ll give you all the upper-crust aura without the bothersome boastfulness and porn-star shagging.”

It would be a real pisser of a thing to do to his constituency though. Utah just elected him for a 6-year Senate term. He’d have to start running for president almost immediately, thus shortchanging everyone who voted for him. Maybe he’s hoping they’ll forgive if he makes it to the White House.

On the other side of the country, Lindsey Graham is suddenly frothing at the mouth and going all hardcore on the wall issue. He used to be one of the few level heads on the right, but hell, he’s been barking it up ever since the Kavanaugh hearing.

Maybe he’s having presidential aspirations again as well. Sounds to me like he knows Trump may not finish this term and is trying to commandeer his base racists, isolationists, and gun nuts for a run of his own.

I think he should turn his attention to his own state. Doesn’t he know he’s got 187 miles of unfenced coastline right under his nose?

Shutdown
The partial government shutdown really could go on for months, if the Democrats don’t cave. Trump and the Republicans? They live for this shit. A shut down government is a conservative pipe dream. They just needed some people who are impervious to public pressure, like Trump and McConnell.

They probably think that if things get bad enough, the private sector will take over some areas and rid the government of having to maintain national parks and such.

Forget Yellowstone, sell the land rights to the Koch Brothers, let them rebrand the place and turn it into a giant canned-hunt facility… at least in the parts they’re not digging up or using to store toxic waste. Hire one of those Haliburton defense contractors to run the TSA. With fewer active wars going on, they should have some spare mercenary personnel to scan bags. And anyone caught smuggling contraband can be shot on the spot.

The thing is, Republicans have demonstrated over and over that they don’t recognize empathy, especially the president. (Exceptions: Anti-rich sentiment and reverse racism. There’s plenty of empathy for that!)

Trump even thinks federal workers are happy to forego their paychecks in exchange for leverage on a wall. He has no idea about the hardship he’s applying to these Americans. He hasn’t had to want for a single thing during his entire life. He doesn’t understand not getting what he wants immediately. 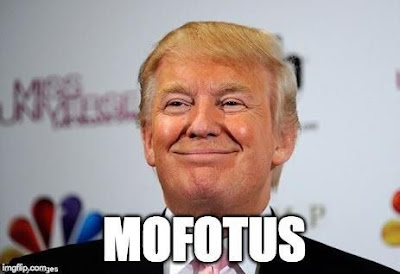 So Democrats are caught in a bind. They want to end this thing and help federal employees get back in the game. But if they do, they only empower Trump to shut down the government again and again. Plus, we waste $5 billion on a vanity wall that doesn’t solve the problem it’s designed to address.

I’m hoping cooler heads can prevail with some kind of work-around and reopen parts of the government bit by bit via narrow legislation. I’m not optimistic, though. Any such action would have to be blessed by Mitch McConnell, who takes his orders direct from GOP donors. Maybe if the Koch Brothers start missing their social security checks, they’ll prevail upon Mitch to break the logjam.

In addition to empathy, the Kochs also fail to recognize the concept of “enough.”

Strictly Redistricting
The Supreme Court agreed to take on redistricting cases from North Carolina and (right here in) Maryland. I have extremely mixed feelings about this.

On one hand, I would love to see the districting process be taken out of partisan hands, (if that’s even possible.) Just draw the lines straight up, without political factors. And as a resident, I realize that Maryland is heavily gerrymandered in the Democrats’ favor, which is rare. I would be happy to give that up, under one condition…

Which brings us to the other hand… it has to be everyone, not just Maryland. That’s how you’ll know if the fix is in… if the court somehow finds that Maryland has to be ungerrymandered but North Carolina doesn’t. And that could be a likely result if they find narrowly in each case. I think that’s more likely than finding broadly and invalidating district maps all across the country. I don’t think you’ll see this court vote against the benefactors who installed them on the court for this express purpose in the first place.

A couple of years ago, the justices split 4-4 on the legality of North Carolina’s repressive voter ID law, which was found to have been drawn up with surgical precision to suppress minority voting. Now take away Kennedy and add Gorsuch and the frat boy, and what do you think we’ll get?