So much bullshit, so little time to clean it up. Facebook has been rife with false and misleading memes so it’s time for a little debunkery! 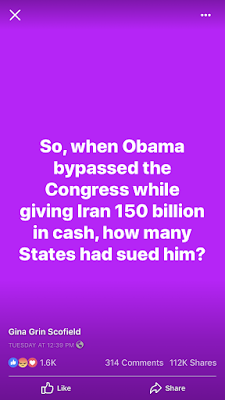 This was a Facebook status that’s been shared an alarming number of times.

I’ll start with picking the nit that Obama didn’t give Iran a dime… he had their assets unfroze to let them recover money that was theirs to begin with.

But the main fallacy here is the false analogy of Obama “bypassing” Congress to “give” Iran money while not being sued, vs Trump being sued by trying to “emergency” his way into obtaining funds for his vanity wall.

On one hand, the Obama administration negotiated a treaty with Iran to (I repeat) unfreeze their assets in return for a stop to all nuclear pursuits. According to independent monitors, Iran was keeping to the deal, even after Trump nixed the US’s participation in the treaty. Foreign policy and treaties are the prerogatives of the Executive Branch, so Obama did nothing unusual in that regard.

On the other hand, Trump is claiming an emergency when there clearly is not, in an end-around attempt to circumvent the powers the Constitution grants Congress; to allocate money for the government. He is attempting to spend money “for security,” although there are far more efficient and productive ways to use that same money, which the Democratic-led House is all for.

So Trump is usurping the Constitution so he can make good on a campaign promise and the country gets $5-billion white elephant with Trump’s name on it. Sounds like a guarantee that he’d be sued over that. In fact, he was probably counting on it… He didn’t name those two partisan judges to the Supreme Court for nothing. I’m sure he’s counting on all Trump-related SCOTUS decisions going his way for the foreseeable future. 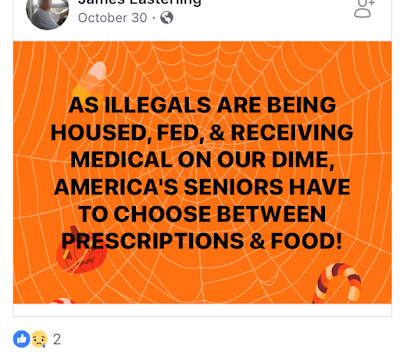 Another Facebook status, another false dichotomy. This isn’t an either/or situation so there is no choice necessary. I could end there, but there is still much to debunk.

“Illegals being housed and fed… receiving medical” Sounds like the lap of luxury, but in reality, they are being “housed and fed” the same way prisoners in jail are. It’s not exactly Club Med; it’s the bare essentials to keep people alive. And this is AFTER ripping their kids away from them under false pretenses.

“Seniors have to choose between prescriptions and food…”
And who is it forcing this choice? The same people who are trying to cut and/or privatize Social Security, so they don’t have to pay back the trillions borrowed from it in the 80s. And trying to keep the minimum wage from rising to a living wage. You think seniors working part-time jobs are making $70k with stock plans? Minimum wage isn’t just for teenagers and that’s been the reality for decades.

Do the Republicans have any proposals to help seniors? Nope… snake-eyes there.

Basically, this comes down to carping about the perception that brown people getting something for nothing. 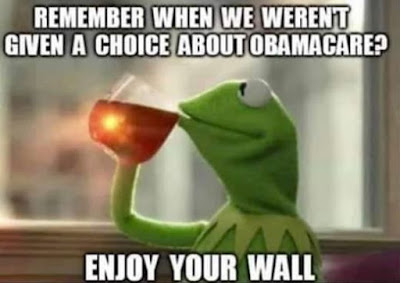 Obamacare: Months of hearings, testimony, and negotiations, multiple proposals, while Republicans moved the goalposts every time a deal was near. (And remember, this was entirely a Republican idea first proposed in the 90s and executed at the state level by Republican governor Mitt Romney in Massachusetts.

Eventually, the 60 Democrats, many of which had just been voted into office for this very purpose, ended the filibuster threat so the bill could pass and go to the president for signature.

Yes, Republicans were given a choice and they chose to obstruct every idea (even their own) that was put forth by Democrats. They don’t get to whine about it later.

Trump’s Vanity Wall: A president flouting the Constitutional powers given Congress, to redirect money marked for other services, to the least effective means of border security, by calling it an emergency even though there is nothing close to one going on. 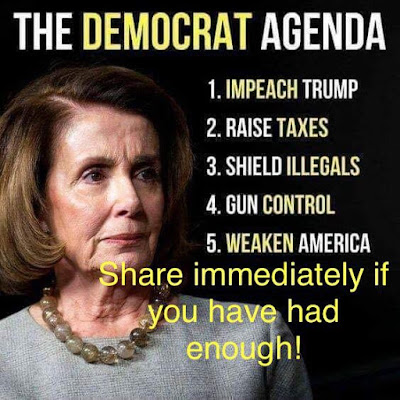 1)      Not an agenda item going in, per Pelosi herself. She is on record as wanting to wait to see where the investigations go before calling for impeachment. No wonder Republicans don’t understand it. They’re used to starting with the conclusion they want and working backward to find reasons for it.
2)      On the super-rich. They always leave that part out. Democrats’ entire goal is to provide meaningful tax relief to those who got screwed with the Trump tax bill.
3)      From what, their kids? It’s a matter of priority, and it’s not a sane one to spend law-enforcement resources rounding up people who are not a threat to anyone or anything. Until Trump changed their orders, ICE was supposed to pick up criminals … dangerous, crime-committing people, not those who overstayed their visas so they can continue to do menial labor our own people won’t do.
4)      If it’s about a gun, conservatives call it gun control, because it sounds scary and Big Brother-ish. The actual agenda is to try to put a dent into the number of people slaughtered by guns every year, by trying to keep terrorists, criminals, domestic abusers and the mentally unstable from buying killing machines. By banning them? No, by doing thorough background checks. What bastards!
5)      If America is so “strong” right now, why do you need all the guns? This is just a Trumpian tic where everything is divided between weak and strong. “Me strong. Them weak. MAGA!”

Lastly, the possessive of Democrat is Democratic. This is America, speak English, will you please? 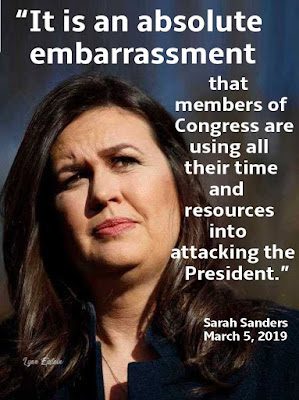 Seriously? Were you alive between 2009 and 2016? We’ll give Trump the same amount of respect that you teabaggers, nut-jobs, moralists and rich-apologists gave Obama. 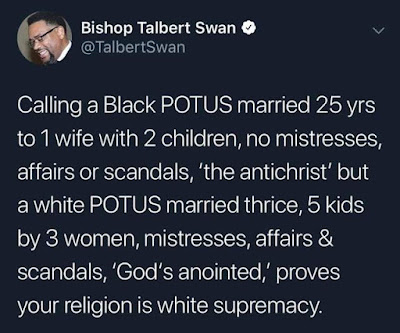 It’s like a mass wave of amnesia washed over Republicans, wherein they completely forgot about the abuse heaped on the last president and his family. You don’t like it rough now? You started it, Trump, in particular, with his racist birtherism nonsense. 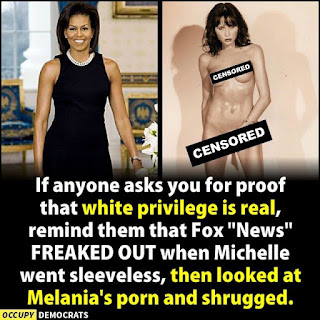 Michelle got raked by the Right for occasionally going sleeveless and daring to ask children to eat their vegetables. “Ape in high heels,” that was one of the quotes, wasn’t it?

I haven’t heard a peep from a single conservative, ever, in judgment of Melania’s past. (Not that I think anyone should… I’m just highlighting the comparison.)

They should just put it in the Republican National Platform: “It’s only wrong when a Democrat does it.” 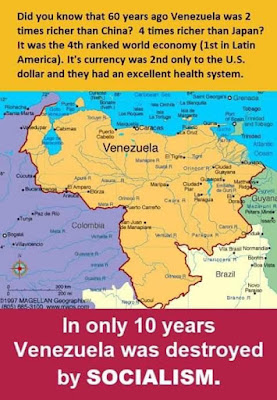 If socialism was the problem, then I guess Denmark, Norway, Sweden, Finland, and Canada will become dictatorial hellholes any day now. A... n... y... day now.

OR, maybe it was a matter of corrupt people coming to power.

Classic logical fallacy… because B followed A, then A must have caused B. 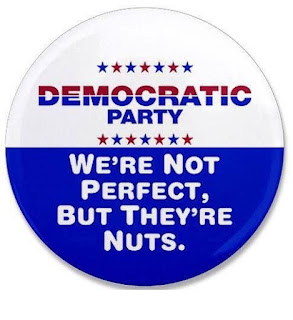