We've Waited This Long, Why Not Wait a Little Longer?

At long last, the famed Mueller Report came out last weekend, with not so much a bang as a whimper. No more indictments, no serious charges, no conspiracy with the Russians to influence the election.

The reason for the whimpering is that no one really knows what’s in the report yet, aside from Attorney General Burr. All he’s released thus far is a four-page summary which he (or his staff) wrote.

Here’s a guy who was on the record as having been opposed to the investigation from the start and was later hand-picked by Trump to take the AG job. I guarantee that both sides of that last sentence were intertwined like a snake on an octopus.

Is there anyone on Trump’s staff that hasn’t lied to the American public on his behalf? It’s practically a job requirement. So with an issue this big and the possibility of severe liability to the president, how can we possibly trust anything AG Barr has to say about the report?

As far as I’m concerned, we know nothing and will continue to know nothing until the full, unredacted report is released (or leaked).

Obviously, Trump and the Republicans are doing the “No Collusion Mambo” up and down the steps of Capitol Hill. That’s meaningless, as well as being true to form. 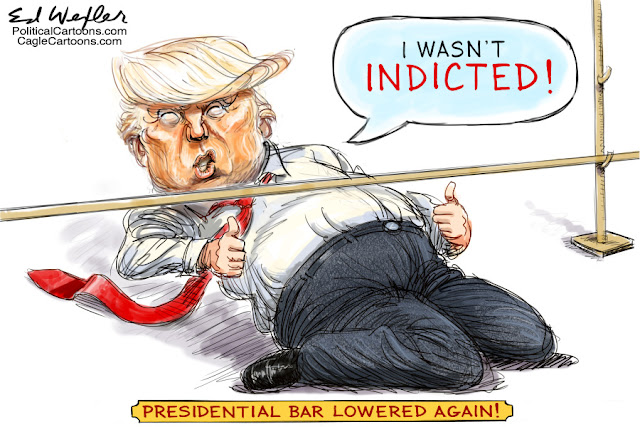 Trump has been barking about being vindicated with the release of every Mueller document, indictment, briefing, or horoscope, whether it addressed the collusion issue or not. It wouldn’t surprise me that Trump issued a tweet claiming the last full moon was proof that he didn’t collude with the Russians OR witness any peeing hookers. He knows full well that repetition = perceived truth and that facts don’t enter into it.

The document itself says “this report does not exonerate the president.” So naturally, Trump claims exoneration. That’s the modern political paradigm in a nutshell.

It’s going to be up to the House of Representatives to get to the bottom of the report, either by subpoenaing the AG to release the report in full or deposing Mueller himself.

The sticky question the Republicans will have to answer is: “If the report clears the president, why hold it back?”

People only hold back things like this when there’s something they don’t want the public to know. And remember, it was only up to Mueller to gather findings. Those findings were presented to the AG for interpretation as to whether crimes were committed. But there was zero chance this Trump stooge was going to determine there was criminal activity committed by his boss. To do so would invalidate the reason he was put in the job in the first place.

If they release the full document, other legal experts can chip in with independent opinions which may contradict the finding of the Stooge General. That’s the last thing the administration wants. So the stonewall is on.

I also wonder why, if there was legitimately no collaboration with the Russians, what were all those people lying about when they perjured themselves? The Trump indictees must have known some pretty serious things for them to risk lying to Mueller’s team or to Congress. I mean, Trump, himself, no longer differentiates his lies from truth, but what’s the excuse for the rest of those clowns?

So, like I said, there’s no sense in getting caught up in this little piece of performance art. Only when the full report comes out, by hook or by crook, will we know what really happened.

Meanwhile, the president can turn his attention to what’s really important to the American people… prosecuting Saturday Night Live.

Director’s DVD Commentary: This is just my view from the bleachers. For a top quality deep dive into this mess, check out this post from the Booman Tribune.
Posted by bluzdude at 6:15 PM

Aargh!!!!!!!!!!!
In other news. A baseball game is happening Thursday and I won't have to see TV other than this. I am so damn sick of this man, his followers and his enablers.
We are living in hell.

I agree. We need to see the full report. If tRump feels all exonerated he should have nothing to fear.

He wants to release it, but it's under eternal audit, like his tax returns.

Longest audit in the history of the IRS!

History will show us living in the American equivalent of the Dark Ages. Especially if we never take meaningful action on Climate Change, and some of these dire predictions start to come to pass.