In another campaign of mass distraction, it looks like in addition to the fear of gays and brown foreigners, the Republicans are going to fall back on another conservative greatest hit, abortion. They’ve been warming up the disinformation machine already.

As a result of states like New York and Virginia firming up reproductive rights, the GOP has taken to twisting reality in describing the horrors of late-term abortions.

While they get their rabid base all stirred up with graphic verbal depictions of what they think happens during such a procedure, they completely ignore the bigger picture. And reality.

Women don’t wait until late in their pregnancy to have an abortion because they just haven’t gotten around to it. These things become necessary when there is a grave threat to the mother or they know the fetus has a life expectancy you can time with a stop-watch. It’s a horrible tragedy that no one should have to face, let along be browbeaten about it from people who have no business butting in.

So, the prospect of the Smaller Government Brigade presuming to step in and demand access to the patient/doctor conversation is the height of hypocrisy.

The people making these ghastly speeches know this too; they just don’t care. It’s much more important to them to get people riled up for an election year than acknowledge an inconvenient truth. Last time it was selling baby parts. Now it’s murdering infants for shits and giggles.

I’m amazed that I still have to write about this issue. (The first time was here.) (And more recently, here.) For something that’s been settled law since the 70s, the Republicans have found a myriad of ways to chip away at Roe v Wade, so that even if it can’t be overturned, it can be rendered functionally impotent.

They create building requirements that apply to no other healthcare business. They create requirements for the doctors to have admitting privileges to local hospitals (which they then harass into refusing all such accommodations.) They pass laws requiring doctors to read or hand out factually incorrect statements to patients seeking to end their pregnancies, as well as invasive, medically unnecessary tests as a prerequisite. Once they thin out the number of offices that will perform abortions, they legislate waiting periods which often require multiple trips over long distances. They make sure that crowds of shouting, sign-waving busybodies can physically harass and intimidate anyone who enters a clinic, regardless of their intent once inside.

All of these barriers are created to deter women from having abortions. None of them protect women’s health in any way, as proclaimed by the barrier builders.

I know that as a man, my voice comes with an asterisk. However close I’ve been to this issue, every woman on earth is closer. If I were a woman, I would lose my mind on this issue.

“How dare some sanctimonious schmuck try to tell ME what’s best for me and my family? How dare some moralistic prig insert themselves into MY family tragedy? How dare anyone other than me and my doctor think they have the right to utter a single syllable to me, let alone set up more hoops for me to jump through because my personal decisions run contrary to theirs? And if heaven forbid, my doctor tells me that if I should carry this baby to term, I am likely to die, I’m supposed to consider some legislator’s moral stance? FUCK. YOU!”

I would have a lot to say to these people and it wouldn’t be very ladylike. Good thing for my sanity that I’m not female and I am well past my childbearing years.

Nobody is “for” abortions, as Republicans loathe to acknowledge. Pro-Choice people ARE opposed to letting strangers substitute their morality for ours when we have a personal crisis on our hands. They want us to dance to their tune and then they go waltzing off while we deal with the consequences alone.

Their “Right to Life” boils down to their demanding their right to interfere in your life. Moralize, judge, condemn, then offer no help whatsoever. 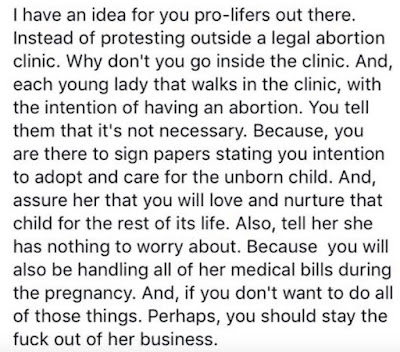 Here’s how you tell that the conservative “Pro-Life” agenda is all about controlling women rather than the admirable goal of reducing the number of abortions.

If they really wanted to lower the instance of abortions, they’d be out in full force to provide birth control, the Number One factor in minimizing unwanted pregnancies. But they don’t really care about that. 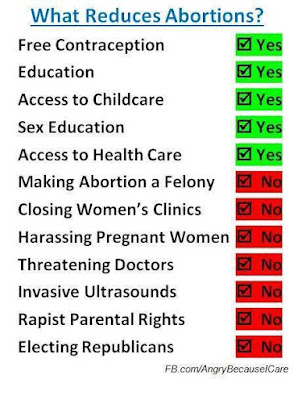 Were they really incapable of understanding that a couple dollars spend on birth control saves hundreds or thousand later in other costs, like SNAP, WIC, medical costs, foster care reimbursement? Of course not. But fiscal responsibility wasn’t their goal.

No, the real goal is to keep a foot on the necks of all women to prevent them from usurping the place of the white male. Or gaining any real political power. According to at least one Republican lawmaker, women are merely “hosts.” Incubators, if you will, for man’s offspring. Hell, women are lucky Republicans even allow them to vote.

And by listening to the speechifying coming from the Right to Lifers, it’s clear they intend to lie, distort, exaggerate and fear-monger to trick people into exchanging their own right to self-determination for the right to be told by strangers how and when to bring children into the world.

But let’s not protest too loudly though or we might encroach on their freedom of religion and we wouldn’t want to do THAT... Someone might take offense.

Late Note: I just noticed that this week, Catholics of the world will welcome another Ash Wednesday. As a boy, I never minded getting ashes on Ash Wednesday. But I would have minded it a lot less if the priest would have put out his cigar first.

Now, as a Recovering Catholic, please allow me to help decipher the various smudges you may see on the foreheads of practicing Catholics. 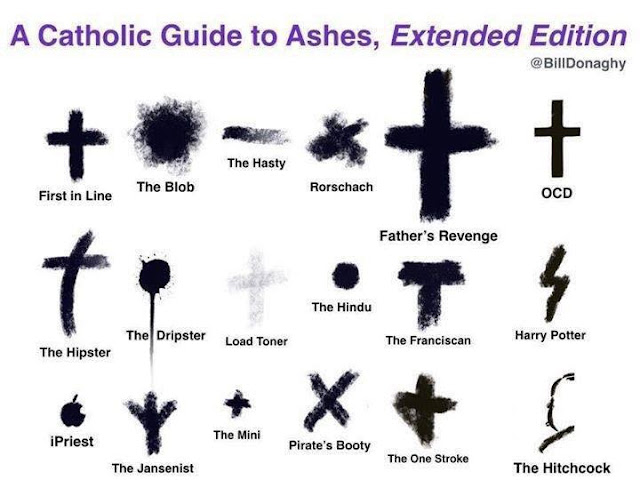 Yeah, it's odd the way that, just when you think the issue is down to a dull roar, it comes back with a vengeance and with the same old myths and stereotypes.

Shouldn't they be out touting how great their guy is going?

They know they can't win on a ticket touting the big tax cuts that the 1% got, so they have to come up with emotional, scary stuff to persuade people to vote against their own financial self-interest. Gays who are gonna molest your children... Aliens who are gonna rape you, rob you, and take all the jobs. Socialism, which is gonna turn us into Venezuela.

The Boogeyman is effective because it appeals to people's fears rather than intellect. The primal response wins.

That goes right to the heart of a key passage in the Book of Bluz, "Bluz 3:17... When in doubt, mind your own fucking business."

Obviously, these prigs have no doubt, which is a huge problem when facing the moral dilemma of our time.