Hopes for the show-trial to end all show-trials blew up over the weekend with the “suicide” of Jeffery Epstein, accused child molester and boss of a human trafficking/sex slave operation. I understand the investigations into his business dealings will continue but now we’ll never be able to see him on the stand, to not only answer for his activities but naming names under oath, of those who participated in his particular brand of “live entertainment.”

Now, let me get out in front here and say that I don’t think anyone snuck into his jail cell, subdued him into silence and hung him by the bedsheets (or whatever it was he used). I think he killed himself.

But I don’t think there’s any way that the path to off himself wasn’t cleared from high above. Otherwise, the level of incompetence would have to be so high that everyone associated with that prison should be fired. Even people who wrote letters to prisoners. I mean, there should have been a bull sitting outside his cell 24/7.

Meanwhile, he was ON suicide watch, then taken OFF suicide watch at the end of July. Why was he taken off in the first place? Hell, he’d be voted Most Likely to Snuff It in Prison, practically unanimously. And still they were supposed to check him every 30 minutes, right?

And they had video cameras, but they were not pointed at cells, not even his. In what world does that make any sense? Why waste time and money watching the hallways when the cells are where the action is?

And if this was all due to an inconceivable dereliction of duty, don’t you think the Justice Dept (or whatever governing law-enforcement body was in charge) knew the conditions there beforehand? So why was such a high-profile prisoner to such an under-staffed and ill-conceived detention center?

I fully believe that someone who had a lot to lose and was knee-deep in Epstein’s “teenage outreach program” paid off whoever it took to get him in that very place.

And then, maybe someone sent word, (by emissary, probably), to make the Godfather II offer that Tom Hagen made Frank Pentangeli. Remember that scene in the jail, when Hagen tells the old Capo about how in Roman times, if captured traitors killed themselves in prison, their family would not only be spared retribution but be taken care of? 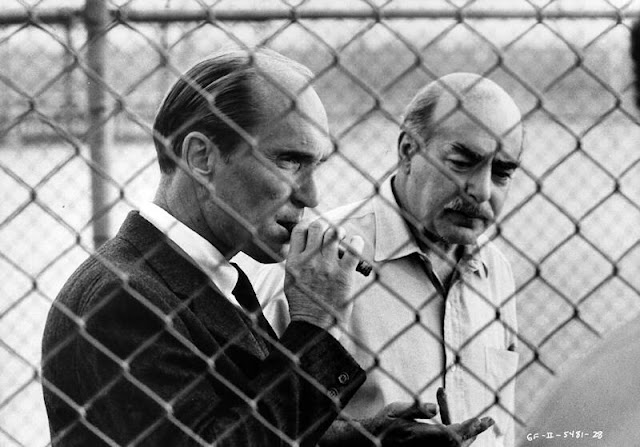 Then Pentangeli promptly went back to his cell and cut his wrists.

I don’t know if Epstein had anyone in his life he cared about, so whether it was the Pentangeli gambit or the educated guess that this rich bastard would not be able to cope with spending the rest of his life contemplating the cold steel bars of a prison cell, someone made sure he was in a place where he could take the coward’s way out.

The identity of that “someone” is now the subject of a great deal of social media speculation. Powerful people on both sides of the political aisle have been tied to Epstein, including President Clinton and the Current Occupant. The conspiracy theories are spewing from all corners. Conservatives immediately jumped on the Clinton angle, especially given the history of people from their circles getting killed, and there’s no conspiracy alive they won’t try to pin on Hillary.

But one thing I learned, when looking for the pic you see above, is that Trump mouthpiece Roger Stone already brought up the Pentangeli angle in 2017, in reference to Mueller's Russia Investigation.

“If you testify, you’re a fool,” he told an associate as House investigators scheduled an appearance in the probe of Russian election meddling. Instead, Stone told his ally he should pull a “Frank Pentangeli.”

So, this is not a new idea in the Trump Brain Trust and Alibi Headquarters. And Trump’s legal toady and apologist William Barr is in the perfect place to pull the strings that put Epstein in just the right place to execute this “strategy.” Just sayin’, this one quacks like a duck.

Social Circles
Have you seen how 45 is now trying to come up with an Executive Order to regulate how social media outlets, like Facebook, Twitter, Instagram, etc., curate their sites and pull offensive material?

It’s funny that when these sites act to curtail hate speech, it’s seen as an anti-Republican move. “Hate” is their brand now and they’re leaning into it.

But here’s an angle I haven’t seen addressed… What if this is part of a plan to pave the way for the Russian troll farms to influence voters the way they did in 2016. We’re onto them now and the big operations are working to suppress their attempts at mass persuasion.

It worked well enough that Americans elected a bankruptcy-laden businessman with sexual harassment tendencies and zero ethics, so I’m sure they don’t want to lose that tailwind now.

Of course, it may also come from Trump being butt-stung when Twitter deactivated millions of Twitter bots and he lost a big chunk of his “followers,” to fall further behind Taylor Swift and Ariana Grande.

Spamalot
Now, I want to ask if you might help me out and explain something to me because I haven’t been able to find a satisfactory answer online. I’m primary asking other bloggers but will take input from anyone.

I don’t know about you, but I get overrun by blog comment spam. I’m sure you know what I’m talking about. It’s those pointless blog comments made up of mealy-mouthed praise (or criticism), questions about the blog service, comments on the color scheme, and always in awkward English, like it was written by a knockoff version of Google Translation. They’re always anonymous and never show up on the Statcounter hit tracker.

Here’s one I got this afternoon:
“I know this web page provides quality depending
articles or reviews and extra data, is there any other web site which provides these kinds
of information in quality?”

Every once in a while, I’ll get one that has a link to whatever service they’re hawking. But most of the time, there is no link or call for action of any kind. Obviously, I kill all of these comments via Moderation, because I won’t have this written excrement on my site. (Say what you will about my own content.)

My question is, what’s the point? Why go through this operation to leave a semi-literate comment about nothing? What do they these mutants or bots hope to accomplish, other than irritating a blog owner? I just don’t see where the payoff for this particular scam comes from.

I’d love to hear any explanation you can provide.

I agree with you, and while there does appear to be some inept behavior at the prison, even having someone other than prison guards watching the halls, someone wanted to help an already downtrodden man to complete the suicide act with that prison sheet. This is a man with millions who realized those millions would no longer protect him, and he would spend the rest of his life in prison. Now we're left with one big word - conspiracy, and the same thing that's going to finally cause all the people who worked with R. Kelly, and even 1 or 2 parents to have to answer to legally. Protection is off the table at this point. I don't talk about politics online, but I can speak for hours and hours about sexual harassment, abuse, domestic violence and human trafficking. Ironically, I've seen these scenarios played out on Law and Order SVU - a lot. The fact that this type of heinous behavior has been going on and continues to go on is very disheartening.

LOL! Certain posts get spammed, and ironically it's the ones where I talk about domestic violence. At first, it bugged me, because I had to delete all those dang things, then I ignored them, and for the most part they seemed to have drizzled off. I don't know what the purpose of it is either. Maybe they hope we click on it, and something will happen??? I feel your pain. Hugs, RO

I get the spam on just about every post. But it's funny when it starts coming in on the old ones. Sometimes I have to go in and turn off the comments. It's just a pain in the ass to deal with.

And I have no idea what they have to gain, other than wasting a minute or two of my time.

Otherwise, the level of incompetence would have to be so high that everyone associated with that prison should be fired.

Can't be ruled out. This fish has had two and a half years to rot from the head down. And we now know that the guards there had been hugely overworked. Maybe there had been personnel cuts to save money.

If anyone used bribery to get Epstein off suicide watch, it might have been Epstein himself. He was pretty determined to off himself.

The Republicans are being pretty blatant about opening the way for more Russian election interference. And Trump gets "butt-stung" about any negative coverage of any kind. He'd impose Putin-level control over the media if he could.

I get those goofy spamments too (mine call me "fastidious" a lot, for some reason). I don't know what the point is either. Maybe they think bloggers will accept them because of the compliments, and get used to them, and thus not notice an occasional one that does contain a link to something malicious? Remember, they're doubtless automatically generated. Posting a million of them on ten thousand blogs costs no human time or energy, and I'm sure no human is bothering to monitor which blogs accept or delete them.

Turns out Epstein's guards were asleep on the job and falsified their logs of checking on him.

It just seems that if a bunch of rich guys desperately want something outrageous to happen and then it just "happens," out of thin air, that's a pretty big coincidence to swallow.

I hope someone is checking the banking, phone and email records of these "guards."