I saw another Facebook status that pissed me off last week: 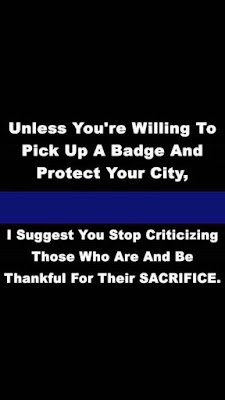 In other words, “Stop crying or we’ll give you something to cry about.”

How nice to be immune from criticism from anyone who isn’t doing the job themselves.

I understand that it’s a dirty and dangerous job, and we owe a lot to our police officers. But is it too much to ask that they do their jobs without arresting innocent bystanders or beating the shit out of people in handcuffs? Or shooting people who are running away from traffic stops? Or rolling anyone who looks like they have money?

The funny thing is, right after I saw the meme, I read an article in the Baltimore Sun about how the Baltimore City police are now afraid to make arrests because they’ll get in trouble.

So many things set me off.

“Many Baltimore Police officers say making an arrest can be nerve-wracking because they feel overburdened by documenting even necessary force, they worry they will be harshly punished for their actions and they don’t feel supported by commanders.”

You know, I’d really like to knock the crap out of that guy, but I just don’t wanna do the paperwork.

“’ They’re ready to throw police officers under the bus to appease the media and don’t support us even when our actions are appropriate,’ one officer was quoted as saying”

The media would be falling at their feet if they could start locking up bad guys without the eventual civil suit settlement for unnecessary violence. I don’t know about the internal review apparatus, but if their actions are justified, there shouldn’t be a problem. And I mean “justified” to an average person, not to another cop going, “It wasn’t THAT bad of a beating,”

All they have to do is release the body-cam footage at the soonest possible time. If the cop is justified, like the suspect is going crazy and inciting a fight, it will be plain as day (as long as there is no “selective editing” by turning the cam on and off at crucial times). Sometimes, some of these guys are asking for it and I don’t think there’s that much of an outcry.

“Another officer said police were ‘afraid to arrest anyone’ for fear that too many documented uses of force would be used against them.”

I’m sorry, if it’s justified, regardless of how many, it shouldn’t be a problem, although one might want to know how a single officer always seems to catch the “justified.” And if it’s not justified, well that’s the freakin’ point, isn’t it? To weed out the cops who are dealing out unjustified force.

I like the new Commish. He says he responds to such complaints by telling them “that the law hasn’t changed. Rather, the expectations are raised and officers will now be held accountable.”

But that’s the problem, in a nutshell. For the past 20 years, the Baltimore City police have had carte blanche to crack heads, plant evidence, and go on their merry way. Usually, there was no one to say otherwise, other than the one with the cracked head. And who was going to believe some criminal over an officer of the law?

Cell phone video changed all of that. Now there is independent, corroborating evidence showing cops cracking people at the drop of a hat or comment. They need to realize that the old days are over and they need to act like the public servants and role model’s they’re supposed to be.

I keep mentioning this because it’s vastly important, but this “above the law” behavior is so ingrained, they keep doing it even with Justice Department officials are riding in the car with them while they were formulating the Consent Decree.

I know that I’ve never been a cop and wouldn’t have been if I could. And I know that they’re the first people I’m calling when I hear someone coming in the door. People always complain about the cops until they need one.

But that doesn’t mean we can grant this group of people a broad license to do whatever they damn well feel like doing and operate like the unelected King of their Domain. They’re supposed to uphold the law, not break it when it’s convenient or hurt people just for fun.

For those feel this expectation of lawfulness is just too restricting, they can always apply for a job with ICE.

You aren't a cop, so you have no right to complain when we shoot a 12-year-old boy with a bb gun or choke a man to death for suspicion of selling cigarettes, or break a man's neck in the back of a police van because he annoyed us by running, etc. You just don't understand what it's like. If we're going to be criticized every time we murder someone, I mean, why are we even doing this job anyway?

It shouldn't be controversial to ask cops not to shoot unarmed people or plant evidence or arrest people on trumped up charges or beat the hell out of them when they're in cuffs.

The fact that so many don't seem to think that's wrong is the problem.

Many years ago, I worked in a group home for young boys, and we always had to be partnered up with a second person. My partner happened to be a NC police officer who was moonlighting for extra cash. He was super funny, but he also had an an extremely aggressive personality. In fact, when I first met him, I was intimidated until I got to know him. He never used violence with the young kids even when they tried to become violent with him, but his demeanor kept them in line. However, he said there were times that he knew he overreacted when he was on the job, but felt he had to save face once he got started, so that other cops would respect him. He didn't mind showing off back then. I asked how many complaints he received from citizens in the 10 years he worked there, and he told me about 5. Back then he said it was easy to justify the complaints because there were no cameras to tell the whole story, and there were some instances he wishes he would have responded differently. I spoke to him recently. He says that if he were still a cop today, he very well may have been fired for many of his controversial and aggressive actions, and admits that all those cops who are doing the wrong thing now should be held accountable for breaking so many laws. I agree. Hugs, and another great topic!

Thanks for the "inside" insight.

Sounds like he was a product of his environment, what with not wanting to lose face in front of other officers. That was the Blue Code, which is still in effect. Cops who violate people's rights will never be exposed when their teammates stay silent.

Cops like to tell the neighborhood people to come forward as witnesses and break the "Stop Snitching" taboo.

They need to lead by example.

Great post! I admit I laughed out loud at my desk when you wrote "You know, I’d really like to knock the crap out of that guy, but I just don’t wanna do the paperwork."
I feel like that daily and I'm not a cop.

I wish that all WE had to do to get away with knocking the crap out of someone who needed it, was to fill out some forms.

I wonder how someone requisitions that paperwork... "Hey Jackie, we're out of the Wood Shampoo forms!"

Unless you are willing to pick up a club and protect your city from murderous policemen, I suggest you stop criticizing those who are.

I'm a 62 year old white guy, and I would hesitate, at least, to call the cops if someone was breaking my door down. The first thing I'd do is see if the cols were doing the kicking.

Giving you the benefit of the doubt that you hadn't done anything, it wouldn't be the first time the police kicked in the wrong door.

Not without a helmet!