Republicans still haven’t accepted that their Grand Poobah has really gotten his tail caught under the rocker this time. They’re still out there trying to defend the indefensible. The current tactic is to divert attention. 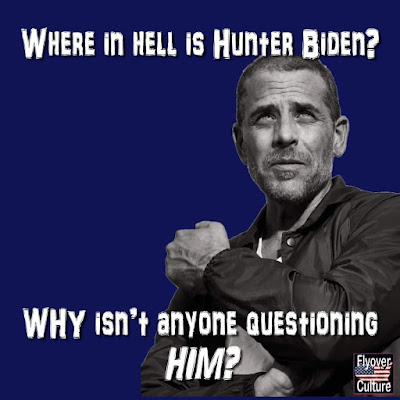 Do they really want to poke this hornet’s nest? It seems to me that all politicians are ripe for familial investigations into the lives and bank accounts of their privileged progeny, especially Republicans, who have been stacking their people in government jobs and on corporate boards for decades. Just look at today’s most visible: 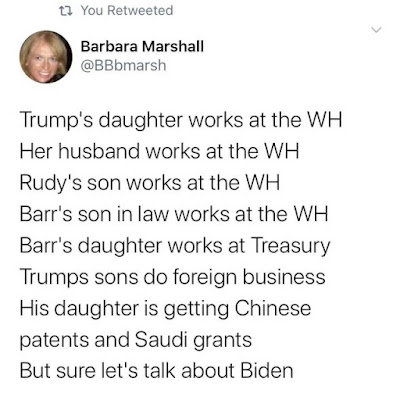 Maybe someone can explain to me how Hunter Biden is any different than any other offspring of well-heeled politicians. But it seems to me that it’s just another freshly made up requirement that only Democrats have to follow.

You want to restrict family of political figures getting rich or powerful off the family name, pass a law. I would support it. But until that happens, it’s nothing to even get heated up about, let alone absolve the president from his admitted treason.

Straight from the Troll Farm
This one pisses me off just because there’s so much wrong with it. 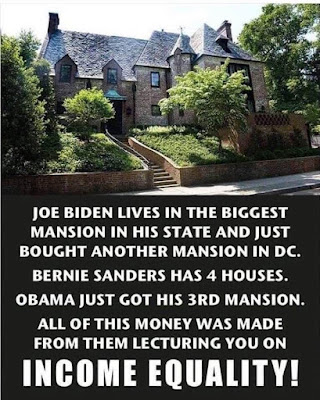 1) Do we really know that’s Biden’s house? Could be any big house in a nice area.

2) THAT’S the biggest mansion in the state? I doubt it. If that’s in Pennsylvania, I know for a fact that there are athletes with bigger spreads. If it’s Delaware, I still doubt it, because of the state’s status as a tax haven. I bet lots of wealthy people live there for that very reason.

3) How do we know Bernie has four houses? Because some meme says so? A quick Google check says he has two homes in Vermont and a townhouse in DC. Are they counting the Senate as one of his houses?

4) The Obamas have one mansion and are in the process of buying another. Plus they’re looking at a third in the area of their daughter’s school. Nope, haven’t “got their third.”

5) No one made their money by lecturing on income inequality. That may be a part of their overall political messaging, especially for Bernie, but the statement here is a gross oversimplification.

All those points are really just nits. The biggest issue:

6) The meme creator is attempting to show the hypocrisy of rich people talking about income inequality while being rich at the same time. That’s really a misdirection because none of the people named in the example are what you would call hirers. While they may have their own personal staffs, (whom we have no idea what they’re paid), they do not run businesses, factories, retail outlets, construction or agricultural jobs. The point of those condemning income inequality is the discrepancy between the millions made by those at the top of a company versus the slave wages paid to those at the bottom.

They’re talking about a system that normalizes millions of dollars in bonuses being paid to executives of failing businesses. They may be closing stores and plants and tossing people out of work, but the top guys are still walking away with their bonuses and stock options.

Now if the Walton family were out there talking about income inequality and were listed on a similar meme, that would be a valid complaint. But let’s not kid ourselves, the Waltons are the poster children for suppressed wages and dead-end jobs. Their Mission Statement is income suppression. They think that’s how it’s supposed to be.

How to be Sexist AND Ignorant 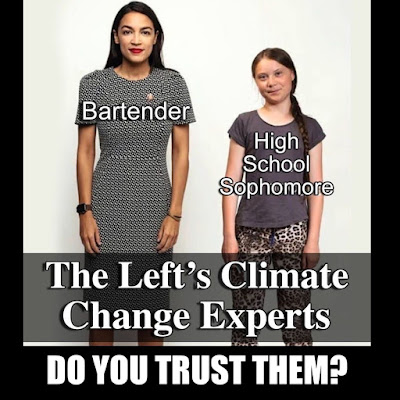 Diminishing AOC as a mere bartender is the very height of sexism and racism, not to mention selective memory. Rep. Ocasio-Cortez is a highly educated individual who graduated a high-caliber college with honors, who expresses herself clearly and effectively, so much so that she bounced a career politician from his seat. And in the process, she scared the hell out of the Republican establishment so badly that they do everything in their power to diminish the stature of a freshman Representative; a neophyte who wouldn’t otherwise garner a moment of their attention.

And young Greta? The kid is a powerhouse and any 16-year-old who can give a powerful speech to the United freakin’ Nations in her second language is someone to whom we should listen. When I was 16, I couldn’t find my asshole with both hands and a funnel.

And beyond this raging ageism and sexism, the meme misses still another huge point: These two don’t claim to be climate experts. They merely claim that we should listen to and act on the advice of those who ARE climate experts, who are nearly unanimous in the conclusion that our climate is changing because of mankind’s actions and will cause huge consequences if corrective action is not taken immediately.

The fact that this 16-year-old Swedish girl is getting hate mail for eloquently and urgently stating the obvious says more about male ignorance and insecurity than it does about her.

The knives are out for both women because they scare the powerful rich men who would have to take a financial hit if they were to do anything to positively affect climate change. When rich men get scared, they take action to squash and diminish anyone who would dare to suggest curtailing their profits. In this case, I’d guess they sent word to their troll farm to start sending around the memes to take these two down via social media.

I mean, who cares about lives and property lost someday in the future, compared to a solid 4th Quarter report this year, right?
Posted by bluzdude at 6:22 PM