I Wanna Know, Have You Ever Seen Ukraine...

When you think of all the things or places that could bring down the presidency, who had Ukraine in the pool? I mean, you would have thought Saudi Arabia, North Korea, Iran, Scotland, or a host of shit-hole countries would be the logical choices.

But boy, did he step in it here. This has all the hallmarks of a good scandal: Personal gain, underhandedness, and a cover-up.

It’s funny how the rest of the Republicans are still pushing the Biden “scandal.” This was an issued that had been debunked ages ago. There is literally nothing there.

I can’t believe Republicans are even interested in this kind of scandal. I mean, how would they like to see a survey of where their kids work? At how many corporate boards are their offspring currently sitting? How much scrutiny about political favors and no-bid contracts can they withstand? I can’t believe they even let the subject come up.

Nevertheless, we now have Republicans pushing a “scandal” on their opponents which has zero proof and denying the president’s scandal that has loads of proof, including self-admitted! They’re not just morally and ethically bankrupt; now they’re actually believing their own bullshit.

This meme on it amused me for its sheer lameness: 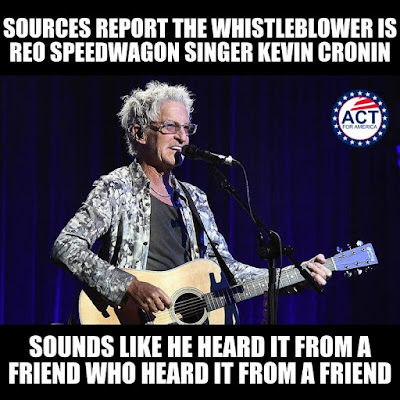 Someone, please explain to these guys that it’s not hearsay if the material has been corroborated multiple times by people for whom it was NOT hearsay… people who heard the call themselves. That’s what the Inspector General said in the “Whistleblower Report.”

Plus, there is the “not-a-transcript” that the White House released which confirms everything that was alleged about the conversation. This meme-ster needs to pull his head from the dark place in which it’s lodged.

Did you hear about the Trump supporters in Congress fretting about how he shouldn’t have released the not-a-transcript? They’re not concerned with the mafia shakedown, they’re just upset it got out. There’s the modern Republican party right there. Better to bury the crime rather than admit it. From the Washington Post, one Republican senator said:

“The transcript’s release was a “huge mistake” that the GOP now has to confront and defend — while the party argues at the same time that House Democrats are overreaching with their impeachment inquiry of Trump.”

That’s too bad… this pesky transcript contradicts the talking points they’re supposed to follow. How can they deny the facts that the White House just admitted? Golly, what a pickle. It’s made it hard to follow the usual playbook: 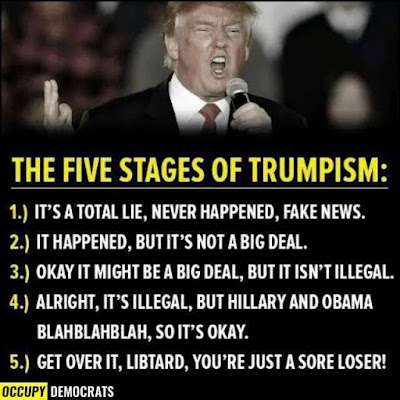 Again, it’s too bad their default position is to alibi for the president rather than confront his illegal behavior. Remember, laws are just for Democrats to follow! They’re only the party of Law and Order when they’re not holding power.

Other Republican senators have been quoted as saying they’d for impeachment if the vote was secret.

Well isn’t that the very definition of superior ethics and backbone? Spineless weasels! They’re more than happy to let terrible precedents be set while the democracy swirls down the toilet, just as long as they get re-elected.

What these Republicans AND wobbly Democrats from purple states need to do, in my humble opinion, is own the vote and lean into it. Come out and say, “No one is above the law, including the president. His own transcript showed he sought election help from a foreign government at the exact time he was holding up millions in military aid. That’s not the way this country is supposed to function. This is a matter of national security and I’ll defend that every time.”

Then, if Republican, throw support behind Pence. Hell, he’s practically the same, only substitute oily religious piety for obnoxiousness.

The other juicy angle on this whole affair is how Trump’s handlers diverted the actual transcript onto an ultra-secure server, which can only be accessed by those with top clearance. Or essentially, tossed into a black hole.

At this point, the hypocrisy factor goes off the charts. 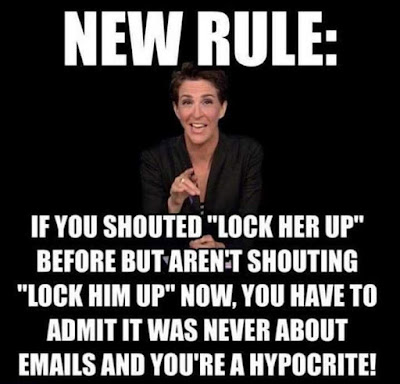 I need Republicans to start explaining how Hillary’s server problems were different or more dangerous to the country than this one.

That, right there, is a 5-alarm, no-doubt-about-it, cover-up. That server was designed for national security secrets… troop maneuvers, battle plans, weapon design… serious stuff. It was not meant to be a dumpster for politically damaging conversations. By all accounts, there were no national security implications in that conversation with the Ukraine president. It was a puff call; just something to welcome the new guy to the table. Until Trump sent it off the rails, that is.

Another thing about the not-a-transcript… Was President Zelensky trying to join the GOP 2020 ticket? I haven’t heard such toadying since the last cabinet meeting at which Pence spoke. Looks like the book is out on how to curry favor with the American president.

Now what’s the outcome going to be for this impeachment process? That’s anyone’s guess. I think the House will impeach, for sure. The Senate is where the questions come in.

Mitch McConnell says he’s required to hold a hearing, but we all know what a dog and pony show that can be. The verdict will not be decided until the Koch Brother says it is. He’ll tell Mitch what to do and Mitch will make it so, one way or another.

It wouldn’t totally surprise me if he allowed the impeachment of the president. The fossil fuel guys know that Pence is one of them. He’s been in lockstep with them ever since he’s been in office… any office. The only variable is whether they can get such a wet blanket elected in 2020. We all know they have enough money to throw at the problem. Maybe they’ll figure he’ll do whatever they want to, like Trump does, only Pence won’t step on his dick every week while doing it.