Impeach Pits
It’s amusing to watch the Criminal in Chief bluster about how his impeachment process is illegitimate. He literally has no legal leg to stand on, because the Constitution puts the entire responsibility for determining articles of impeachment with the House of Representatives. They get to make of it whatever they want.

The fact that the president doesn’t like it doesn’t make it a valid legal challenge.

He wants the impeachment “authorization” vote so he can get some purple-state Representatives on the record and attack them with election ads. And everyone knows that, especially Speaker Pelosi, who has no good reason to give it to him. She’s letting him dig his own impeachment grave with obstruction after obstruction.

Sometimes I think she should just hold the vote, to get things moving. But the thing is, he would just come up with another requirement that prevents him from complying.

And that’s not just a Trump thing… the Republicans made that an art form when trying to get out of that “Grand Bargain” with Obama on health care and federal spending. Every time he agreed to one thing, Boehner (on behalf of the Tea Baggers) asked for something else until the whole deal swirled down the toilet.

I have no reason to think Trump would cooperate any further than he is now, no matter what Pelosi does.

Debate Pt 1
I was disappointed with CNN’s questioners during their last debate, in that they seemed to be pursuing “Gotcha” moments rather than having the candidates illuminate their positions.

This was especially bad when they pressed Elizabeth Warren on raising middle-class taxes to pay for “Medicare-for-all” health care. Now, everyone knows that a program like that will require some up-front capital. Taxes will go up.

BUT, the salient point is that medical costs will go way down, down to zero, in fact, which should more than compensate for the rise in taxes. The Middle Class should net out to the positive.

On one hand, I wish Warren would just come clean and stop evading that question. But on the other hand, she knows what happens if she does… The CNN headline coming out of the debate becomes, “Warren Says Her Health Care Plan Makes Taxes Go UP on the Middle Class!” Fox “News” will trumpet that every day for the next year. 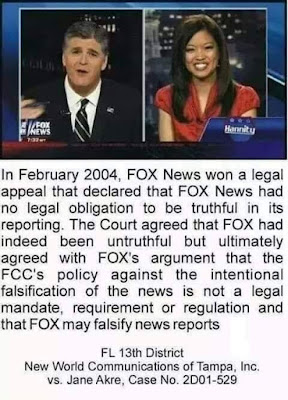 The problem with modern news distribution now is that inflammatory headlines get big clicks. Burying the context in the story doesn’t undo the damage done by the first impression. And often, that’s the ONLY impression. Fox, of course, won’t even bother to add the part about the offset. They’ll just harp on “The Democrat Socialist is gonna raise yer taxes and take away yer insurance!”

Debate Pt 2
It is with similar resignation I saw the reactions to Warren’s point that everyone who built a company in the United States did not do it alone. It’s true. No one accomplishes anything in a vacuum. Everyone needs to use the country’s infrastructure, roads, police, fire departments, snow removal, mail delivery, etc.

Republicans love to mock the “You Didn’t Build This” talking point, which, while inelegantly stated, remains a stone-cold fact. All you have to do is omit the context, a ploy at which Fox “News” is adept.

Every American pays into the pot that provides the infrastructure and services; it only takes a modest sense of decency to accept that and contribute a company’s fair share, rather than park profits in hidden offshore accounts and shell corporations.

The businessmen love to preach “small government,” to keep it out of solving societal problems. But they know full well that if not forced, they, the private sector, will do everything in their power to avoid paying money to solve anything but their quarterly earnings. If the government doesn’t act to solve big-ticket items with money obtained by forcing businesses to pay their share, nothing will ever get solved.

That’s the disconnect between the talking point and real life.

Grift That Keeps on Grifting
There is a lot to laugh at regarding the president’s attempt to grift the entire world by hosting the next G7 conference at his own Doral resort in Florida. And I have to laugh, as opposed to having my brain explode, which is the alternative. Has there ever been a more obvious attempt by a president to enrich himself? AND expect applause for doing so?

Yesterday he reversed himself, blaming (in his usual semi-coherent word salad) the “Media & Democrat Crazed and Irrational Hostility.” In actuality, he changed his stance right after meeting with House Republicans who said they couldn’t support his position.

It’s not that Republicans are against using their elected office for personal enrichment; it’s that they prefer their grift to take place behind the scenes, not on the front page. They can’t afford to let their “base” catch on to who they’re really working for.

Sucks Being Right All the Time
I saw the report this weekend that the Trump State Department ended its 2-year investigation into Hillary’s emails (AFTER the 11 congressional investigations), and to no one’s surprise, found nothing criminal. Most of the stories were reported with headlines like, “Clinton’s email practices were risky but not malicious.” Subheading: “Investigators found no “deliberate mishandling” of classified information by Clinton and her aides”

All they really found were 38 people who could have been more careful in their emailing security practices.

Once I saw that I knew how conservative media would frame the story. And then, as soon as I Googled the topic, there it was on a Fox “News” website: “38 people cited for violations in Clinton email probe.” The article includes no further mention of Clinton being absolved of criminal activity or concluding there was no deliberate mishandling of classified documents.

I’m sure they’re working overtime to find the identities of these 38 agents of the “Deep State. You got to freshen that enemies list every once in a while, or they get stale.

Debunkery: Getting to the Point
Culled from the wilds of Facebook this weekend: 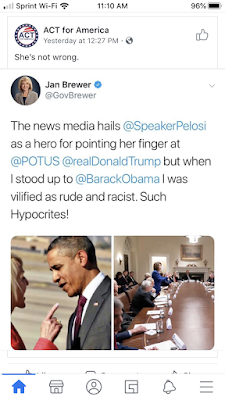 Here’s former governor and nutjob Jan Brewer tying to thrust herself back into the public eye, by showing what a Republican she is by comparing two superficially similar events while disregarding the context that invalidates her point.

On her part, she ambushed a sitting president, wagging her finger at him the moment he stepped off Air Force One before he even had a chance to comment on the dry heat.

As for Speaker Pelosi, she was reacting to being spoken to, to her face, in derogatory terms, in front of a table of her peers.

So, Brewer and Pelosi both had fingers out. There is nothing else even remotely similar about their actions, which makes any invalidates any logical comparison. And if it were me, I’d probably use a different finger.

RIP
The country lost a lion of a congressman this weekend when Rep. Elijah Cummings passed away at 68, and I lost my Representative. I was surprised he was only 68; I thought he was in his late 70s, for sure.

But he was on the job even at the bitter end, signing impeachment investigation paperwork from his bed.

We may be able to elect a new representative in his place, but this person will not have anywhere near his power or influence. His district is losing a powerful committee chairmanship, which a freshman congressperson cannot just step into.

I’m not going to go into a detailed retrospective; there is plenty of that all over the news sites. So let me just leave you with some words about our man Elijah, written by my mom, Poet Laureate of Darwinfish2.

We hear your question
'Did you do right
by our democracy?'

Eternity awaits
a future our children
will never see.

We stand silently
as you dance, smiling
with the angels.