Sometimes you see a news story and it just short-circuits all the wiring in your brain.

That happened to me again last week when I saw this article, wherein Fox “News” hack Mark Levin claimed that in the Trump Administration, “there has even been a hint of scandal. Not a hint.”

If ever a news commentary should come with a laugh track, it’s that one. I’ve heard it said that the Fox “News” crowd existing in their own bubble, but this one sounds more like an iron lung.

Ignoring the emoluments clause and not divesting from his hotel business while foreign entities book rooms they don’t even need, just to curry favor.

Tax irregularities to the point of enduring withering criticism and outrage because releasing the returns would be even worse.

“Grab’em by the pussy,” hanging out with Epstein at his teen model parties, accessing the changing rooms at his own beauty pageants and feeling up the contestants.

Russian election interference on his behalf, possibly at his public invitation.

Scores of indictments and arrests of his inner circle.

Openly courting foreign sources of opposition research on an election opponent (2016 and 2020).

Golfing more than any president in modern history and always at the resorts he owns, which funnels government money from The People to His Pocket. (And this, after constantly criticizing his predecessor for playing too much golf.)

Over 13,000 documented lies told in office, including those that need not be lied about at all.

All this, (just off the top of my head), and not even a “hint” of scandal?

Here’s why the likes of Mark Levin see no scandals here: It’s because self-enrichment, self-gratification and back-room deals are practically written into the GOP platform. They don’t even see it as scandalous. For them to consider something a scandal, it must be truly out of the ordinary.

Like if a Republican were to take a tax break for the rich and move it to the Middle Class. THAT would be a scandal to the money-grubbing power brokers on Fox “News”.

College Daze
I see versions of this all the time: 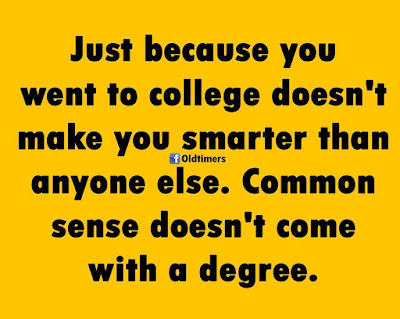 Funny how it’s always posted by conservatives. And I understand why.

Rich Republican donor class is not interested in an educated population. They want us pliable and obedient. They don’t want us to get past their rhetoric and see what they’re up to. So, they under-fund, de-emphasize and demonize education at every opportunity.

Hence you see all the negative stories about coddled students in campus safe-spaces and liberal Ivory Tower professors. They play on tropes like the brilliant nerd with no common sense or social skills. They claim college is nothing but a liberal indoctrination center.

It’s true that college graduates skew Democratic more than Republican, but it’s not because every college is teaching Democratic political tenets. It’s because they teach facts, like, you know, “science” which often come into conflict with the social conservative dogma of the religious right.

College is also a place to learn how to listen and analyze… how to question and use logically sound arguments and identify those that aren't. You can learn how to see through the bullshit thrown at us every day.

So, the Donor Class funds media farms that produce memes like the one above, appealing to the pride of the non-college educated, who dutifully pass it on.

It’s not like you can only be smart by going to college, but it certainly gives you a good head start.

When a party knows that the smarter people become, the less they identify with that party, maybe it’s time to update their platform. Obviously, it costs less just to smear education and cater to the uneducated.

The Dude Does Not Abide
Speaking of seemingly apolitical memes that always seem to show up in conservative Facebook feeds: 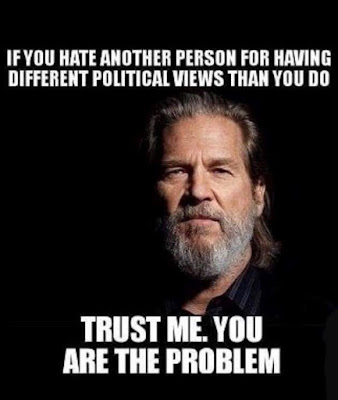 I used to see memes like these more evenly divided but lately, I don’t know if it’s just MY stream, but I only see these pleas for understanding from Republicans.

The thing is, I used to agree with them. Political differences shouldn’t spell doom for family or friendly relationships. But then the Republicans began (or just made more obvious) an ugly march into racism, sexism, and violence.

As far as I’m concerned, pleas for political understanding = “I want to support slashing of human rights, ethnic prejudice, subjugation of women and kowtowing to the rich, but I don’t want any blowback about it.”

I have a significant number of conservative friends. I mean, how else do you think I get these memes I tear apart? So, it’s sad to realize that these friends, many of whom I’ve known since I was a teenager, buy into this ugliness.

Each one would swear to you he’s not a racist. But then, by supporting people who are also overwhelmingly supported by avowed racists, they make it clear that racism is certainly not a deal-breaker. And the same with sexism, homophobia, xenophobia and every other anti-social tenet of modern conservatism.

The ugliness of the Republican Party, as currently constructed, means that I have friends whose basic values, I feel, are so skewed and twisted that I don’t see how I can reconcile that with the person I’ve always known.

The Cure for the Blue Flu
Here’s another example of the rampant, overt corruption of the Baltimore Police Department.

The full story was in the Baltimore Sun this weekend but here’s the Facebook snapshot, which tells the basic story: 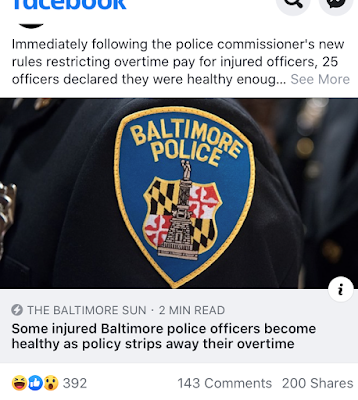 The new police commissioner changed a department policy that allowed injured cops to pull overtime while on desk duty. As soon as he revoked the policy, 25 officers declared they were healthy enough for field duty.

That’s just too rich for words. It almost sounds like a piece from “The Onion.” Overtime has always been one of the big corruption points for the BPD. Wherever you found a dirty cop, you inevitably found he was abusing/falsifying his overtime.

Look, I’m in agreement with anyone who doesn’t want to go out and police the lawlessness that is the City of Baltimore. But then, I didn’t sign up to do that very job. And if one is injured on the job, he certainly shouldn’t be prevented from pulling desk duty. They need to be flexible to help injured officers fully recover. But obviously, there were quite a few who were only on “injured duty” to reap the OT dollars. The OT dries up and look, “It’s a miracle!”

I’ve been saying for the last few years that there is a need for a drastic culture change in this city’s police department. No remedies will take hold as long as the internal ethos is that of shortcuts, unnecessary violence, and corruption. The guy at the top has to change that from within and until that happens, no photo ops, press releases or public events will make any difference. 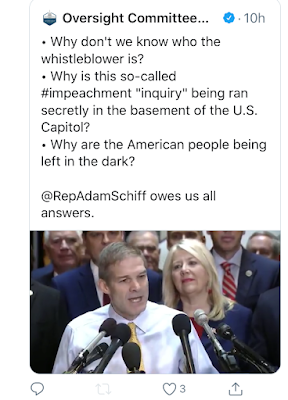 Forget Rep. Schiff, I’ll answer your questions:
·        To preserve his safety in the face of your White Power hooligans and because his identity is irrelevant. Everything he blew the whistle on has been corroborated by direct witnesses and the accused, himself.
·        It’s not. There are plenty of Republicans on the investigation committees and you know it because you’re one of them.  The relevant question is, why are you lying about it?
·        Because you are hogging the spotlight.

There is a reason that college towns are blue. They read.
I wish facebook would not allow any news whatsoever and just be what they started as a way to communicate with your family and friends across the land. Period end of story. These dumb asses only get their news from FB and read no further. Hence trumps base.
I am hoping to move out of this country when I retire. Don't have the stomach for this anymore.

I have to say, among a bevy of candidates for "most punchable face," Jim "Gym" Jordan would be near the very top of my list.

I hate to make fun of people's appearance, but geez, dontcha just want to give that guy a swat? He just looks like a little bitch.

That's another thing that bugs me... people see something that plays to their world view and just pass it on, without the first effort to see if it's true. It's like, "If I agree with it, it must be right."

Hence, the dumbification of our country.

Ha ha ha - no scandal in the Trump presidency? Not a week goes by without a scandal. I grow scandal weary. Could we just elect an adult already?

How do can these guys say stuff like that in public and still be able to look at themselves in the mirror? I can only assume there's a portrait of them somewhere that now looks like a zombie.