If you’ve been conscious over the last year or so, you’ve probably seen ads or info on Cannabidiol Oil, or “CBD.” This is not to be confused with the CDB, or “Charlie Daniels Band,” who I used to follow in The 80s, before ol’ Charlie became the elderly, country version of Ted Nugent.

CBD is a hemp extract that’s supposed to have a plethora of constructive uses, none of which are “getting you high.” Promoters of this additive claim it provides pain relief, treatment for insomnia, weight control, arthritis, mood and calmness enhancement, stress management, and more. The legality of CBD varies by state. 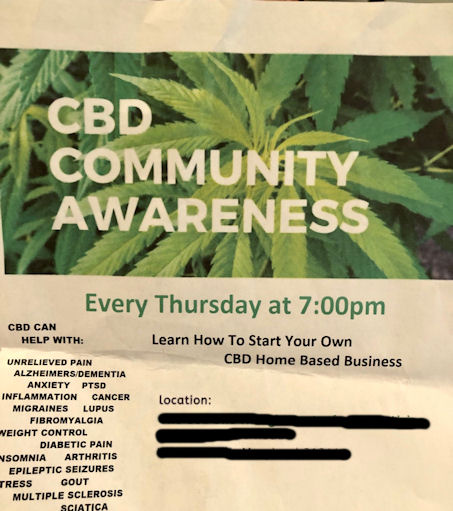 I found this flyer on my windshield last week.

I saw an ad for it on Groupon a month or so ago and decided to give it a try, just to see what happens. I was hopeful it could help Sweetpea, who sometimes has trouble falling asleep when there’s too much on her mind. And I figured I’d give it a go as well, because who doesn’t want a better night’s sleep? So, I ordered a jar of sour gummies with 750 mg of CBD.

Maryland is a medical marijuana state but it’s highly regulated. They still frown on recreational use so we’re not exactly Colorado on the Chesapeake. But CBD is legal.

I’ve never been a pothead. In fact, you could count on your fingers the number of times I’ve taken a hit and still have some fingers left over. It was never really my thing. I was always much more content with a couple of drinks or some cold beers. I think the biggest reason I shunned pot, besides the illegality was that I never liked smoking… anything. I didn’t see much fun in hacking my guts out after a toke. And then you have the Ashtray Mouth the next morning. Who needs it?

I may be falling apart with age, but my lungs are in great shape.

If Maryland ever went “full Colorado,” I’d love to try some edibles; that would be more my speed. I have it on good authority from a senior relative living in a medical marijuana state, that the edibles and oils really do the trick. This relative, who was once completely anti-pot, has found now that it is a great help with pain relief, which allows him to fall asleep easily and stay asleep.

He tried various methods of ingestion, snacks, inhalers, and such, but found the best results from a couple drops of oil extract on a pizzelle, right before bed. He was so happy he found something that worked, without the risk of pulling an opiate addiction.

I asked if it got him high too and he said, “Oh yeah!”

So, my gummies finally came and Sweetpea and I gave them a try. After a brief trial period, I found that taking two gummies had positive noticeable effect. (I later began ordering 1500 mg gummies instead. I’ve seen them as high as 3000 mg as well.)

I haven’t noticed any mood enhancement or pain relief, but I can tell you I’m getting much better sleep. And because I wear a Fitbit to bed, I get nightly sleep measurements. I’ve been getting about double the REM sleep than I was, and more deep sleep as well. When I do wake up to roll over at night, I almost always fall back to sleep immediately.

According to Fitbit, the benefits of REM (or dream) sleep include mood regulation, learning, and memory, as our brains process and consolidate information from the previous day, so that it can be stored in long-term memory.

Here’s a typical night’s sleep record for me. 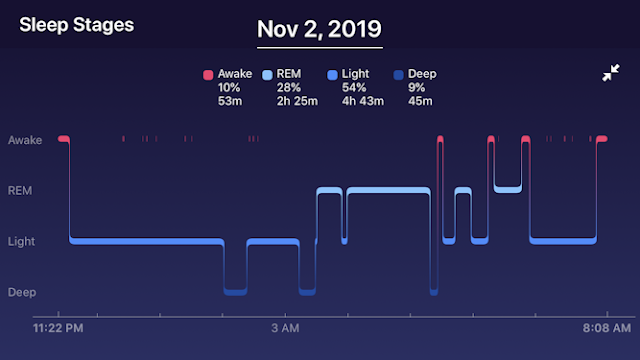 The time awake is exaggerated though. I wake up a bit when Sweetpea gets up or has to tend to the dog (who only seems to want to go out to poop when we’re asleep,) but I’m back out almost immediately. I presume it takes a little time for my vitals to reflect that.

As for Sweetpea, it helps her stay asleep and return to sleep quickly after waking, but it’s still hard for her to go to sleep initially, if she’s got a lot of work stuff on her mind.

So, as far as I can see, CBD is no panacea or cure-all, but it helps get you a good night’s sleep. For this purpose, CBD gets the Darwinfish2 Stamp of Approval.

I should probably warn you though, if you’re prone to nightmares, this may not be the supplement for you. The dreams can be quite prolonged and vivid.

I had one two weeks ago where I realized I’d been shot somewhere in Baltimore and was going to die in the ensuing moments. Surprisingly, I was quite calm about it. Somehow, I found myself at our old house in NW Ohio, where we had The Barn and all our Barn Parties. I was concerned that I’d be leaving all my junk with my parents, who I felt didn’t need the hassle of dealing with all of it. I suggested to my Mom that she have some of the neighbors over to go through my LP and CD collections and take whatever they wanted.

That’s what I was worried about. #Priorities

I just hope when the time comes when I’m facing my imminent mortality, I’m as calm and serene about it as I was in the dream. In real life, I think there would be a lot more cursing and wailing. I definitely see some dramatic hand gestures.

And I’m pretty sure the LPs will be going right in the dumper.