The Republicans seem to be approaching the Impeachment Hearings like Goldilocks… First it’s too private, then it’s too public. I have a feeling the only way it will become “just right” is if they get to turn it into an investigation of Hunter Biden.

Luckily, Rep. Schiff is onto their game and will not allow them to call witnesses that aren’t germane to the subject of these hearings, which is the impeachment of President Trump.

Meanwhile, the GOP is throwing everything they can wrap their trunks around at the wall and hoping something sticks. “Where’s the Whistleblower? Where’s Hunter Biden? Why do the meetings have to be secret? Why can’t Republicans attend? Why can’t the president have his lawyer there? Why can’t we call witnesses to bolster our conspiracy theories? What, we CAN attend? No, we don’t want to now because it’s all a sham.”

The one thing you don’t see is any evidence that things didn’t play out on that Ukraine call exactly like it’s been described in sworn, direct testimony. Nor do you see any of Trump’s inner circle who were also on the call, lining up to contradict the other witnesses. That’s how you know the Ukraine phone call story is true.

These are the people who aren’t showing up for their subpoenas. They know that if they hold the party line under oath, they perjure themselves and could face jail time. (See Manifort, Paul.) Their only play is not to go, hence the bending over backward to throw up objections to the hearings themselves.

I really wish Rep Schiff would start having the courts (or whomever) enforce these subpoenas. Let these weasels “tell it to the judge.”

So now you have all the Trump toadies and apologists out there running their stories about how such a quid pro quo / arms for dirt deal isn’t really a crime because Trump’s been doing this stuff for three years. I also read in the paper this morning that Rand Paul says these deals are “common among a variety of American elected officials” in Washington. In other words, “business as usual.” 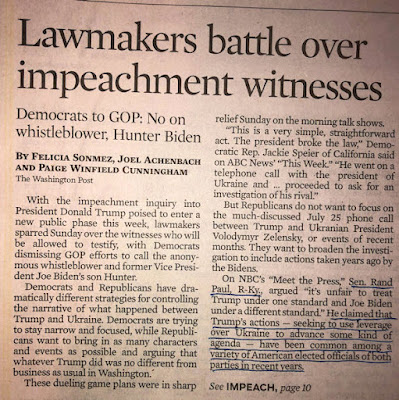 I would agree that it’s BAU in the Trump Administration, but that doesn’t make it legal. You want BAU? It’s political leaders getting their kids on industry boards of directors. They want to make a big deal out of the young Biden? Maybe someone should start looking into the careers of all the other players in town.

I bet you’ll find dozens, if not hundreds, of these kinds of sweetheart deals, starting with the First Family. They better be careful about what they blow up into a big deal. Trump’s unemployment numbers might suddenly take a hit if these silver-spoon offspring start losing their jobs.

Speaking of flights of fancy, I’m amused by the talk of getting Mayor Bloomberg to buy Fox “News,” as something that would be more beneficial to the country than running for president. I’m amused because it’s about as realistic as talk of winning the MegaMillions lottery. It ain’t gonna happen.

Even if Bloomberg wanted to buy Fox “News,” why on earth would the Murdoch family sell it? The Murdochs are filthy rich and have huge influence in the world. If they sold out, they’d still be filthy rich but would no longer have the Fox mouthpiece to broadcast their nationalist, anti-worker, anti-woman philosophy. Where’s their upside?

And if Fox “News” was sold, presumably to shut it down or change the focus, what would prevent someone, maybe even the Murdochs again, from firing up a new conservative mouthpiece? All their on-air “talent” would need to go somewhere… might as well go en masse and keep the party going.

So, as much fun as it is to imagine a world without the disinformation of Fox “News,” remember that it’s just a pipe dream. The only way Fox loses its clout is when people stop watching. And as long as you have people have the need for simple answers, having their biases confirmed, and for someone to shit on, Fox “News” will be right there.

And lastly, happy Veteran’s Day to all who have served our country with honor and distinction. My dream is that one day, the politicians stop using veterans as wedge issues and photo ops and take action to provide them with whatever they need. Our soldiers did their jobs, so we need to uphold our end of the bargain and see to their needs when they come home again.