Last week I participated in the first of several 2020 elections. This one was the primary for the empty Elijah Cummings seat in the 7th Congressional District. It was odd because it was the only race on the ballot (what with being a special election to fill the rest of his vacant term).

In April, we’ll vote again for the general election for that seat, as well as the primary for the same seat and other races of interest, like the one for president. The final vote will be the usual one in November.

Sweetpea and I ran right out at 7:00 AM to go vote and it was easily the fastest voting experience I ever had. Sure, only having one race on the ballot speeds things through. But at least at our voting place, they seemed to have their act together.

I was glad I knew who I was voting for when I walked in because if I hadn’t, it might have taken me another five minutes just to read the list of candidates. There were 24 of them, all running for that one seat. (And that didn’t include the seven Republicans running.)

I recognized four of them: one person whose family name is all over Baltimore politics, another was Cummings’ widow, another had spent a buttload of money on Facebook ads, and finally the one for whom I voted, Kweisi Mfume.

I knew he was a former president of the NAACP but I voted for him because he had occupied that same Congressional seat back in the 90s. I preferred to vote for someone who already knew how things worked in Congress, and wouldn’t need a lot of time and orientation. The dude has big shoes to fill. (I grant that someone may need to brief him on the cultural differences in the House between the 90s and now.)

What really got my attention about this voting experience was that they had on-the-spot voter registration. You can walk in there for the first time, register, and then go vote.

And that’s how it should be in every voting precinct in the country. It can’t be that hard… if the staggeringly bureaucracy that is Maryland state and local government can pull it off, how complicated can it really be?

But you won’t see this where Republicans are in charge because the last thing they want is for more people to vote. That’s why they don’t allow on-site registration, they curtail early voting, understaff and under-equip voting sites (especially in urban areas), and systematically purge the voter rolls (especially in urban jurisdictions), all under the guise of “preventing fraud.”

As anyone who’s bothered to look it up knows, on-site voter fraud is a statistically negligible event, even less than the margin of error. All the studies show it, including the one from the Bush Administration, who set out to prove that voter fraud was a serious problem and was being perpetrated by Democrats. The study found two things, Jack and Shit. The few fraudulent votes they found were for Republicans. They had to bury the whole thing because it didn’t accomplish its original goal, to pin voter fraud on the Dems and justify their voter suppression efforts.

A separate 14-year Loyola study found 31 instances of documented on-site voter fraud, out of over a billion votes. And almost all of them were garden-variety mistakes or bureaucratic errors rather than a plan to influence the election.

Yet, every time you ask a Republican about making it easier to vote, they act like there is an army of zombies and derelicts out there just waiting to vote under false pretenses. They love to point to dead people on the voter rolls as evidence of fraud. If anything, it’s evidence of shoddy bookkeeping, which should be tightened up. Wake me up when votes start to appear under those names. It just isn’t happening.

And what’s the Republican fix to dead people still being on voter rolls? Do they run a compare from death notices to the voter list? Hell no. They delete addresses of anyone who hadn’t voted recently or responded to a postcard. The other (accurate) way has no up-side for them.

On-site voter fraud would be the least effective way of election tampering, yet that’s the area where the GOP wants to concentrate their efforts, by requiring official IDs, which are selected specifically to make it easier for their people to vote rather than the enemy. Student IDs… out. NRA membership cards… in.

If you look into voter fraud at all, you’ll see that the most frequent and effective method of voter fraud involves absentee ballots. But nothing they have ever proposed to ferret out voter fraud has touched absentee ballots. I suspect that’s because the military uses them for all deployed soldiers. I suppose even those on-base use them too if they’re still registered in their home towns.

The only way to change any of this situation is to vote out those who created it. Obviously, that’s easier said than done, because of all the chicanery going on. 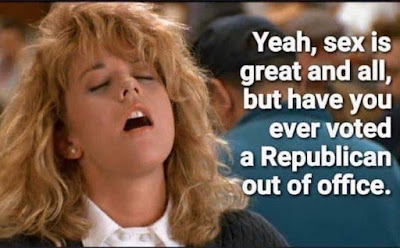 Republicans know deep down that there are more prospective and registered Democrats than there are of them, so the only way to stay in power is to rig the system. Hence all the barriers, hence ignoring the Russians, hence the gerrymandering, hence the perverting of democracy while wrapping themselves in the flag.