Last week’s Democratic debate in Nevada is the first one I actually enjoyed. Obviously, it helps that the herd has been thinned a bit, so we got to hear from everyone. But man, where the hell has Elizabeth Warren been all this time. She came out like a gangsta and gave it to Bloomberg like she just caught him banging the nanny.

Everyone was kind of testy, weren’t they? While Liz was throwing haymakers, Bernie was grumpy as always, and Amy and Pete were fighting like siblings at the kid’s table. I felt like someone should have put a parent between them.  Joe would start calmly but do a slow build so that by the time he was done, he was rolling like Bluto giving his “Was it over when the Germans bombed Pearl Harbor?” speech.

It’s not that I want to see some good presidential prospects (and Bloomberg) tearing each other down, but damn, it’s about time someone showed a little feistiness.

Speaking of Bloomberg, watching him “debate,” left me with one dominating thought: “THIS is the guy everyone is so worked up about?” He looked like a barely animated corpse. All he needed to do to complete the illusion is do the soft-shoe and sing “Puttin’ on the Ritz.”

I wanted Amy Klobuchar to do better, I really did. A couple weeks ago, I took an online quiz that was supposed to match my opinions with those of the Democratic candidates. My results came out 1) Klobuchar 2) Warren. So that made me want to give her a serious listen. But she just came across like a freshman trying to justify a spot at the cool kids’ table. Then after the debate, she cut a path straight for the exit, passing up the chance to look confident and schmoozy with the others. She looked pissed, which is probably not the image you want when you have a rep for being a mean boss.

The night’s clear winner was Warren. Her demolition of Bloomberg was essentially an audition for the job of dismantling that other crass billionaire, on a debate stage this summer. She has passion and wit and a plan for everything.

Some people like the idea of a president they “can have a beer with.” I say, screw that. If I wanted an amiable drunk, I’d vote for Norm from Cheers. I want the president to be the smartest fucker in the room. I think Liz was the smartest person on that stage by far. She’s honest and transparent about what she intends to do. Her entire career has centered on ending the enormous advantages that Wall Street and the financial sector enjoy in this country, to the detriment of everyone else who’s not filthy rich. Her track record says that she’ll do what she says she’s going to do.

Obviously, that scares the hell out of the 1-percenters, who will do anything to keep her from winning (like ignoring her in news reports and polling projections.) So I think it’s a shame that her debate performance didn’t translate into a better showing in the Nevada caucus. Maybe it was too close to the event. Maybe it was just because it was a caucus, which for the life of me, I can’t understand why they even exist.

Is it not enough just to place votes and count them up? Why go through the whole dog and pony show? This allows a fraction of the voting public to participate in the primary, which then gets blown completely out of proportion. It almost sounds like the system is rigged by a small percentage of people who love hanging out with strangers in gymnasiums for several hours and arguing about politics. I say, the hell with “tradition,” when your tradition is so useless and stupid. Cast the votes, count the votes, declare a winner.

I know the media wants to run the shocking finale before the first act is through, but there’s a long way to go here before anyone gets too anxious about the eventual Democratic nominee. Three states have spoken, we have 47 more, plus a couple territories, yet to come. I read somewhere that there have been only 70-some delegates assigned, out of over 3000 in total.

The media seems to want the story to be about the inevitability of Bernie Sanders. Even the Russians are working for him now. But lest you think it’s because he’s one of them, I think it’s the opposite. He’s the one the Russians (and Republicans) want to run against their puppet Trump. They must have the most confidence in their campaign tactics that involve him, or else they’d push someone else.

It reminds me of that scene in “All the President’s Men” where Deep Throat, (Hal Holbrook) is describing Nixon’s rat-fucking tactics to Bob Woodward (Robert Redford): (and I’m paraphrasing because it’s been so long since I’ve seen it) “Who do the Republicans want to run against? McGovern. And who did they end up running against? McGovern.”

Bernie’s not my guy. If he wins the nomination, I’ll support him, but he’s not my choice. I don’t see the point in campaigning on promises that have zero chance of being met. Even if he wins, he’ll need Congress to go along with his teardown of The System. No matter who’s in control of the House and Senate, I just don’t see that happening.

If we’re lucky, we may end up with a gradual move in that direction and if the Democrats can stack some wins, continue the process until it ends up something like Bernie’s envisioning. But as soon as the GOP regains control of anything, it’ll be killed in its crib.

And all this is assuming the new Trump-appointed judges and Supreme Court majority don’t end it before it can start.

Sweetpea did indeed turn those tough, gnarly, leathery steaks into something much more fitting.
Over the weekend, she stuck them all in the crockpot and shredded them down. Then she filled some a cupcake pan with the remains, added some vegetables and a little juice, and froze them. Instant dog meals, just nuke and serve. 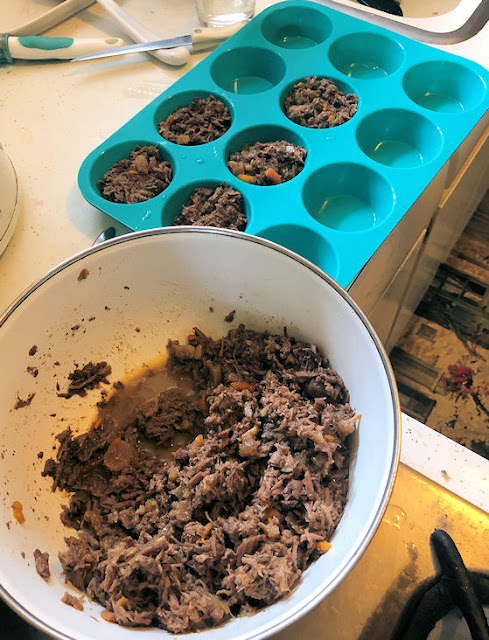 Now before you get PETA on our case for giving such low-grade meat to a dog, please realize that we have a Labrador retriever. It doesn’t matter how tough the meat is because he doesn’t bother to chew. He just laps down whatever is in his bowl and then comes back to see what else we have. He will eat a filet mignon or a bowl of sawdust with equal enthusiasm.

In our dog’s eyes, as long as we keep putting stuff in their bowl, we’re all Emeril Lagasse.

I am going to skip the debates because well they are pissing me off.
But the dog food - brilliant. I have a chocolate lab - she will eat anything and everything except an uncooked carrot. Cook it and the diva will eat it and love it. Crazy girl. This would be such a treat for my girl. We made osso bucco last weekend and there were some bones. We made sure they would not splinter and gave them to her. She acted like she won the lottery. Labs eat with such gutso don't they?

Sweetpea is hesitant to give our boy bones... I'm always trying because it's just such a "dog" thing to have a nice big steak bone.

Labs are born to eat. Ours doesn't even care what it is, if we have it, he wants it. Even raw carrots. The only things he won't eat are olives. No idea why.

Surprised you don’t have an affinity for cats, actually.

And I'm surprised you don't have an affinity for jacked up pickups with truck nutz. Or do you? Because only someone with a grade-school sense of manliness would link liking cats with masculinity. Or in other words, a typical Trumpanzee.

I love cats and dogs and have neither because of our landlord's rules, however, I do have a crockpot(lol), and I've found if you leave something in them for lots and lots of hours (way to go Sweetpea!) any meat will will be easy on our teeth(lol) I just used mine yesterday to make cornbeef and potatoes, and I made some cabbage in a regular pan. I hope all the leprechauns will be happy with me so we all celebrate with a pot of gold this month.(lol) Hugs, RO

My previous 20 years as an apartment dweller was much the same. I had to live vicariously though the pets of others. Sweetpea had the dog when I met her so it was a package deal.

And I tried a piece of the ghetto steak after it was crock potted... it was still tough as shoe leather. Which, like I said, didn't matter to the dog. Toughness of meat is irrelevant if one doesn't bother to chew.

Sigh. Apparently I'm going to have to PETA you for feeding your lab sawdust. Why do you make me do this to you? LOL

PS I'm more of a pressure cooker guy. Who has "slow cooker time"?

The slowness is a feature. The beauty of using a crockpot is that you set it up in the morning and walk away. Go to work, do whatever. Then when you come home, it's done.

I used to go to a place in Albany NY that made pressure cooker fried chicken. It was tremendous.